Hundreds of photos of people with Down syndrome were displayed in New York City on Saturday. 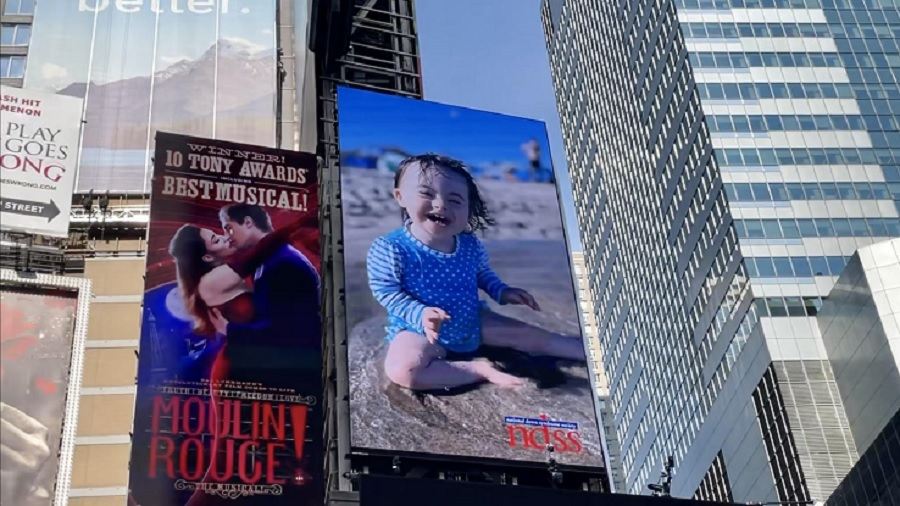 A photo of Stream contributing senior editor Tom Sileo's daughter, Natalie, appears among hundreds of images of children and adults with Down syndrome shown in Times Square in New York City on September 17, 2022.

On a busy Saturday morning in the heart of New York City, Down syndrome awareness took center stage.

For one special hour, about 500 children and adults with Down syndrome appeared on a huge screen in New York’s iconic Times Square. One of those incredible gifts from God was our 2-year-old daughter, Natalie.

From the moment we arrived in New York City from Florida, our family was welcomed by the National Down Syndrome Society (NDSS) and amazing people with special needs and their families. They treated Natalie like a rock star, which put a smile on her face that was big enough to light up midtown Manhattan.

Thrilled to meet @pickard05 & the incredible @NDSS team this afternoon in NYC! Photos of Nat & many other amazing kids with Down syndrome will be shown on 2 big screens Saturday morning in @TimesSquareNYC! #Downsyndrome pic.twitter.com/btNxXRCdYC

One of the first people we met was Kandi Pickard, the CEO of NDSS and mother of a wonderful child with Down syndrome. As she highlighted in a press release sent out just before the festivities kicked off, the NYC event was all about bringing the special needs community together.

“We are stronger when we speak with one voice, and as a community, we are breaking down barriers like never before,” she said in the release.

Kandi was right. Being suddenly surrounded by hundreds of families just like ours in one of the world’s biggest cities was a warm and unique feeling.

If Natalie can make it here, she can make it anywhere. Times Square! Way to go, Nat. #DownSyndrome @NDSS @Nationals #NATitude pic.twitter.com/UOzPLnnB2u

It’s hard to express how it feels to see your precious child on a massive screen being watched by thousands of people during a large event that was also live-streamed on Facebook. What struck me the most, however, was looking around Times Square that morning and seeing a sea of people with Down syndrome and their loved ones. They were smiling and cheering while exchanging high-fives and hugs.

When we found out our daughter had Down syndrome about three years ago, we initially felt sad, confused, isolated and scared. Seeing her photo and hundreds more that morning in New York gave us an even greater appreciation for families that started this unique journey long before (and after) we did.

The images we saw of people with Down syndrome who had passed away or were bravely battling health problems served as the biggest reminders of all. We must keep spreading awareness and supporting research and other efforts to help people with Down syndrome and special needs. We should also pray that more Americans see the beauty and boundless positivity embodied by these extraordinary people. They are shining lights amid the darkness that too often clouds our world.

Since 1995, NDSS has held its flagship Buddy Walk in New York’s iconic Central Park. It is the biggest of 150 similar events in cities and towns across America. You can search here for a Buddy Walk in your local community.

“Our Buddy Walks show the world the amazing accomplishments of individuals with Down syndrome and help create an incredibly memorable day where friends, family, and supporters come together to celebrate Down syndrome,” Kandi said.

Indeed, it was a memorable day full of smiles, laughs and picture perfect early fall weather. Natalie and other children played games and ate cotton candy while we all listened to stirring speeches by people with Down syndrome and proud parents and siblings who have helped them along their journey. It was impossible to listen to their remarks without coming away motivated and inspired.

After having a few days to relax and reflect upon returning to Florida, the biggest takeaway from this whirlwind weekend was that no matter what challenges lie ahead for Natalie, she will never be alone. God and a huge community of truly extraordinary people will always be watching over her.

“Did you have fun?” I asked Natalie after watching a video our oldest daughter shot during the Times Square event.

“YEAH!” she said with that same big smile.