Stream contributing senior editor Tom Sileo shares an update on his 2-year-old daughter Natalie, who has Down syndrome. 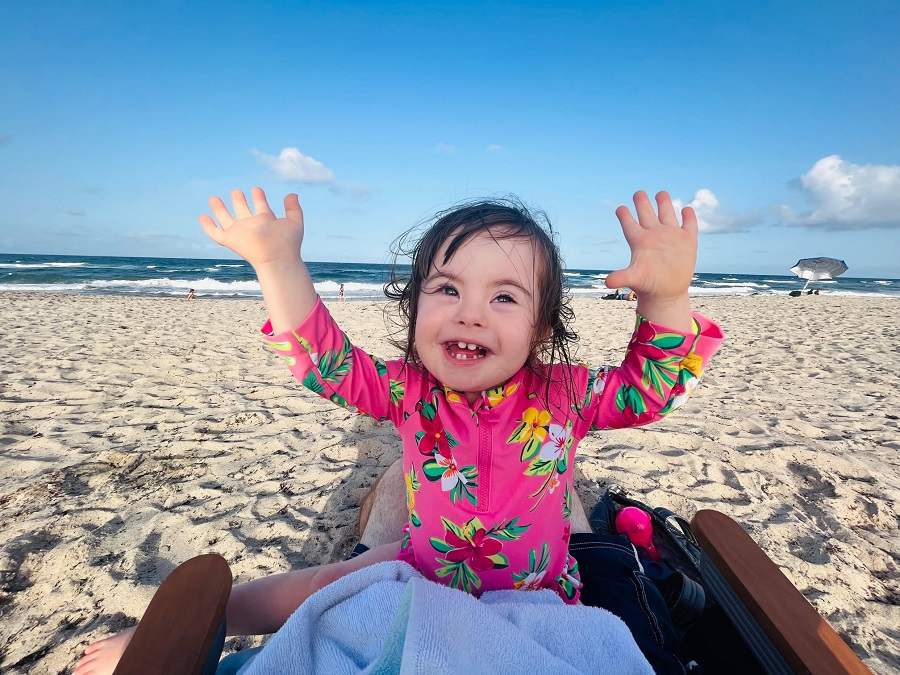 Natalie Sileo, a 2-year-old girl with Down syndrome, recently enjoys a fun day on the beach in Florida.

I was terrified when we were originally told that our youngest daughter has Down syndrome. Two and a half years later, I can’t imagine the world without her.

To me, Natalie embodies what life should be all about: happiness, humor, love and compassion. While it understandably irks some parents of kids with Down syndrome when someone says their child is “always smiling,” it doesn’t bother me at all. While every kid occasionally cries or has a bad day, I can honestly say I’ve never seen a human being smile as much as Natalie. She is a constant source of pure joy.

Whether it’s acing a physical therapy session or learning a new word or sign, Natalie loves accomplishing new feats. She will often say or shout “I did it!” while sporting a beaming smile.

What makes Natalie happiest, however, is making other people happy. A few nights ago at a local restaurant, Natalie would not rest until she waved “hi” and blew kisses to every single restaurant patron waiting to be seated. The age or appearance of the person she was waving to didn’t matter; Nat just wanted to brighten their day. When it was time to be seated, it felt like everyone in the room were friends who had known each other for years.

People with Down syndrome and other special needs are not burdens on society. They are treasures who can teach us all a great deal. In a country that’s too often busy tearing itself apart, shining lights like Natalie remind us of the bonds that we as Americans – and all human beings – still share.

Missed the @Nationals game today — went for a swim instead with Nat! #DownSyndrome #NATitude pic.twitter.com/AgwPwvMVcR

“God sees something in you,” Stream founder and publisher James Robison said shortly after my wife and I found out that Natalie had Down syndrome. “There’s a reason He has chosen you to raise this precious child.”

It’s been almost three years since that conversation with James and his wife Betty, but I still think about it often. Back then when I would pray, I would often ask God two questions: Why me? Why us?

Today, those questions are much different. Instead of asking why, I wonder how we could be so blessed to have such a wonderful, loving person in our daily lives. God truly sent an angel to our family and this world.

In just two and a half years, Natalie has completely changed my outlook on life. Indeed, Nat, “you did it.” We love you.