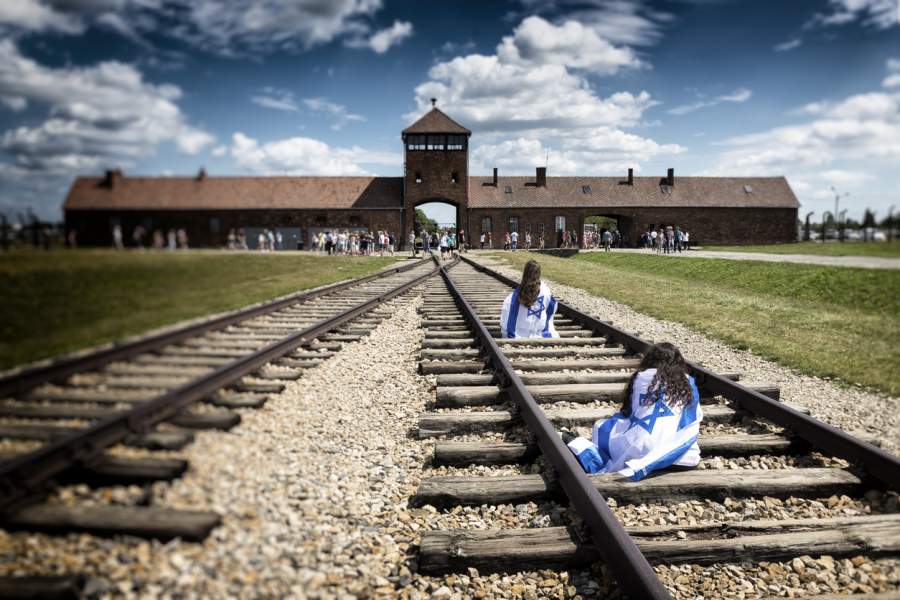 Auschwitz - Birkenau, Poland - August 11, 2019:Young Israeli girls pray on the railroad tracks in front of the main building of Birkenau concentration camp. People from all over Europe were brought here during World War II.

Ahead of Pope Francis’ visit to Iraq, the Western media’s fanfare over the “historic” event may have struck some as premature.

In my last column, I offered a perspective that would have otherwise been left unsaid: Skepticism. The papal journey came late, and only after years of strife in Iraq and silence from the Vatican. What if the pope failed to substantially address Iraq’s troubles, and the West’s part in bringing them about?

In fact, I called on Pope Francis to apologize to the people of Iraq. First on behalf of the Western nations who plundered and abandoned them in turn. Then for the Western Christians — starting with their pontiff — who failed to intervene.

But then something important happened. Something that, in a way, proved me wrong, and also made Pope Francis’s journey truly live up to its “historic” billing.

On Day One of the papal visit, the pontiff stated: “I come as a penitent, asking forgiveness from Heaven and our brothers for so much destruction and cruelty.”

Imagine! Pope Francis, the most prominent leader of Christians in the Western world, drew the attention of 1 billion people from the outside world, and shined a light on the people of Iraq. It was as if Pope Francis had sensed the worries of the region and generously moved to share them. And the positive effects are already showing themselves.

Has the West at Last Started to Care?

My Iraqi friends tell me of a great feeling of renewed hope. They hope even for the beginnings of a long-overdue solidarity. Will the people of the Western world, who followed the pope’s visits to scenes of genocide, at last start to care?

The pope’s penitence, and his recommitment to those living under threat of violence in the Middle East, was unspeakably important. In fact, it was urgent. And such acts of solidarity will remain urgent for the foreseeable future. Why? Because no matter how soon they come, they’re late.

Firing the Shot on the Race to Save Our Century

Pope Francis’ words to the Iraqi people were inspiring. But they also should remind us of just how great the stakes are. Francis was elected in 2013, just as John Zmirak and I were finishing work on our book The Race to Save Our Century. The book argued that the 21st Century was on course to be even bloodier than the 20th. And hence the bloodiest in human history. This would happen unless the world changed course, and adopted an unrelenting respect for the incomparable dignity of every human person, as the image of God.

We wrote that, just as the genocides and democides of the 20th Century began with strife among ancient peoples with differing faiths, so would ours. That very year, we saw the rise of ISIS and the beginning of a campaign of genocide against Kurds, Yezidis, Iraqi Christians, and other minorities.

And now, running parallel to these atrocities, we see the rise of China. As if to claim the mantle of the Nazis and the Soviets, the Chinese Communist Party (CCP) has already begun its own 21st Century genocide.

Under the rule of the CCP, the Uyghur Muslim people of East Turkistan are rounded up, robbed of their faith traditions and their families’ integrity, and kept in concentration camps by the millions.

We now have confirmation that Uighur prisoners are systematically raped and subjected to forced abortions. They’re even cut open alive for organ-harvesting — their body parts sold for the financial benefit of the CCP.

Use your Decades Well

The world needs what John Paul II called a “Great Campaign” of solidarity with the vulnerable. We must shine a light on all who would violate the dignity and worth of any human person — from the Yezidi child in the Levant to the Uighur woman in the Chinese concentration camp.

“How we have prayed, in these years, for peace in #Iraq!” Pope Francis tweeted at the beginning of his visit. “God always listens. It is up to us to walk His paths.”

That’s right. Pray, of course. But also walk. Use the graces you receive in prayer. And there are many opportunities on the horizon for us to walk on behalf of the vulnerable. But it will require us to break free of the shallow conventions of political speech that tend to reign as the dark clouds of genocide gather.

We Can Make a Difference

The monopoly mainstream media have referred to the persecution of the Uighur as a “complication” for U.S.-China trade negotiations. No, it’s far more than that. We must frame it as an opportunity for America to help free the Uighurs.

With the China Olympics approaching, we will have a similar opportunity: To bring the whole world’s attention to the cruelties which the CCP will sweep under the rug.

And in our own private lives, we can do another meaningful thing almost every day. We can refuse to rely on consumer products made by slave workers in China. These products currently dominate many corners of the American market, including religious articles.

Speak up for peace publicly, even if it puts you at odds with your neighbors. Tell people about the plights of the vulnerable. Let’s become the first generation of people in modern history to fully halt a genocide in real time — before it’s accomplished. Let’s turn the phrase “never again” from a wistful hope to a rock-solid promise. Maybe add to it: “Not on our watch.”