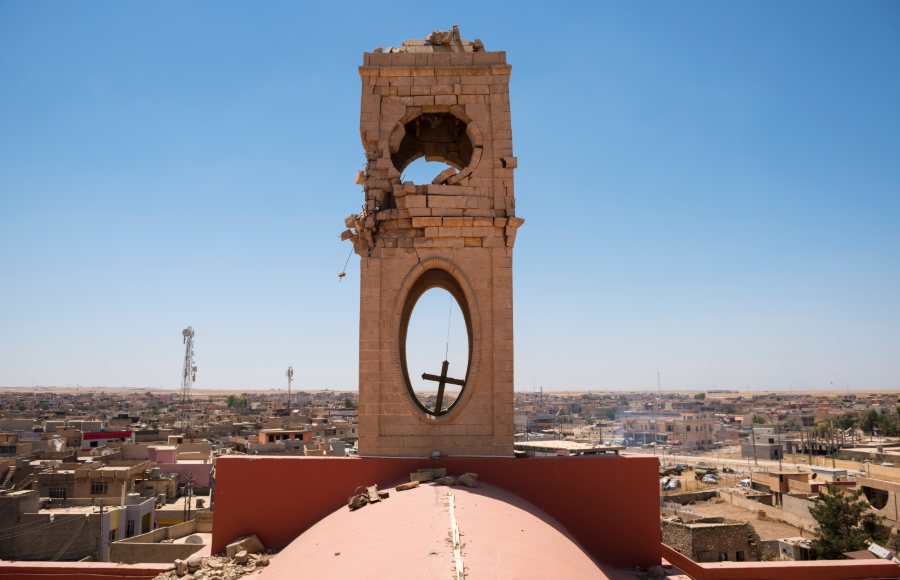 The Western media have already begun celebrating Pope Francis’ upcoming visit to Iraq. But in the region itself, I know I wouldn’t be alone in asking: Is it even good news?

Iraq is more than just a prop on the global stage. It’s the ancient birthplace of Abraham. And the home of both the world’s first Christian community and first Shi’a Muslim community. Surely it’s impossible to overstate the importance of a meeting in Iraq between Pope Francis — the leader of the largest Christian denomination in the world — and Grand Ayatollah Sistani, the most prominent leader of the world’s Shia Muslims.

But many in Iraq and the surrounding region will be watching the event askance. They’ve seen years of unspeakable violence at their doorsteps, anemic responses from local leaders, and the near-silence of the West. These beleaguered people will have both more to hope for and more to fear from the papal visit. It will shine a global spotlight on their struggles.

Who Listens to the Victims?

I’ve spent years in regular contact with those who have the most to lose in Iraq and the surrounding region. I’ve spoken with countless people. They range from U.S. service members to vulnerable minority communities, from Muslim imams to Orthodox priests. They openly tell of their foremost concerns to anyone who will listen. Yet so few of us seem willing to.

With this momentous meeting just around the corner, I hope that at last Pope Francis, Grand Ayatollah Sistani, and you, the world, will consider the factors outlined here.

Lives Are at Stake

Like its neighbor Iran, Iraq is majority Shi’a. It’s home to 15% of the world’s 1.6 billion Muslims. Ayatollah Sistani is of a school of Shi’a Islam that shies from political advocacy. He believes it ought to be kept separate from religious leadership. This protects society from the pitfalls of theocratic government.

The Iranian regime runs exactly counter to that philosophy. It practices a theocratic, explicitly political Islam. Iran’s theocrats have spread proxy wars throughout the region, called for Israel to be wiped off the map, and made a name for themselves as the world’s foremost sponsor of terrorism.

In response, Iraq’s Grand Ayatollah and his followers have courageously preached tolerance. It was only when their very existence was threatened that they took up arms and lay down their lives in the tens of thousands fighting against al Qaeda and ISIS.

Iraq has been torn apart since 2003. If it weren’t for the extreme sacrifices and courage of some Iraqi people and US military servicemen, the forces of darkness led by Al-Qaeda in Iraq would have prevailed.

After years of perseverance against both insurgent violence and a virtual civil war in Iraq, stability began to take root once again by 2008. It was a fragile stability, but with painstakingly careful and thoughtful military leadership on all sides, Iraq and the United States formed a robust partnership against Tehran’s terrorist proxies and transnational terrorists. Lasting peace in the region was finally in sight.

But the Obama administration’s sudden and complete troop withdrawal in 2011 cynically squandered what all the sacrifices of the US military had finally begun to deliver: A regional ally, with a representative government, ready and willing to be the vital bulwark the Middle East needed for its stability.

Obama sold this betrayal to the American media with cheap, petty rhetoric about “Bush’s war.” And so the Western world celebrated as we left Iraq — snatching defeat from the jaws of victory. Obama unconscionably and cynically left behind the Iraqis who had fought side-by-side with us. He shrugged as millions of innocent people were targeted by the remnants of terrorist forces that our partnership had defeated.

And everyone knows the darkness that came next. These forces of evil, who could only barely cling to existence like underground vermin, now had their opportunity to regroup. They soon formed ISIS, which wreaked vengeful havoc on our Iraqi friends. In the city of Ramadi alone, 500 families with members who had worked directly with the U.S. were exterminated down to the last niece or grandson.

Throughout all these years, what did Pope Francis do for our brothers and sisters in Iraq and other affected lands? As a Western Christian, I can’t even recall a single clear statement from the Vatican. Can you?

I do recall many occasions when Pope Francis spoke vaguely and abstractly about human dignity. But in Pope Francis’ Christian West, talk of genocide, of justice, and of war is a cheap commodity. “Never Again,” we blithely say, denouncing the Nazi Holocaust and American slavery from the safe distance of many decades.

I must admit I cringed when I last heard Pope Francis say those words, “Never Again.” They’ve become so empty of force and meaning that he could repeat them throughout his pontificate, never explicitly connecting them to the mass-enslavements, slaughters, and genocides that tore through the Middle East.

I know that for many local men, women, and children, “Never Again” must sound like a cruel joke.

And that is just what I fear Pope Francis’ visit could turn out to be. A grand, staged satire of the ongoing carnage they have endured. A “Never Again” spoken thoughtlessly, and for the benefit of a comfortable, self-congratulatory West.

Such a visit would be a black blot on the world. One which could not be removed for generations. In order to avoid that calamity, Pope Francis and Grand Ayatollah Sistani would have to speak a clear, firm, and sincere “Never Again,” renewing the phrase’s original meaning.

A Promise, Not a Cliche

The truth is that too few Christians in the West have had the opportunities I have had, to visit and speak with vulnerable peoples throughout the Middle East.

I once had the honor and the privilege of praying with a Yezidi community at a funeral for their fallen. I stood barefoot with them in a graveyard, surrounded by the rubble of war. I knew I wasn’t only in the presence of some small and unimportant minority. These Yezidi are an ethnic bridge among all Semitic peoples.

And so, in a way, are each of the peoples of the region. These lands gave birth to Abraham. To Isaac, to Jacob, and to Jesus Christ. They give the world its light and its inheritance, and now — plunged into darkness and chaos — they wait for the world’s assistance.

“Peace, Peace!” But There Is No Peace

“You are all brothers,” goes the slogan on Pope Francis’ preprogrammed visit. These words too will be empty without the promises our brothers in the region deserve.

Along with them I hope the pope and grand ayatollah make a clear commitment. He must embrace the preferential option for the vulnerable. This principle puts vulnerable, destabilized, and stateless peoples first.

I hope the two leaders acknowledge the dangers of exploitation and avarice in an area so rich in resources. They must call for sincerity on the part of international powers, whose interventions must be judged by the standard of each ancient people’s best interests.

And I hope Pope Francis, on behalf of the whole Christian West, asks forgiveness. We privileged men and women of the West, who owe so much to our forebears, have had years to show our solidarity with these brothers and sisters. Too many of those years — especially during the genocidal violence that erupted under President Barack Obama — came and went as squandered opportunities.

The tragedy that recently befell Iraq will surely repeat itself, there or nearby, unless world leaders like Pope Francis and others refuse to let them. I hope Pope Francis, inspired by the courage of Grand Ayatollah Sistani, will say “Never Again” once more, and mean them.

With the eyes of the world on them during the upcoming visit, it will be up to these two men to lead the world and not mislead it.

I pray they lead. And I promise I will follow.