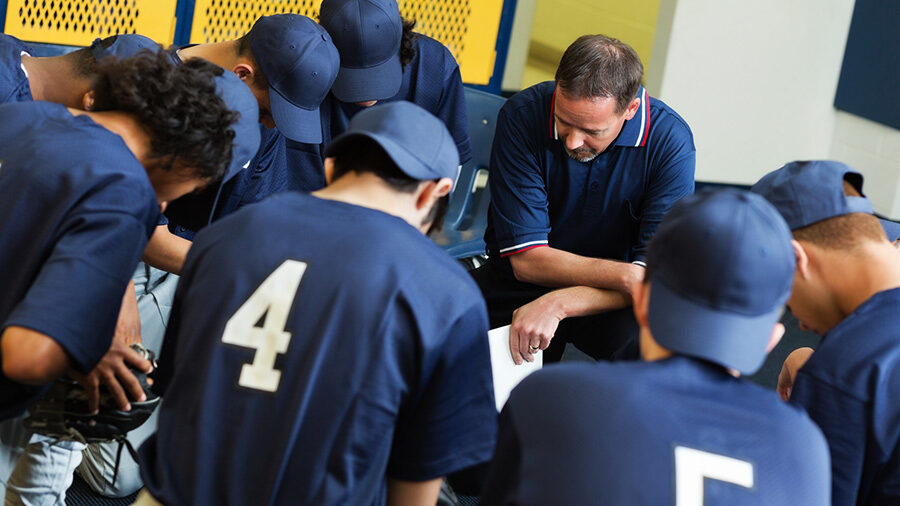 With professional sports increasingly embracing the LGBTQ agenda, Christian athletes have been anticipating a time when they might have to choose between their livelihoods and their faith.

That time has come.

Three times in less than two months, athletes refused to give public support to an LGBTQ ideology that contradicts and mocks their faith. In doing so, some experienced the loss of playing time, as well as outright contempt.

Five pitchers from the Tampa Bay Rays chose not to wear rainbow-themed uniform accessories when the Rays played the Chicago White Sox on June 4, “Pride Night” at Tropicana Field, the Rays’ home park. Those accessories included caps with the “TB” logo in rainbow motif, and adhesive patches with the Rays’ sunburst emblem in rainbow colors.

Reliever Jason Adam, who leads Rays’ pitchers in appearances, was among those who chose not to wear the themed patches and caps. He explained why after the game.

A lot of it comes down to faith, Adam said. So it’s a hard decision. Ultimately, we all said we want them to know that all are welcome and loved here. But when we put it on our bodies, I think a lot of guys decided that it’s just a lifestyle that maybe — not that they look down on anybody or think differently — we don’t want to encourage it if we believe in Jesus, who’s encouraged us to live a lifestyle that would abstain from that behavior, just like (Jesus) encourages me as a heterosexual male to abstain from sex outside of the confines of marriage. It’s no different.

It’s not judgmental. It’s not looking down. It’s just what we believe the lifestyle he’s encouraged us to live, for our good, not to withhold. But again, we love these men and women, we care about them, and we want them to feel safe and welcome here.

The tolerant, inclusive LGBTQ community and its allies were not amused.

“FACT CHECK: Jesus never said a word about homosexuality, but he did tell Tampa Rays pitcher Jason Adams (sic) not to be a judgmental, holier-than-thou (rectal opening),” tweeted Devin Green, an Internet comedian who mocks Christianity as the satirical character “Betty Bowers.”

“Honestly, I’m glad they took it off. These (rectal openings) don’t deserve to share in our beauty,” tweeted the gay editor Nico Lang, who contributes to Vice and the Canadian LGBTQ website Xtra Magazine.

Since the Rays allowed players and staff not to wear the themed trimmings if they chose, management prevented none of the five pitchers from playing. Two even pitched in relief. But in the two other instances, players took themselves out of the lineup rather than wear uniforms supporting LGBTQ ideology.

On July 28, seven Australian rugby players refused to compete in an important match rather than wear a jersey featuring horizontal rainbow stripes. Their club, the Manly Warringah Sea Eagles, thus became the first in Australia’s National Rugby League to use uniforms to express LGBTQ solidarity.

Unlike in Tampa Bay, the rugby club from suburban Sydney had no choice but to make wearing the jerseys mandatory. League rules insist that all of a club’s players wear the same jersey design.

The seven players, who come from Polynesian and European backgrounds, “are not wearing the jersey as it conflicts with their cultural and religious beliefs,” Sea Eagles coach Des Hasler said before the match.

Their spirituality is a central part of their well-being. These young men are strong in their beliefs and their convictions, and we will give them the space and the support they require. The players will not play on (July 28) and we accept their decision.

That decision forced the Sea Eagles to field a patchwork lineup. As a result, the club sustained a loss that could prove costly in its quest for the playoffs.

Nevertheless, a Tongan pastor, Rev. Ma’afu Palu, said he was “very proud” of the players’ stand. “Christianity takes a very strong root in our people,” he said. “Whatever the Bible says is very authoritative to us.”

Another Australian rugby star, Israel Folau, a Christian of Tongan ancestry, sacrificed commercial endorsements and his international career in 2019 for his faith. As The Stream extensively reported at the time, Folau paraphrased on Instagram the Apostle Paul’s declaration that unrepentant homosexuals disqualified themselves from salvation.

Two days after the Australian rugby players’ boycott, an American soccer player took herself out of the lineup when she refused to wear a similar jersey.

Jaelene Daniels from the National Women’s Soccer League’s North Carolina Courage declined to wear a jersey with the numbers and team crest in rainbow colors. The Courage wore the jerseys during a July 30 game that followed the club’s “Pride Festival,” designed to “celebrate the LGBTQIA+ community with our fans, players and staff,” a team release stated.

Unlike the baseball and rugby athletes, however, Daniels received no formal support from her club.

North Carolina coach Sean Nahas responded by not placing Daniels on the roster of eligible players for the game. Until that point, Daniels had played in all nine of the Courage’s matches, starting six.

“Jaelene will not be rostered tonight as she has made the decision to not wear our Pride jersey,” said a team statement. “While we’re disappointed with her choice, we respect her right to make that decision for herself.”

Nahas made the decision to appease his LGBTQ players.

“It’s the second time that they’ve worn those jerseys and I know how powerful it was for them, and how much it means for them,” Nahas said. “And my number-one thing was nothing is going to come in between that, because that’s important to them and that means something to them, and I stood by that.”

The Stream covered a similar controversy involving Daniels. In May 2017, as Jaelene Hinkle, she left the national team’s training camp two weeks after the United States Soccer Federation announced plans for the women’s team to wear rainbow jersey numerals in overseas exhibitions for “Pride Month” that June.

The defender played eight times for the United States before that decision. But not since.

Daniels’ choice to reject LGBTQ activism reflects her faith. When the Supreme Court legalized same-sex marriage in 2015, she tweeted, “This world is falling farther and farther away from God… All that can be done by believers is to continue to pray.”

I believe with every fiber in my body that what was written 2,000 years ago in the Bible is undoubtedly true. It’s not a fictional book. It’s not a pick and choose what you want to believe. … My heart is that as Christians we don’t begin to throw a tantrum over what has been brought into law today, but we become that much more loving. That through our love, the lost, rejected, and abandoned find Christ.

Those views continue to make an impact. When the Courage re-signed Daniels in December, fans became so outraged that the club actually apologized in a statement defending the move.

In response to the recent news of re-signing Jaelene Daniels, we as a club acknowledge the impact this announcement has on our community, the statement read. We’ve spent the past few days reading your messages and reflecting on our actions. We are very sorry to all those we have hurt, especially those within the LGBTQIA+ community.

The decision to re-sign Jaelene was not made lightly and included significant conversations between organization leadership and Jaelene. The priority expressed in those conversations is the safety of our players and maintaining an inclusive, respectful space for the entire team.

That statement included several club projects to support the LGBTQ movement and “remedy the harm” that Daniels’ signing represented. One was the commitment to LGBTQ-themed jerseys.

Daniels responded with a statement that praised the club and her teammates. It included the following:

I remain committed to my faith and my desire for people to know that my love for them isn’t based on their belief system or sexuality. I pray and firmly believe my teammates know how much I cherish them, respect them and love them. It’s an honor to know them, to play with them and to love them.

How can anyone believe that a player expressing such affection is a threat? Because LGBTQ activists and their allies consider anybody who displays personal reservations or raises legitimate questions as a threat.

Only appeasement and blind capitulation will be tolerated. Only those who agree will be included.

Joseph D’Hippolito has written commentaries for such outlets as the Jerusalem Post, The Federalist, Human Events, American Thinker and Front Page Magazine. He works as a free-lance writer.