An Australian sports controversy could signal a dark future for Christian athletes in the United States. 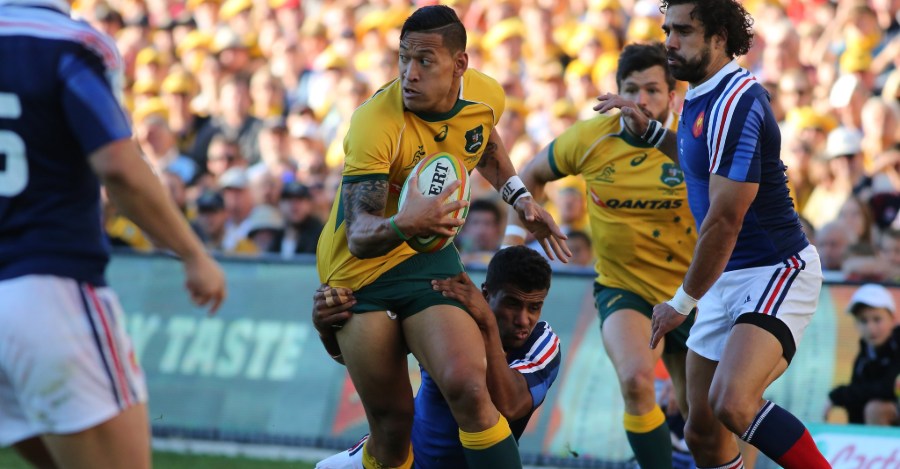 During his 12-year rugby career, Folau won three individual awards, led the Waratahs to the 2014 Super Rugby championship and played 73 times for Australia. He also owns Super Rugby’s career record for tries, rugby’s version of a touchdown but worth four points. His fate rests on a hearing next week.

Since Christians are prominent in American professional sports, and since the Biblical world view can’t support the LGBTQ lifestyle, athletes might have to choose between their beliefs and their careers.

Professional sports’ role in promoting the LGBTQ lifestyle intensifies the conflict. The NBA and the WNBA became the first leagues to sponsor a float in New York’s Pride Parade. In 2017, NBA Commissioner Adam Silver even waved a rainbow flag while standing on the float. Some participants wore black T-shirts with the NBA logo or team logos in rainbow colors, shirts that fans could buy through the NBA’s website.

But the embrace goes beyond marketing. In 2016, Silver moved the 2017 NBA All-Star Game to New Orleans from Charlotte after North Carolina’s legislature passed a bill that included prohibiting transsexuals from using public restrooms not associated with their biological sex. When that section of the bill was repealed, Charlotte received this year’s NBA All-Star Game.

“I Just Felt So Convicted in My Spirit”

One Christian athlete spoke up. Jaelene Hinkle, a defender in the National Women’s Soccer League, left the United States’ national team’s camp in June 2017 because the squad would wear jerseys with rainbow numerals for two games overseas. Coach Jill Ellis and two of the team’s biggest stars, Megan Rapinoe and the now-retired Abby Wambach, are lesbians.

When the Supreme Court legalized same-sex marriage in 2015, Hinkle wrote on Twitter, “This world is falling farther and farther away from God. … All that can be done by believers is to continue to pray.” She used her Instagram page to elaborate:

“I believe with every fiber in my body that what was written 2,000 years ago in the Bible is undoubtedly true. It’s not a fictional book. It’s not a pick and choose what you want to believe. […] My heart is that as Christians we don’t begin to throw a tantrum over what has been brought into law today, but we become that much more loving. That through our love, the lost, rejected and abandoned find Christ.”

“I just felt so convicted in my spirit that it wasn’t my job to wear this jersey, and I gave myself three days to just seek and pray and determine what [God] was asking me to do in this situation.” – Jaelene Hinkle

Last year on CBN’s “The 700 Club,” Hinkle explained why she wouldn’t wear the rainbow jersey. “I just felt so convicted in my spirit that it wasn’t my job to wear this jersey, and I gave myself three days to just seek and pray and determine what [God] was asking me to do in this situation.”

The LGBTQ community was not amused.

In her first game after that interview, fans in Portland, Ore. booed Hinkle every time she touched the ball. Six weeks later, Ellis invited Hinkle to her first national camp since 2017 but cut her after three days. That invitation angered LBGTQ fans.

“(Hinkle) has never once acknowledged the humanity and struggle of LGBT people, and instead used a platform which actively demonizes the LGBT community,” Becca Homa told SB Nation. “I’m most concerned with the message it sends to young queer fans and players within the U.S. youth system. They shouldn’t for one second feel any discomfort about who they are or question if they deserve the same respect.”

SB Nation’s Kim McCauley, a transsexual, wrote that Hinkle might have been the best available player at her position.

“U.S. Soccer would like us to believe that Hinkle was called up, played in camp for three days, and then sent home entirely for soccer reasons,” McCauley wrote. “If we take its statements at face value, we’re forced to conclude that Jill Ellis has a nonsensical method for evaluating fullbacks. Hinkle is the best American left back in NWSL by most empirical measures, and by the eyes of the club coach (Paul Riley) who has developed the most USWNT players during this World Cup cycle.

“If Ellis simply doesn’t rate Hinkle highly enough to give her a legitimate shot in camp … then why was she called up in the first place? Why spit on your queer fans, who may now feel like you stole their money as part of a dirty trick, if Hinkle wasn’t really in the plans?”

Since leaving camp in 2017 over the jerseys, Hinkle has not played for the United States.

On April 9, when Tasmania made gender optional on birth certificates, Folau wrote on Twitter: “The devil has blinded so many people in this world, REPENT and turn away from your evil ways. Turn to Jesus Christ who will set you free.”

On April 14, Rugby Australia announced Folau “committed a high-level breach of the Professional Players’ Code of Conduct warranting termination of his employment contract.” Folau’s appeal April 17 resulted in the hearing.

Meanwhile, an English player, Billy Vunipola, received a warning from England’s Rugby Football Union for liking Folau’s Instagram post and for writing this on his own account: “Man was made for woman to pro create that was the goal no?” (sic)

Regardless of how his appeal goes, Folau said he would sacrifice his career for his beliefs.

“First and foremost, I live for God now,” he told the Sydney Morning Herald. “Whatever He wants me to do, I believe His plans for me are better than whatever I can think. If that’s not to continue on playing, so be it. In saying that, obviously, I love playing (rugby) and if it goes down that path, I’ll definitely miss it. But my faith in Jesus Christ is what comes first.”

Will big-name Christian athletes in this country have to make the same choice? Most likely, and sooner rather than later.