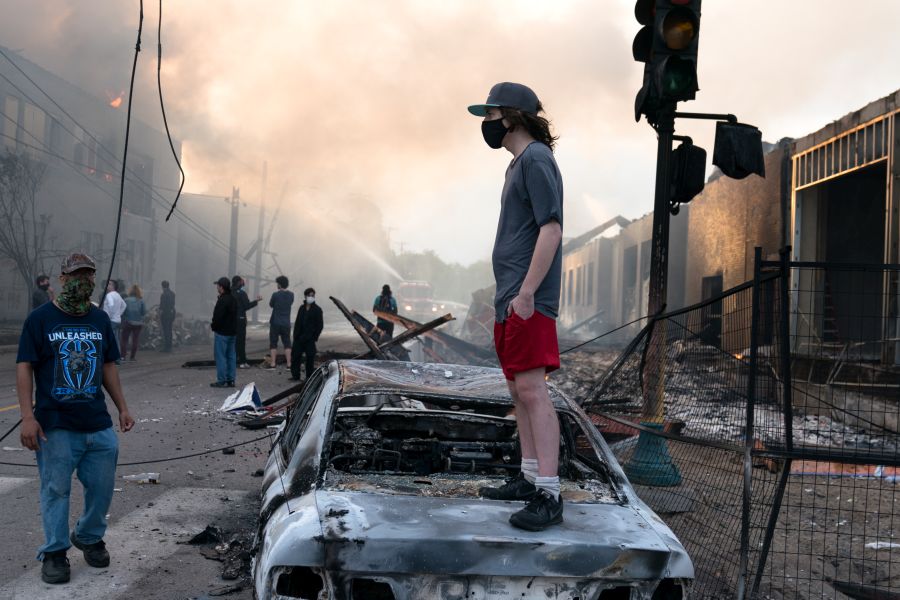 A man stands on a burned out car on Thursday morning as fires burn behind him in the Lake St area of Minneapolis, Minnesota.

As city after city in America is under assault, with buildings on fire and bloodied bodies laying in the streets, we need to unite in our condemnation of these violent riots.

There is nothing righteous about looting. Or bashing someone over the head with a skateboard and pelting him with stones. Or vandalizing the store of a black business owner.

This is chaos. This is anarchy. This is lawlessness. This is wrong.

We can be outraged over the killing of George Floyd and aggrieved over the sin of racism without resorting to this.

Here are four reasons why these race riots do far more harm than good.

All Were United in Horror at the Death of George Floyd

First, they came at a time when more and more Americans were willing to talk about apparent racial injustice. As tweeted by the influential black rapper and podcaster, Zuby,

The USA temporarily had a moment where virtually ALL Americans were united in empathy and sympathy, over the pointless, awful killing of a fellow citizen.

People of ALL colours and ALL political stripes, unanimous on an issue of clear injustice.

Now this unity and sympathy has been divided, diluted and misdirected as people fight on the streets, steal from their neighbours, and torch their own communities.

I’ll say it again. Some people thrive on division and anger. They don’t want solutions.

(A hat tip to my colleague John Zmirak for these references. He responded to Zuby’s tweets with his own: “The looters in Minneapolis no more represent black Americans than the neo-Nazi thugs in Charlottesville represented me.”)

As I emphasized in my last article, “Hope for Black Americans,” this was a rare time when law and order conservatives like Sean Hannity, Laura Ingraham, and Dan Bongino united with Christian conservatives like Franklin Graham in condemning the killing of a black American by a police officer. Yet the focus has now shifted to the violence and lawlessness of the riots. How on earth is this positive or helpful?

Second, the riots paint a negative picture of black Americans, as if this is what “they” do. As expressed in a May 31 email, conservative Christian activist Scott Lively “contends that the purpose of Black Lives Matter rioting is to INCREASE Racism to justify the Marxist race-war narrative, and laments that too many conservatives and constitutionalists fall into the trap of lumping the innocent majority of Black Americans with the trained thugs of the BLM and the useful idiots who run with them.”

Obviously, Lively’s words are confrontational and even inflammatory, and one can debate his larger thesis. But his overall point is clear: the race riots, allegedly carried out in the memory of George Floyd, play into the worst racial stereotypes of black Americans. I ask again: How on earth is this helpful?

Appealing to Our Worst Instincts

Third, these riots are destructive in their very nature, appealing to our worst instincts. As I tweeted on May 31, “Peaceful protests can be righteous, godly, and powerful, even reflecting the Spirit of Christ. Rioting and looting are unrighteous, ungodly, and destructive, reflecting the spirit of lawlessness and chaos and murder. Which spirit is that?”

One of my black friends, a historian with a strong social conscience, said to me, “Anything that comes to kill steal and destroy is the enemy” (meaning, from Satan; see John 10:10). Precisely so.

In response to my tweet, someone challenged me, saying, “Forgive me if I’m wrong but didn’t Jesus clear out the temple with a whip?”

I replied, “1) He acted in perfect harmony with the Lord. We often do not. 2) He did not kill anyone. He did not set the Temple on fire. He did not destroy the businesses of honest, hardworking people. I could go on and on. Surely you must know this.”

The Riots Are Orchestrated by Outside Bad Players

Fourth, there appears to be strong evidence that these riots are being aided and abetted by bad players.

Pastor Jim Garlow reported via email on May 31,

A couple of hours ago, some bussed-in protesters were attacking the La Mesa, CA police station only a few miles from where I live.

A close friend of mine who is black has reported that the Minneapolis Airport was full of people today being flown in to create havoc. Many were being bussed in. And now we are hearing reports of pallets of bricks being dropped off at street corners in cities to give weapons to the anarchists. The George Soros types have found their moment. We pray for our President, governors and mayors.

This was confirmed by Minnesota Attorney General Keith Ellison, himself a liberal Democrat and an African American Muslim: “We have evidence that outsiders have been present and, in some cases, have played a very negative role. But I’ve been talking with protesters and trying to get a sense of who some of these folks are and I’ve heard mixed things. Some of the negative stuff has come from people in Minnesota and some of it has come from people on the outside. What I’d say is we’ve got enough to handle on our own and that what we really need to do is refocus on justice for Mr. Floyd. And the negative behavior, looting, arson, does not help us achieve that goal.”

Conservative broadcaster (and former NYPD officer) Dan Bongino was even more blunt: “This isn’t a protest anymore, this is a coup,” he said.

He added, “This is an organized internal coup by a small group of agitators acting as a domestic terror group. That’s a fact.”

No wonder that President Trump has now declared ANTIFA a terrorist organization.

Groups like this rip at the very fabric of our nation, and their goals are vastly different than the goals of the vast majority of Americans.

Let us then, work together for equality and justice. One day we can do that is by denouncing these violent riots. Then, we can refocus on the killing of George Floyd and the larger questions of equal treatment under the law.