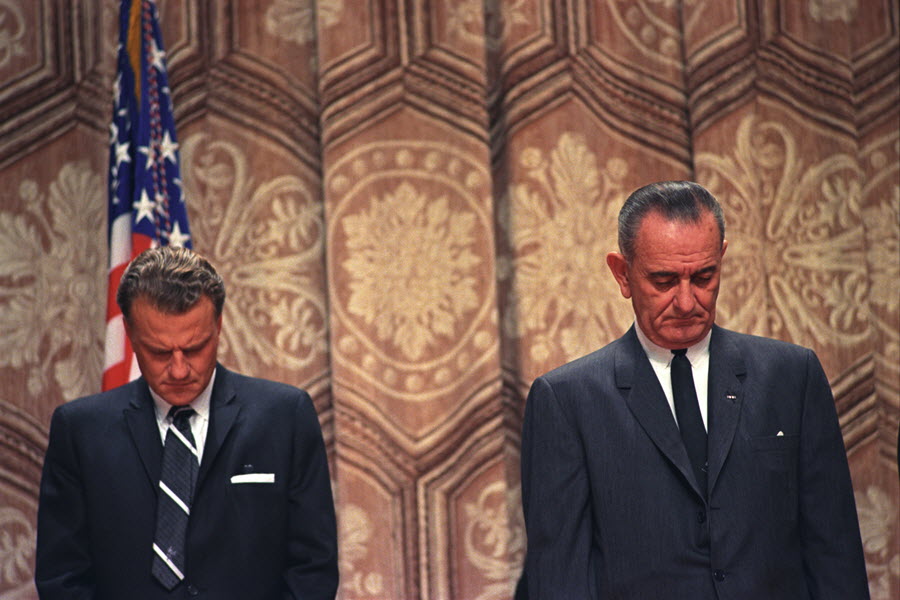 Under a new administration, many evangelical church leaders are starting to worry about the IRS overstepping its bounds. Secular activists are pushing Joe Biden to use the Johnson Amendment to silence pastors’ free speech. What is currently happening with the Johnson Amendment? What should we do to make sure ministry leaders’ First Amendment rights are protected?

Adopted in 1954 within the Internal Revenue Code, 501(c)3, the Johnson Amendment was a project of then-U.S. Senator Lyndon B. Johnson. He was reacting to attacks on liberal politicians like himself from the Facts Forum and the Committee for Constitutional Government.

The Johnson Amendment specified in the federal tax code that churches and affiliated groups were forbidden from participating or intervening in “any political campaign on behalf of (or in opposition to) any candidate for public office.” The price if they disobeyed? Their crucial tax-exempt status.

Church leaders have often argued that they can completely understand not using monetary resources from non-profits or churches for electioneering. But “in the ordinary course” of their ministry, they should be able to mention from the pulpit or to individuals the importance of voting for one person over another.

Before President Donald Trump took office, he met with a large group of Christian leaders in New York. He told them that he wanted to repeal the Johnson Amendment completely to give them back their First Amendment rights. As soon as he took office, he signed an executive order for the most part stopping its enforcement.

First Amendment advocates said at the time this was an important step in the right direction. But they still advocated the Amendment’s removal from the tax code.

White evangelical churches are for the most part the ones pushing to appeal the Amendment. But a study by the Pew Research Center in 2016 found that black Protestants are more likely to report having heard their clergy member directly endorse a candidate.

Technically, such uses of free speech were illegal, even if they went unpunished. First Amendment proponents say that this freedom should be extended to all clergy, period.

The State of Play Today

Speech advocates in Congress are still trying to get rid of this segment of the tax code, though it appears to need more steam to push the train up the hill.

On February 4, 2021, House Republican Whip Steve Scalise (R-LA), Congressman Jody Hice (R-GA), and Republican Conference Vice Chairman Mike Johnson (R-LA) reintroduced the Free Speech Fairness Act. The bill was introduced in the 114th Congress, passed the House during the 115th Congress, but ended without a path forward in the Senate.

Johnson said about the bill’s reintroduction:

The First Amendment does not end when a pastor stands behind a pulpit. I’m proud to offer the Free Speech Fairness Act with my good friends Whip Scalise and Rep. Hice to protect the rights of clergy, churches, and other non-profits from the threat of losing tax-exempt status as they live out their most basic American rights. I hope our Democrat colleagues will join our effort to pass this legislation and defend the freedom of speech in every venue.

As a pastor before coming to Washington, I was personally harassed by the IRS. My church’s tax-exempt status was threatened because I dared to preach openly on political issues important to my congregation. Our Founding Fathers left us unalienable rights to be enjoyed – and defended.”

Other members of Congress who have signed onto the bill include Rep. Vicky Hartzler, Rep. Jeff Duncan, Rep. Robert Aderholt and Rep. Michael Cloud.

Are Pastors Left Out from Constitutional Protections?

Senator James Lankford and Rep. Steve Scalise wrote an op-ed in 2019 in USA Today. They explained why the repeal of the Johnson Amendment was so important. They reminded readers that the First Amendment states, “Congress shall make no law…abridging the freedom of speech…”

In light of that, they wrote:

Why not allow business executives, college professors, tribal leaders, non-profit directors, and every other American to be treated the same? A business executive can write an email to his or her employees, telling them why they think a certain candidate should be supported or opposed, but a non-profit leader cannot send the same email. A college professor can say anything to his or her class about any politician, but Pastors, Imams, Priests, or Rabbis are prohibited in their official duties from speaking about the same politician.

It is not so much about churches and non-profits engaging in politics on a regular basis – most will not want to directly endorse candidates. (That’s a great way to lose church members, some report.) The repeal of the Johnson Amendment would give non-profit and church leaders back completely their First Amendment rights — not just in their personal lives outside of their organizations, but as the leaders of their organizations and in their pulpits.

An Unenforced Law with a Chilling Effect

The Johnson Amendment has mostly functioned as a distant but potent threat, discouraging free speech by pastors, despite being enforced only rarely and selectively. In 1992 the Church at Pierce Creek in Vestal, New York ran a full-page ad against the election of Bill Clinton which resulted in the loss of its tax-exempt status. Back in 1964, anti-communist evangelist Billy James Hargis and his Christian Crusade radio ministry had their tax exemption revoked.

Since 2008, the Alliance Defending Freedom has organized “Pulpit Freedom Sunday,” encouraging pastors to challenge the Amendment by giving explicitly political sermons in defiance of this unconstitutional law. As reported by the Washington Post, only one of more than 2,000 Christian clergy who has challenged the law in his pulpit has been audited since 2008, and none have been punished.

The Johnson Amendment is the textbook definition of a paper tiger. The fear of it causes churches and pastors to self-censor far more than enforcement ever would, which likely explains why it isn’t enforced. It is blatantly unconstitutional and should be repealed. In the meantime, pastors should preach and teach on whatever topic they chose secure in the knowledge that if the IRS ever sought to enforce the provision against them, First Liberty Institute would welcome the opportunity to challenge the law in court.

Since the takeover by the Biden Administration we have seen little change in enforcement of the Johnson Amendment. But left-wing secularists aren’t satisfied with that. A liberal activist group called Americans United for Separation of Church and State has asked the Biden/Harris administration to crack down. No sign of that on a large scale … yet.

The Price of Liberty Is Eternal Vigilance

My own organization, Christians Engaged, was denied non-profit status by the IRS for allegedly peddling politics. We don’t even endorse political parties or candidates, but the IRS wrote us to say that “[b]ible teachings are typically affiliated with the [Republican] party and candidates. This disqualifies you from exemption under IRC Section 501(c)(3).”

With the help of First Liberty, we appealed, and won our case within 21 days. This was a victory story for the Body of Christ everywhere in our nation. But why should pastors or churches be forced to endure such special scrutiny, compared to other Americans? Every church leader and non-profit leader in America that teaches the Bible needs to remain vigilant to protect our First Amendment rights. When we stand up — our republic works.

Free speech should not be only for the Woke corporate leaders of America. The pastors and spiritual leaders of America are in fact wide awake to what is happening to our nation. Their voices should be equally free. Let’s work with our Representatives to get this bad law off the books.

The Founders of America knew the importance of the clergy having a voice in our government. As Noah Webster wrote:

The learned clergy . . . had great influence in founding the first genuine republican governments ever formed and which, with all the faults and defects of the men and their laws, were the best republican governments on earth. At this moment, the people of this country are indebted chiefly to their institutions for the rights and privileges which are enjoyed.

Church leaders, don’t be afraid of the Johnson Amendment: Preach the truth and shame the devil.

Bunni Pounds is President of Christians Engaged. She is a lover of Jesus, former Congressional candidate, fifteen-year political consultant, and preacher of the gospel. Connect with her on Facebook @bunnipoundsTX, Twitter @bunnipounds, or Instagram @bunnipounds.