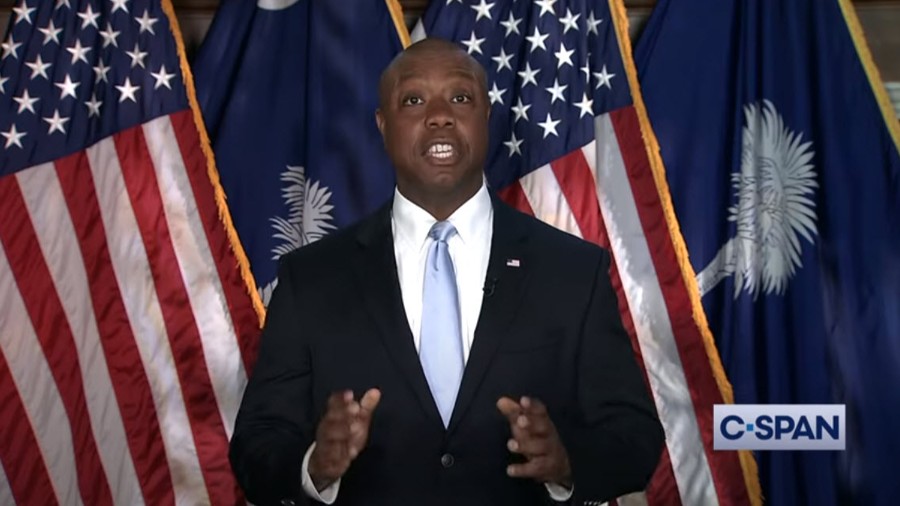 Last week, I asked why there was no uproar from LGBTQ activists when Bruce “Caitlyn” Jenner was “misgendered” and mocked by the left after announcing that he would run for governor of California. (In reality, some of the mocking came from LGBTQ activists, who painted Jenner as a fame-hungry reality TV star.) And where was the uproar when Bill Maher questioned the “born that way” dogma, stating, “Wasn’t always sure about the man-woman thing, but low capital gains taxes — born that way.”

To be sure, there were some scattered voices of protest, but not a fraction of what would have happened had the mockery been pointed towards someone like Richard “Rachel” Levine, President Biden’s appointee as assistant secretary for Health and Human Services.

But all that pales in comparison to some of the attacks on Sen. Tim Scott after he responded forcefully to Biden’s address to Congress on Wednesday night.

As Mollie Hemingway tweeted in response to the Twitter-supported “Uncle Tim” tweet, “Twitter is choosing to trend a racist attack from the left on Sen. Tim Scott, the black Republican senator from South Carolina.”

Others drew attention to a now-deleted tweet from Scott Nevins, which stated, “Sen @TimScottSC is Uncle Tom’ing it for his life. So sad. South Carolina should be ashamed.” (The twitter bio of Nevins reads in part, “TV Personality & Host | Political, Entertainment & LGBTQ News Contributor.”)

These openly racist, keep-a-black-man-in-his-place comments are nothing new from the left.

To his credit, Nevins apologized, tweeting, “Tonight I tried to do an ironic joke about Sen Tim Scott using the term ‘Uncle Tom’ in his rebuttal. While I was shocked by his lack of self awareness, I should not have used that term myself, even in reference. That was not right. I apologize.”

“Literally Attacking the Color of My Skin”

This, however, was only part of the attack against Scott, who responded, “Intolerance so often comes from the left with words like ‘Uncle Tim’ and the ‘n-word’ being used against me. And last night what was trending in social media was ‘Uncle Tim,’ and they doubled down on this concept of liberal oppression. It is stunning in 2021 that those who speak about ending discrimination want to end it by more discrimination.

“The left has doubled down that they are going to, not attack my policies, but they’re literally attacking the color of my skin.”

Talk about wanting to keep a black man in his place. Dare to cross the forbidden ideological line and side with the conservatives, and you have become the enemy, to the very color of your skin.

Talk about discrimination and control. Talk about overt racism.

Can You Imagine the Uproar If the Roles Were Reversed?

Could you imagine the uproar if, say, Sean Hannity or Tucker Carlson used a derogatory, color-related term to describe a liberal African American?

But these openly racist, keep-a-black-man-in-his-place comments are nothing new from the left.

Another of the Left’s Racial Slurs

In fact, also this week “Breakfast Club” host Rashawn “DJ Envy” Casey came under fire when he dared to defend the Ohio police officer who fatally shot black teenager Ma’Khia Bryant before she could stab another black teenage girl.

Said one critic on Twitter (herself a person of color), “yes, DJ Envy. you are, in fact, a coon. we’ve said this for years. thank you for finally getting with the program.”

Last year, Terry Crews was labelled a coon for posting tweets like this:

Are all white people bad?

Are all black people good?

Knowing this reality- I stand on my decision to unite with good people, no matter the race, creed or ideology.

Given the number of threats against this decision-

I also decide to die on this hill.

In response, Rick Ross said, “Terry Crews is another coon who was basically bought.” And it’s the Republicans and the conservatives who are the racists? Seriously?

Brando Simeo Starkey, writing for The Undefeated, stated, “Through peculiar public theatrics, Kanye West and Terry Crews transformed these trying months into the Summer of the Coon.”

And he concluded his article with this: “Yes, being called a coon tends to wound the spirit. But black folk must be allowed to protect themselves against members who sabotage the race’s wellbeing.”

In other words, you deserve the epithet, so own it. Nothing racist here!

Blindly Getting Away With Racism

But either way, it is clear that racial slurs are acceptable the moment an African American leaves the ideological plantation. (Candace Owens would be the latest, prominent example of this.) And yet everyday the left reminds us that, “Yes it’s clear the R in Republican stands for Racist.”

To be sure, I’m all for vigorous debate as to which party’s policies best help people of color. And I’m all for the left calling out blind spots on the right.

In this case, though, it’s time for the right to call out blind spots on the left — very ugly, despicable blind spots.

I would recommend, then, that those who call themselves liberals and pride themselves on tolerance take a good, long look in the mirror before accusing others of racism.

The most blatant, unvarnished, and unapologetic manifestations of that racism are not the sole domain of radical white supremacists. They are found in the hearts of many on the left as well, once that line is crossed.