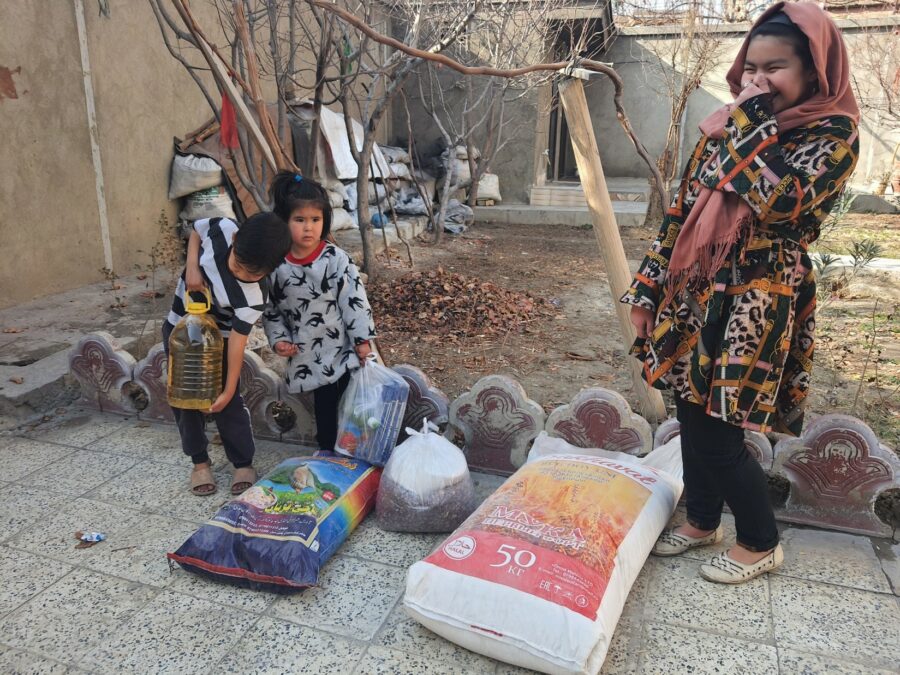 Afghan families take delivery of coal and other winter supplies provided by the Vulnerable People Project.

Like most Americans, I watched with shock and horror at the Biden regime’s reckless and criminally negligent withdrawal from Afghanistan. It sentenced the Afghan people to a horrible fate at the hands of the Taliban and their terrorist allies. Biden’s decisions also seriously hurt the United States’ reputation in the world with friend and foe alike.

Before the feckless withdrawal, it had been years since an American died in action in Afghanistan. The United States had ceased combat operations there in 2014, and was able to maintain leverage over a strategically crucial country while keeping a minimal troop presence. Our Afghan contingent was far smaller than those we keep in South Korea, Germany, Japan or even Djibouti.

But Joe Biden, with his vast and murky ties to Chinese Intel that our FBI won’t investigate, threw America’s leverage away in a matter of weeks. As I wrote here, among a litany of other outrages, Biden handed tens of billions of dollars in U.S. military equipment to a terrorist regime closely allied to Red China.

Abandoning Thousands of Americans and Christians

On a moral level, Biden did something far worse. He abandoned thousands of American citizens, Afghan allies of America, and Afghan Christians to a regime based on rape, torture, and terror. As a U.S. infantry veteran, this struck me with special horror. I know what happened to South Vietnamese who aided our old war effort, and I couldn’t believe that we were subjecting thousands more of our allies to such a fate.

Through my Vulnerable People Project, I’ve been trying to help these people get out of Afghanistan to neighboring countries and safety. My special focus has been Christians, since the Gospel went viral among the peoples of Afghanistan during the two decades of religious freedom we helped to guarantee there. Now all those people have targets on their backs.

Is Biden Kissing Up to the Taliban?

The Biden State Department hasn’t just refused to help. It actively frustrated our efforts and those of other private agents, such as Glenn Beck’s organization. You’d almost think that Biden was trying to win the goodwill of the Taliban by offering up as scapegoats the people we should be protecting.

While I still am involved in complex efforts to help Christians and other vulnerable Afghans escape, my organization is trying something simpler now. We want to help these targeted Afghans survive through the winter. To do that, they need something simple. They need coal. You and I might think of that as an old-fashioned fossil fuel, or something that Santa leaves in stockings for bad kids. But it’s something quite different in the icy mountains of Afghanistan. It’s the difference between life and death.

Aiding me in this effort is an extraordinary man named Prince Wafa. No, he’s not Afghan royalty. He’s an American citizen and former translator for the U.S. military. He escaped Afghanistan just a few weeks ago. But he’s looking back at all those left behind and trying to save them too. Wafa told reporters:

This situation is urgent. Parents are selling their children for food and are desperate for basic survival needs. I understand because I was trapped in Afghanistan. During my crisis, a friend of mine in the United States saw Jason Jones appear on a news segment on EWTN News Nightly. Jason’s organization was our last hope.

VPP and my local congressman, Rep. Darrell Issa, were there for me when my wife and I were vulnerable. Now that I’m free, it’s imperative that we save others. So I have to pay it forward. The power of one news story helped me get the right connections, cell phones, and money so that my life and my family’s life would be saved. I want to do the same by driving awareness to this urgent need for resources.

With Wafa’s help, the Vulnerable People’s Project was able to get coal, food, firewood, and other urgent winter essentials to some 1,600 Afghan Christians and other vulnerable minorities. Our work isn’t finished by a long shot, however. It’s a long winter over there, and the country is still run by terrorists.

It’s my prayer that American citizens realize the deep responsibilities that come with vast national power. President Trump understood that, which is why he did not enact a sudden, reckless pullout from Afghanistan. Joe Biden — or the secret committee that actually governs in his name — severely damaged American interests and soiled our national honor with the cut and run abandonment of that country. It’s just one of dozens of un-American policies and decisions that have lashed America since a controversial and still contested election.

One way we can push back against what team Biden is doing to our country and our world is to mitigate the damage. The Vulnerable People Project is my way of doing that. Afghan Christians shouldn’t have to die for the sake of Joe Biden’s Presidential participation trophy.