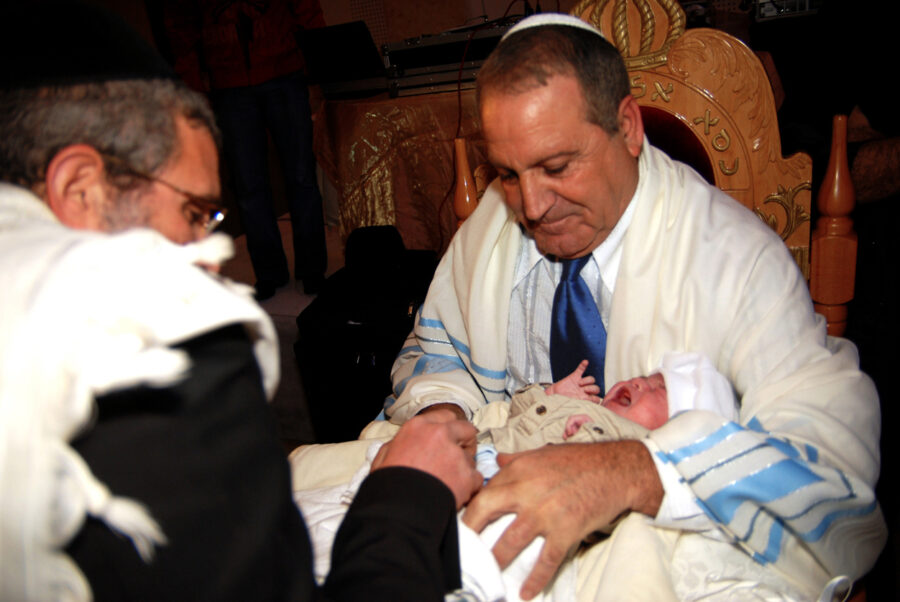 The unexpected origins of schmucks like the RINOs in Congress: by-products of a religious ritual!

Why are so many highly-qualified, intelligent people who share our basic principles and reject the left’s insanity so … useless? I don’t mean “useless” like stuff in your storage unit that you can’t bear to throw away. Some of that might theoretically come in handy, should your situation change. I have a large unit full of Moroccan furniture costing me hundreds of dollars to store every month, which I’m certain I’ll never use. But in theory, it could prove useful — to someone if not to me. So I can’t bring myself to toss it.

No, I mean useless in a much more profound, almost metaphysical sense. There is no English word that quite conveys what I mean here, so I must reach into Yiddish. The expletive “Schmuck!” gets yelled at people who are proving themselves useless, annoying, obstructive. It originally referred to the piece of discarded flesh left over from circumcision — something which you can see why pious Jews would regard as the quintessential waste product. It’s the piece of a boy that marked him off as not being one of God’s people, which God Himself commanded his parents remove.

William Barr: Teats on a Bull

It’s in that sense that we say, with Stream contributor Mark Judge, that former attorney general William Barr is “useless.” With the supreme power of law enforcement in America, convinced that the left is a “totalitarian threat,” he did … absolutely nothing about it. He didn’t clean out the DOJ, didn’t unearth why the FBI was hiding Hunter Biden’s laptop, didn’t find a way to stop the George Floyd rioters from trashing America’s cities. He proved exactly as useful in office as an inflatable love doll, stuffed into a suit, and interviewed for hours by a fascinated Sean Hannity.

Today, Barr actually helps the left, giving credibility to their wild charges against former President Trump — in return for what? For five extra minutes of temporary relevance in the minds of people who despise him, whom he considers “totalitarian threats.”

The Stuffed RINOs Among Us

That’s the sense in which the Republican establishment is useless. And National Review. And virtually every conservative who writes for the Wall Street Journal. They’re firemen faced with an orphanage or packed church that’s engulfed in a raging fire, who will gladly lend a hand by … texting the people inside helpful tips on fire prevention. They might even go to a conference on the importance of better pain management for burn victims, if it’s taking place in a city with cool microbreweries.

You know exactly the kind of person I’m talking about. It’s not just the David Frenches and Rod Drehers and Russell Moores of this world, who give aid and comfort to our enemies by savaging our friends. It’s the dross, the dreck, the mewling and toothless dead weight of most Republicans in Congress, and most of the candidates we’re offered in GOP primaries.

Even if they’re not actively stabbing us in the back, they are cringing and wincing and rolling their eyes in scorn at anyone who’s actually trying to make a difference, such as Steve Bannon, or Marjorie Taylor-Greene. They’re French troops waving the white flag in May 1940, and laughing at the “hotheads” who insist with Charles de Gaulle that the fight isn’t over. They’re soldiers sunk in defeatism, already calculating how much they can get on the black market for their rifles.

Why They Won’t Fight

What makes people like this? It’s not accurate to call them “crypto-leftists.” Or even to say that they “lack all conviction/while the worst are full of passionate intensity.” That would actually mitigate their guilt, if just a little. Instead we must study the engorged, torpid forms of the lumbering herds of the Useless in light of what we know of the human heart.

What motivates most people, most of the time, if they aren’t vigilant and careful? The desire to fit in perfectly with their peers. Not to stand out, not to look silly, not to find themselves singled out in any way, especially not an embarrassing one that might lower their status.

I can understand this impulse, if only from the outside. In fact, I feel a duty to be compassionate towards those who are “subject to peer pressure” or “capable of embarrassment,” since I’ve never experienced either emotion.

Sheep, Intellectuals, and Other Herd Animals

But I know they are commonplace, standard issue equipment on most human beings. Like birds that instinctively keep their place in a flock that makes a sudden turn in the sky, or sheep trotting along to either the shearing or the slaughter, most people are default conformists. Even and maybe especially those who consider themselves “intellectuals” and “leaders.” Such people’s bread and butter is the esteem and support of their colleagues. (That new book is not going to blurb or review itself!)

And what is almost guaranteed to mark someone out from the warm, cozy herd of his peers? To subject him to possible ridicule, status-loss, or even ostracism? If he says or does something “extreme.” This doesn’t just cover taking outlandish or fringe positions on hot-button issues. No, the impulse to avoid extremes at any cost goes much, much deeper. It extends its censorship into the conformist’s own senses and intellect.

Is It Okay to Notice They’re Shooting at Us? No? Okay!

So even when a situation in the outside world that directly affects the conformist becomes extreme, he cannot admit it — unless he’s sure his peers will immediately agree. If active, deadly extremists begin to attack the herd from outside, the conformist will look to his left and right, to see if it’s okay to treat the threat as real. If he doesn’t get feedback which says it’s okay to notice the extreme threat that everyone faces, then he tells himself it’s “not so bad,” that the few who are moving to defend the herd are “alarmists” and “conspiracy theorists.” That is … extremists.

I’m certain that the demon-driven ideologues of the left who control our Oligarchy (Just listen to that extremist rhetoric he’s using!) understand this human tendency and know how to exploit it. You want to know what made you sound like an extremist over the past few years? Noticing and pointing out any of the following phenomena:

But if you notice any of this and point it out, you sound … extreme. You’re talking about extreme things, in an emotional tone, warning of abuses that sound extremely bad, whose implications would be extremely alarming if true. All that of that makes the sheep who wants to trot straight ahead and follow the tail in front of it … feel extremely nervous. But he wants to feel calm. So when the Oligarchy sends its little dog to nip at the haunch of some “extremist” who’s getting out of line … the conformist is grateful.

He doesn’t want to know if he’s headed to the slaughterhouse, and will end up on a plate with some sprigs of rosemary. He wants to bleat in harmony with the rest of the happy flock.