William Barr: Whose Side Are You On? 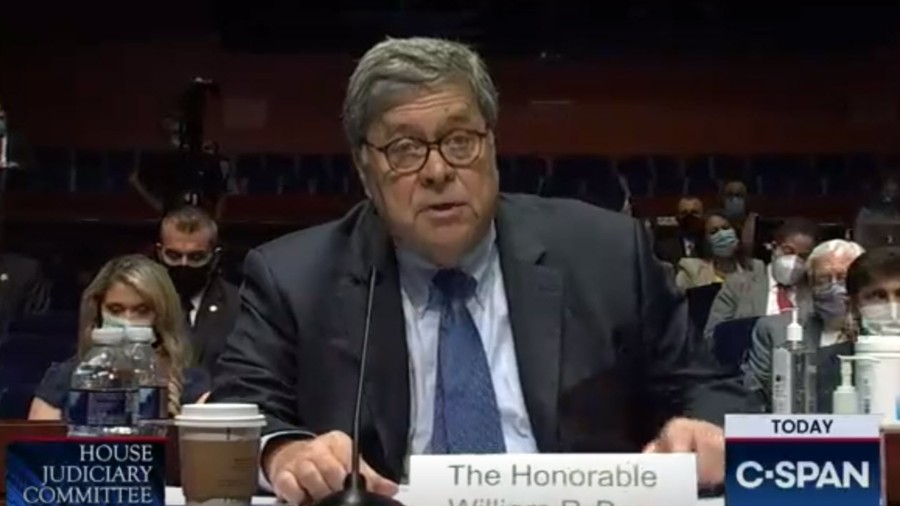 William Barr has to make up his mind. He has to decide if the left is a totalitarian threat to the country or it’s not.

As it stands now, Barr is always coming down on both sides. Barr, who served as attorney general under Donald Trump claims in his memoir One Damn Thing After Another that by the end of his term the president had “lost his grip” and become “manic and unreasonable” and “off the rails,” as well as heeding the advice of “whack jobs.”

Then on Fox News, Barr suggested the Department of Justice (DOJ) likely has a case that President Trump improperly took classified documents from the White House when he left office amid an ongoing investigation into the matter. “Is there any legitimate reason for those materials to be in the former president’s possession?” Barr was asked by Fox News anchor John Roberts during an appearance on the network Friday. Barr: “No. I can’t think of a legitimate reason why they should have been taken out of the government, away from the government, if they are classified.” (This doesn’t address Trump’s claim that he simply declassified them first.)

Sticking Up for the Deep State

This follows Barr criticizing “the Right.” Journalist Bari Weiss recent asked Barr a strong question: ”So what do you say to conservatives who say, ‘Why should we possibly trust these institutions to prosecute people — let’s say who protested on January 6th or agents of the state going after a president they so obviously despise? Why should we trust them anymore?'” Weiss asked, adding “You still give them the benefit of the doubt, but many other people in your party don’t.”

Well, what’s the alternative? You know, something I’m pretty tired of from the Right is the constant pandering to outrage and people’s frustrations. And picking and picking and picking at that sore without trying to channel those feelings in a constructive direction. In my opinion, Ronald Reagan was a great populist not because he followed, you know, the frustrated instincts and the outrage of the people that many people who supported him but because he channeled it and was constructive about it.

Yet I have heard, over and over, constructive ideas from conservatives about dealing with a corrupt Department of Justice and FBI. For starters, begin firing and arresting agents who broke the law, entrapped innocent people at protests, or doctored warrants to try and get Trump. A large part of conservative frustration is that the FBI seems to get away with things that normal people would be sent to jail for.

Ironically, in his book Barr himself seems fully cognizant of the corruption in America’s law enforcement institutions, and how drastic steps might beed to be taken to clean house. The attorney general also argues that the source of much of America’s problems on the left wing of the Democratic party, which has become totalitarian. “Some liberal and progressive commentators suggested that our polarizing politics was somehow the consequence of an upsurge in right-wing extremism,” Mr. Barr writes, “but no sentient person could take that seriously.” Does that include the attorney general himself?

Mr. Barr observes that “Liberal democratic ideals — strict limits on governmental power, individual rights, press freedom religious liberty — were framed within the great Anglo-American tradition and are the life’s blood of our Republic.” Mr. Barr offers that this tradition was “painstakingly wrought over many centuries from a rich amalgamation of influences,” among them classical philosophy, Christian precepts, “Anglo-Saxon folkways,” the Enlightenment, the American Revolution, and the common law.

“Under liberal democracy,” he writes, “it is not the role of the state to use its coercive power to remake man and society according to some abstract conception of perfection.”

He Sees the Problem, and … Shrugs

The modern left, Barr concludes, has an “incipient totalitarian style” that is “poisoning America’s political life.” The left has adopted “the same kind of revolutionary and totalitarian ideas that propelled the French Revolution, the Communists of the Russian Revolution. and the Fascists of twentieth-century Europe.” In sum: “Radical progressivism’s core idea is that there is a preordained scheme of natural earthly perfection toward which man and society must be led inexorably by the march of history.”

There’s more. Barr recalls that what convinced him to return as attorney general under President Trump was the politicization of governmental agencies: “the suspect Russian collision narrative had drawn the Department of Justice and the FBI into the political maelstrom, and many Americans sensed — with some justification — that powerful Washington politicians were using the criminal justice system as a political weapon.” Mr. Barr calls the charge that the Russia helped President Trump get elected in 2016 bogus, citing “mendacious and fraudulent attempts to invalidate the legitimate election of an American President.”

A Loyal Son of the Establishment

Because he had no intention of serving again after President Trump, Mr. Barr felt he could be an independent authority without an agenda. He also thinks President Trump could have won in 2020 with “a minor adjustment in his behavior.” Looking at election maps, he concludes that President Trump lost suburban voters who may have been put off by his abrasive style.

Mr. Barr served as attorney general under presidents Donald Trump and George Herbert Walker Bush. One Damn Thing After Another also recounts his childhood in New York City. Mr. Barr’s parents were professors at Columbia University, and the family lived on the Upper West Side. Mr. Barr worked for the CIA before going to the Department of Justice in 1989. He became attorney general in 1991 and served until 1993, then returned in 2019 to serve for a year in the Trump administration.

In his book Mr. Barr quips that while he is not the only attorney general to serve twice (the other was John J. Crittenden), he is the only one to serve “in two different centuries.”

In both of those centuries, America was threatened from within by totalitarian ideologies. Barr seems to understand that threat but at the same time lacks the fight to do anything about it.