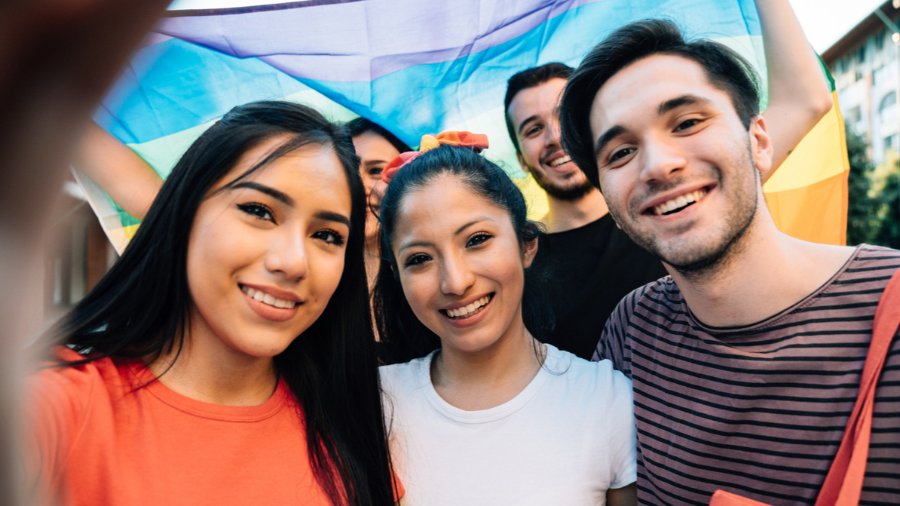 One of the early gay activist talking points was that 1 in 10 people were gay, even though the activists knew this was not true. That’s why it was significant when, in 2011, demographer Gary Gates, himself gay, “released a review of population-based surveys on the topic, estimating that 3.5% of adults in the United States identify as lesbian, gay, or bisexual, with bisexuals making up a slight majority of that figure.”

Other surveys came to similar conclusions, and even as recently as 2017, a Gallup poll put the total percentage of Americans who identify as LGBT at 4.5%. The newest Gallup poll, however, puts that number at 5.6%.

More strikingly, the poll indicates that 1 out of every 6 generation Z adults (meaning over 16% of those aged 18-23) identifies as LGBT. How can this be?

More than half of LGBT adults (54.6%) identify as bisexual. About a quarter (24.5%) say they are gay, with 11.7% identifying as lesbian and 11.3% as transgender. An additional 3.3% volunteer another non-heterosexual preference or term to describe their sexual orientation, such as queer or same-gender-loving. …

Rebasing these percentages to represent their share of the U.S. adult population finds 3.1% of Americans identifying as bisexual, 1.4% as gay, 0.7% as lesbian and 0.6% as transgender.

So, looking at this evidence, it would appear that, outside of 18-23 year-olds, there is no major change in the overall population that identifies as LGBT. Why, then, such a dramatic shift among these young adults?

There are two likely explanations.

One is that, in the past, a large percentage of those who felt that they were LGBT hid their identities. Now, they feel freer to be out and proud.

The second possibility is that they are being influenced by the society around them, and so they perceive themselves to be gay or lesbian or bisexual or transgender at a much higher rate. This would suggest that LGBT identity is not simply inborn and innate. It can simply be a matter of perception.

Which explanation is correct?

It is certainly possible that more young people are feeling free to self-identify as LGBT. But it is hard to explain why there is such a dramatic spike in a private, anonymous poll.

Not only so, but in different communities in America and around the world where there has been tremendous acceptance of LGBT identity, the percentages of those who have identified as such over the years has remained fairly steady.

That’s why this explanation, namely, that society is more open, does not seem adequate in explaining the significant jump in LGBT identification among 18 to 23-year-olds.

Instead, this spike should be seen as the result of the constant, pro-LGBT bombardment of children, beginning with the school system literally brainwashing children from their earliest days regarding LGBT identity. Put another way, do you really think that kids who were exposed to drag queens when they were toddlers might not be more inclined to wonder if they themselves might want to be drag queens too?

What Led Americans to Vastly Overestimate the Percentage of Gay and Lesbians in America?

As for the impact of gay-themed propaganda on America, classically articulated by two gay sociologists in After the Ball (published in 1990), already in 2002, Gallup found that “Americans estimated that 21% of men were gay and that 22% of women were lesbian.” By 2011, “U.S. adults, on average, estimate that 25% of Americans are gay or lesbian.”

Among those 18-29, the estimate was put at 29.9%, meaning, that this age group thought that almost 1 in 3 Americans were gay or lesbian. And where, pray tell, did they get such an idea?

Perhaps the disproportionate representation of (and celebration of) LGBT characters on TV and Hollywood and comic books, not to mention the talking points in children’s schools, contributed to this misperception?

About four years ago, at a Christian apologetics conference, I surveyed a group of highly motivated high-school students, asking them what percentage of Americans they thought were gay or lesbian. On average, they put the number at 30% or more. Where do you think they came up with that number?

Back in 2001 — yes, 2001 — Michael Medved rightly noted, “A Martian gathering evidence about American society, simply by monitoring our television, would certainly assume that there were more gay people in America than there are evangelical Christians” (whereas evangelical Christians numbered, at that time, at least 20-30% of the population).

In the current Gallup poll, the significant percentage of LGBT adults identifying as bisexual (54.6%) is quite striking, massively higher than the “slight majority” that Gates found in 2011. In other words, they are not identifying as exclusively gay or lesbian. Rather, they are expressing potential attraction to both sexes.

But this, too, is not surprising, given the bombardment of bisexual images and relationships that they have been exposed to much of their lives, not to mention the influence of pornography, where gender boundaries are often blurred. After all, today, almost anything goes. Or will anyone dare claim that, suddenly, all these people who were “born bi” are coming out of the closet?

When it comes to transgender identity, just think of growing up with heroes like “Chaz” Bono and “Caitlyn” Jenner and Jazz Jennings, among many others. How might this affect your own self-perception?

Today, there is an increasing body of evidence that teenagers, especially female, are more prone to identify as transgender in a mistaken effort to get to the root of some of their own emotional and psychological issues.

We are a group of parents whose children have suddenly—seemingly out of the blue—decided they identify strongly with the opposite sex and are at various stages in transitioning. This is a new phenomenon that has only recently been identified. Researchers are calling it Rapid-Onset Gender Dysphoria (ROGD), and it is epidemic among our most vulnerable youth.

Our children are young, naïve and impressionable, many of them are experiencing emotional or social difficulties. They are strongly influenced by their peers and by the media, who are promoting the transgender lifestyle as popular, desirable and the solution to all of their problems. And they are being misled by authority figures, such as teachers, doctors and counselors, who rush to “affirm’ their chosen gender without ever questioning why.

Looking at some of the scientific data, a March 3, 2020 article from the UK’s Prospect Magazine noted, “Transsexuality is a talking point like never before, and a glance at the figures sheds some light on why. The number of children, in particular, being referred to the Tavistock and Portman Foundation Trust’s gender identity development service (Gids)—the NHS service through which all UK candidates for a sex change under 18 are funnelled—is up from 77 in 2009 to 2,590 in 2018-9.”

Thus, “alarm bells have begun to ring among a handful of psychiatric professionals about the number of teenage girls arriving at the Tavistock’s door and the nature of their treatment.”

This has now led to lawsuits against Tavistock, along with major reevaluations in the UK. Serious questions are being asked, and rightly so.

Realizing the Deception Raging in Our Culture Should Give Us Compassion

Abigail Shrier has documented this at length in her book Irreparable Harm (a book that Amazon will not allow the publisher to advertise on their site, although they still sell the book). Ryan Anderson has addressed it as well in his book When Harry Became Sally (a book that Amazon has now banned).

So, it is no surprise that more young adults are identifying as transgender, along with gay, lesbian and bisexual. Not only so, but I could almost guarantee, based on stories and studies I have followed in years past, that a decade from now, many of these same people will no longer identify as gay or lesbian or bisexual or transgender.

When we also recognize the “cool” factor, meaning, that it’s often considered trendy and cool today to identify as something beyond (or different than) heterosexual, Gallup’s latest poll is not surprising in the least.

All the more, then, do we need to hold fast to solid, biblically-based, sexual and family values, also showing greater compassion to those whom the culture has so strongly (and wrongly) influenced.