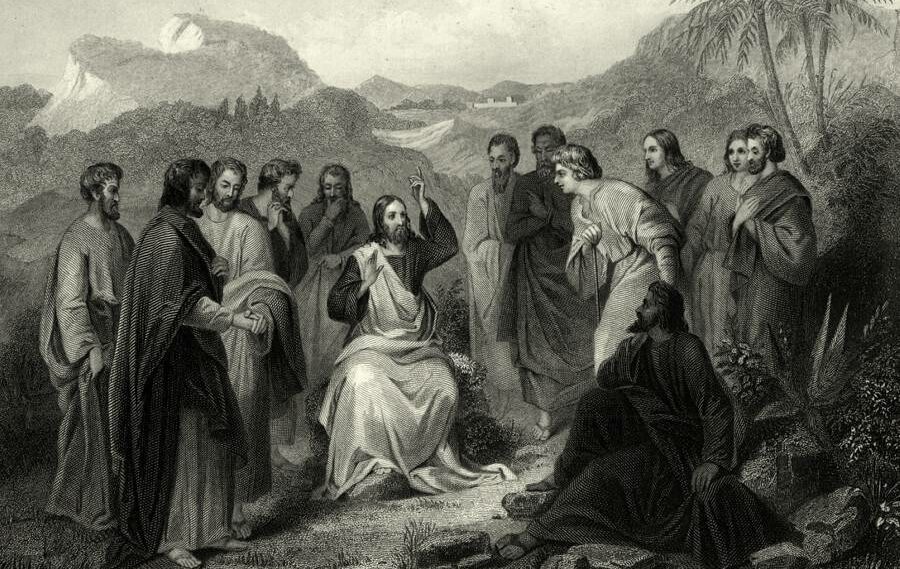 The famous rabbi had a knack for asking questions that sounded easy but turned out to be killer. “Who do you say that I am?” The answers his contemporaries gave tell us more about them than they do about him:

The book containing the stories of Jesus’ life has been our planet’s best-seller for some two thousand years, read by more people, translated into more languages, burned by more tyrants, banned by more culture warriors, than any other, ever.

Yet while most everyone agrees what sort of man Confucius or Alexander the Great was, to this day, no consensus has emerged even among the “experts” about the teacher from Nazareth. Answers still often define the respondent better than the questioner:

What is an ordinary reader to think, in the face of so many authoritative and confident answers to so simple a question? Finding the “historical Jesus” shouldn’t be so hard. In some ways, the amount and quality of evidence for his life is far better than for Confucius or even Alexander the Great.

We Know So Much More Than That

Four of Jesus’ followers wrote biographies within a few decades of his passing. His students would have been younger than he, probably in their early 20s or teens when he died. (You don’t go gallivanting around Palestine years at a time if you have a business and five kids to feed, still less suffer from arthritis.) That means many would have been alive when the Gospels were written.

Hundreds of facts mentioned in Luke’s Acts of the Apostles have been confirmed from other sources. Even the names of figures in the gospels turn out to precisely match the frequency of the same names from tombs in 1st Century Palestine — disproving Bart Ehrman’s Telephone Tag theory of the origin of the gospels.

Ehrman thinks the stories were passed down many generations and across cultures. But toss a few foreign names into a game of Telephone Tag — as I have done many times when I’ve spoken on the historical Jesus — and see how quickly those names get garbled. And Jesus’ words and actions were so distinctive, even shocking, they would have burnt into the consciousness like a branding iron, or a meteor striking earth.

“No man has spoken like this man,” said those who first heard his words.

So why is it that 2,000 years later, answers to Jesus’ query multiply not like rabbits, which resemble one another, but more like aliens in the bar on Tatooine?

Jesus himself warned, “For judgment I have come into the world, so that those who are blind may see, and those who see will become blind.”

Recently, a philosopher, a columnist, and an historian of religion walked into a podcast. (My new Wind of the Tao podcast, where you can hear some of the most original thinkers on religion. You are welcome to follow!)

All three of us have long been fascinated by the figure of Jesus in the gospels, though we have used different instruments to study those portraits.

The philosopher was Lydia McGrew, author, most recently, of The Eye of the Beholder: The Gospel of John as Historical Reportage. Lydia said, to paraphrase a little,

I have been studying how we know things, and what claims can be believed, for many years. Reading the gospels, I find evidence for truthfulness that many scholars overlook. These works give the appearance of casual truthfulness. The stories they tell fit together in fine ways that no one could have planned. And even incidental details are often confirmed by outside evidence as well. Here I find subtle yet powerful evidence that the life they record is genuine.

The columnist was Tom Gilson, author of Too Good to be False: How Jesus’ Incomparable Character Reveals His Reality. Tom noted:

One thing I notice in studying the gospels is what is not in them. Their hero never uses his extraordinary power for himself, as every other great leader has done, even religious leaders do. And while he speaks for God, he never says, ‘Thus says the Lord,’ a phrase the prophets used hundreds times in the Old Testament. Instead, he speaks with shocking personal authority: ‘But I say to you.’

The sheer goodness of this man astounds me. I find his like nowhere else, neither in fiction nor in biography. Yet the goodness of Jesus is startlingly authoritative: “You are my friends if you obey my commands.”

I am an historian of religions, author of Jesus is No Myth: The Fingerprints of God on the Gospels. I have studied founders of faiths in China, India, Tibet, Japan, ancient Sumer, Greece, the European Middle Ages, and modern America. Neither have I found anyone remotely like Jesus of Nazareth. Yet I find that the Gospels carry dozens of traits, like fingerprints, or DNA, which mark them as historically-credible documents.

One might compare ordinary, sincere readers of the gospels to Mowgli, the boy raised by wolves, untutored in formal biology, but who recognizes Hathi the Elephant when he sees him. If Mowgli learns to use a microscope and studies Hathi’s DNA, and he will learn, as Lydia put it, to “make common sense rigorous,” to explain in more detail what makes an elephant an elephant.

Education itself is no barrier to recognizing Jesus, and can aid it. But indoctrination in an ideology can blind one to facets of the truth that conflict with one’s creed. Credentialed skeptics may thus become like the blind men who touch different parts of the elephant, and think they are in contact with a boa, a marble column, or a tree trunk.

Skeptics Who Do Seekers a Favor

Yet the seeing-but-blind skeptics do a favor for those of us trying to answer Jesus’ question. They ransack the ancient world for parallels to Jesus. Then they loudly publicize the figures they think look most like him: Apollonius of Tyana, Romulus, Buddha, the Sumerian goddess Inanna, the New Age “Jesus” in the “Gospel of Thomas.” By promoting these lame analogies, they demonstrate that in fact, no one like Jesus has ever walked the Earth.

Read the original accounts of such alleged alternative Jesuses Some are as amusing as the original Saturday Night Live could be. The Life of Apollonius of Tyana is the most popular, cited by the Jesus Seminar, Elaine Pagels, Bart Ehrman, and mythicists alike.

In Jesus is No Myth, I placed one of its hammy dialogues into the mouths of Steve Martin and Bill Murray, where it fits perfectly. Most people need only read a few lines of these “parallels” to get the joke. It takes Mr. Magoo-level visual impairment, plus the distorting lens of some ideology, to mistake these mice for that elephant.

In offering such absurd analogies, well-read skeptics help us answer Jesus’ question. They provide “control specimens,” as scientists call them. They show us what fake Messiahs look like. Jesus may share attributes with them: He speaks for God, as prophets do; for the marginalized, like the greatest social reformers; He died to redeem the world, as some say of the Holy Man in Lao Zi’s Dao Dejing, or Prajapati in the Rig Veda. But while Jesus opens all such boxes – as the Master Key – he is not defined by any of them. He is infinitely more.

By coincidence, the three of us, plus Brad Cooper, the former pastor who hosted our conversation, had known one another for years. If anyone remembers us a century from now, they will no doubt assume we got together in advance, to work out our complementary approaches to answering Jesus’ question. In fact, the mutual influence was minimal. We found similar things because the gospels ring true when tested in different ways, just as a man’s identify can be confirmed by voice, fingerprints, retinal scan, actions, patterns of speech, DNA, a friend’s casual glance, or by checking his driver’s license.

Psychologist M. Scott Peck was a life-long student of human nature, sometimes arrogantly confident in his ability to size people up. But towards the end of his career, he admitted that figuring Jesus out was above his pay grade: “Jesus, too, was wise, but he was also weird. I do not know how to explain him in purely human terms.”

C. S. Lewis, one of the greatest literary scholars of our time, also found himself out of his league, when confronted with the man of Galilee: “I have been reading poems, romances, vision-literature, legend, myth, all my life. I know what they are like. I know that not one of them is like this.”

We were introduced on the podcast as “experts.” But I suspect that even after Mowgli has gotten his degree in genetics at the Indian Institute for Forest Management, when he returns to the jungle and catches sight of the elephant, he will feel like a child again. That first impression on reading the Gospels was startling, yet strangely coherent. Later, we used our little microscopes and gene sequencers to answer our teacher’s question in more detail, “making common sense rigorous.”

But Jesus also warned, “Truly I tell you, unless you change and become like little children, you will never enter the kingdom of heaven.” Our wonder, on opening the gospels and meeting Him, only grows.