When Sting Put on the Ring: More Wisdom From a Holy Pastor 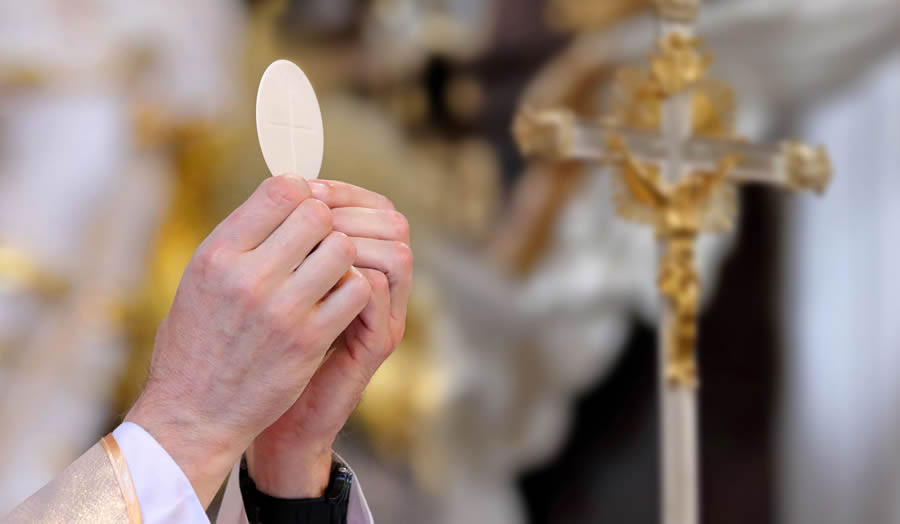 Last year I wrote in the Stream about Father Greg Hartley. Father Hartley had been one of my teachers at Georgetown Prep in Maryland in the early 1980s. As I wrote, he was “a remarkable mix of deeply faithful Catholic mystic, classical liberal advocating the true meaning of social justice (everyone treated as child of God), and rock and roll rebel.” He was thin, in shape, and had a face that somewhat resembled Albert Camus. One of his nicknames was “Screwtape,” because in his religion class he taught The Screwtape Letters by C.S. Lewis.

The reason for my tribute to Father Hartley was I had found, after many years, a letter that he had written to me. I had asked him what a person says to Jesus after receiving the Eucharist. It is a remarkable letter and one of my prized possessions, combining sound theology with the love of Jesus and the lyrics of one of our favorite bands, the Moody Blues.

Well, Father Hartley is back for another round. I recently found yet another missive from the good priest. (He and I wrote frequently in the summer in the days before the Internet.) This one is from the summer of 1983. I was heavily into the band The Police and their leader Sting, whom I considered a brilliant intellectual. A cassette of Police’s album Synchronicity was my constant companion that summer, and I was increasingly rejecting Christianity as I embraced the teachings of Sting. I read all the thinkers referenced on Synchronicity: Carl Jung, Paul Bowles (whose depressing existential novel The Sheltering Sky inspired Sting’s “Tea in the Sahara”), and the environmental nuts who Sting promoted, who even then were preaching climate apocalypse.

Then I made the mistake of stepping to Father Hartley. I wrote him, boasting of my newfound wisdom learned at the feet of the Police, and added a sarcastic question: Was Fr. Hartley still going to Mass? The implication was clear: the Eucharist was for morons and losers. It wasn’t cool. I mentioned that I saw the film Gandhi, which Fr. Hartley had strongly recommended, and was impressed by the Indian leader’s courage and activism. I closed with some words about The Lord of the Rings, the Tolkien masterpiece that both myself and Father Hartley adored.

A few weeks later, I got a response. The envelope reveled it was from THE JESUIT COMMUNITY AT GEORGETOWN, so I knew it was from my friend. I recently rediscovered the letter, in a box not far from the place where I found the letter I wrote about for the Stream last year. This new letter was a response to my taunts, my loss of faith, and my newfound god, Sting. It deserves a full reading.

A Source of Strength More Surprising Than Any Other

I watched the “Synchronicity” concert on HBO the other night. I’m sorry to have to tell you that I was disappointed in Sting, though I thought the other two guys in the band were outstanding. I am afraid that your hero was a bit burnt out, perhaps from the bizarre lifestyle that superstars can get into. Especially when they are touring. Sting looked bloated and acted sloppy. It seemed to me that for the most part he was not interested enough in his songs to try and do them with all his attention. I wonder if Sting hasn’t been slipping on the Ring lately — and you know what happens to those who try to use the Ring.

Just before sitting down to write you I listened to a few numbers from the tape you made — songs like Don McLean’s “Crossroads” and George Harrison’s “Beware of Darkness” — and they sent me on a train of thought — about pain. It just so happens that one of the songs Sting did well was “King of Pain.” Then there’s the piece by Don McLean — “Can you find my pain? Can you heal it?” What is this pain they are talking about, Mark? Do you know? I know a little bit about my own, and I know that everyone has it — but I know that each person’s pain is as personal as their name. And I know that it’s worse to try and cover it and hide from it than accept it.

I was very happy that you saw the movie Gandhi, and even happier that you were impressed by it. Gandhi could live as he did because deep down he had accepted the pain without protest. And he could do so because he found a Life strong enough to absorb the pain without needing to resist — and being able to live that way is what I call salvation. In case you’re wondering, I am driving at something. It’s the Eucharist.

I was fascinated that you asked me if I was still going to Mass — and because of that I can’t help mentioning it in connection with these other things. How do you think Gandhi could ever walk around the way he did and see people as he saw them and treat them as he did? For myself I am sure it was not simply because he was a very strong individual with great moral character. I am sure that is was because he was in touch with God. Like Jesus, it wasn’t just at his death that he offered the sacrifice of his life.

That is the way he lived, and the way we are called to live — not necessarily on the heroic scale of Gandhi, but in the way we treat ordinary people. To live that way is to offer a sacrifice to God. It is what the mass calls being a “living sacrifice of praise.” The very action of living and dying that way is what is celebrated in the Eucharist — and if you know that and look quietly and with respect into the celebration itself, you may find there a source of strength more surprising that anything you’ve experienced.

My experience is that it grows on you gradually. If you accuse me of preaching I can answer that you asked for it … .

Blessed by the Rebuke

That’s called being taken to school. What a blessing that the Lord has brought Father Hartley back to me in these letters.

Oh, and for the record, Synchronicity still holds up as a great record, although my favorite songs on it have changed. I now prefer “Miss Gradenko” which mocks life inside a cruel and lifeless totalitarian state. Dealing with the Stasi in your personal life will do that to you.