When 100 Percent of the Democrats Vote Against Amy Coney Barrett

For the first time in at least 150 years, a Supreme Court justice is confirmed with no support from the minority party, the AP reports. 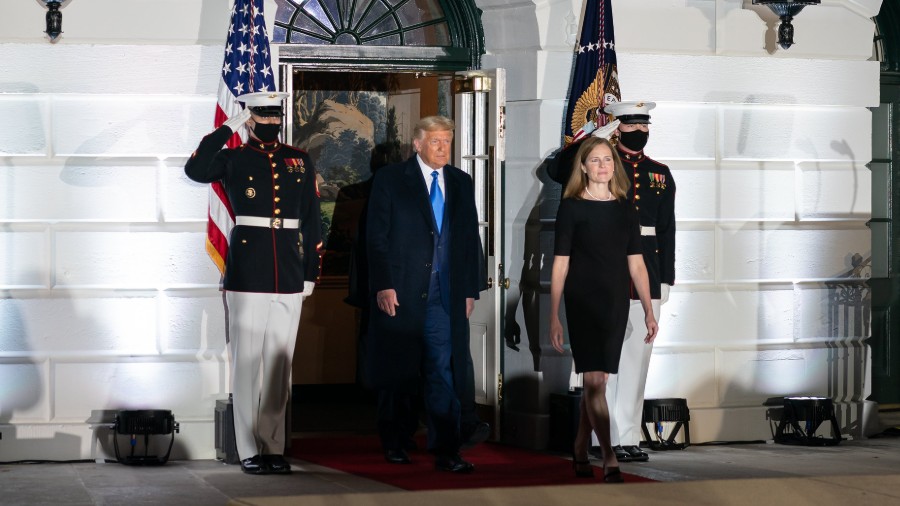 What should we think when every single Democrat voted against the Supreme Court nomination of Amy Coney Barrett? What does this say about their convictions and ideology?

There were actually three Democrats who voted to confirm Neil Gorsuch in 2017 (Donnelly, Heitkamp, and Manchin). Even Brett Kavanaugh received one Democratic vote in 2018 (again, Manchin).

But when it came to Barrett, not one Democrat voted for her. Not one.

This happened despite her receiving a “‘Well Qualified’ rating from the American Bar Association (ABA) whose representatives relayed descriptions of her as ‘brilliant’ and an ‘intellectual giant.’”

And this happened despite there being no allegations of sexual impropriety to dog her, as with the attacks on Kavanaugh.

Not a Single Democrat

The senators should know that, when the president and Senate are of the same party, they have consistently voted to appoint new Supreme Court justices during election years. So, this was hardly an unprecedented move.

The stark reality is that, on this historic day, when a highly-qualified woman was appointed to take the place of the iconic Ruth Bader Ginsburg, not a single Democrat could be found to vote for her.

And, while some senators might honestly believe that Barrett would vote to deprive millions of Americans of healthcare, I would dare say that, for others, this was simply a political talking point.

No, the stark reality is that, on this historic day, when a highly-qualified woman was appointed to take the place of the iconic Ruth Bader Ginsburg, not a single Democrat could be found to vote for her.

Let the record be remembered for posterity.

Republicans Have Tended to Vote on Legal Suitability

Gone are the days when someone like Justice Ginsburg could be confirmed by a vote of 96-3. Or Justice Antonin Scalia by a vote of 98-0. Obviously, there was much more bipartisanship on both sides in the past.

But, reviewing the voting of the last 40 years, it’s clear that it is the Democrats who have dug in their heels against conservative justices rather than Republicans doing the same with liberals. (I’m talking about actual votes, not refusing to vote on a nominee during a divided election year.)

As for Robert Bork, he was infamously rejected (“borked,” to be precise), by a vote of 42-58. (As Frank Turek recently pointed out, had Bork, not Kennedy, been appointed to the court, Roe v. Wade might have been overturned in 1992.)

Under George H. W. Bush, David H. Souter was confirmed 90-9 while Clarence H. Thomas, after a tumultuous hearing, barely made it by a vote of 52-48. The pattern is crystal clear.

Both of Bill Clinton’s nominees were confirmed with ease. Ginsburg, as mentioned, by a vote of 96-3 (despite being famously progressive) and Stephen G. Breyer by a vote of 87-9.

Under George W. Bush, John G. Roberts was confirmed 78-22 while the more conservative Samuel Alito had a much tougher battle, getting in by a vote of 58-42.

Under Barack Obama, and in a time of deep political divide, his two nominees were still confirmed with relative ease, Sonia Sotomayor by a vote of 68-31 and Elena Kagan by a vote of 63-37. And did anyone really wonder how these new justices would rule?

It is true that the Republicans stifled Obama’s attempts to appoint Merrick B. Garland to the court. But, as mentioned, that has happened before during election years when the White House and the Senate were controlled by different parties.

But, when it comes to overall voting patterns, despite the known liberal proclivities of the Democratic nominees, the Republicans have focused more on the legal suitability of the nominee rather than the ideology of the nominee.

The Democrats Have a Pattern of Making Their Positions Clear

Thus, there is no Republican parallel to the voting tallies for the three justices nominated by President Donald Trump: Gorsuch, 54-45; Kavanaugh, 50-48; Barrett, 52-48.

Neither is there a parallel to the borking of the great legal scholar Robert Bork nor to the vicious attacks and then narrow confirmation of Clarence Thomas.

I’m quite aware that both political parties are flawed and that the political system itself is marred by greed, lust for power, backroom deals and corruption. I’m also sure that different constituents can point to different strengths and weaknesses within each party.

Surely, the Republicans are not all good and the Democrats all evil. Not a chance.

But when it comes to some of the greatest issues of our day, issues that touch on our most fundamental freedoms, on the definition of marriage, and on the sanctity of life, the Democrats have been making their positions clear.

Now, they have spoken with one voice in their unanimous opposition to Justice Amy Coney Barrett. As summed up in the words of “nay” voting Democrat Mazie Hirono, “h*** no.”

Let the record, and these words, be remembered for posterity.

And let the record, and these words, be remembered on November 3.

The Democrats have spoken.