‘We Have No King But Caesar!’

Eric Metaxas' sobering new book warns of a Church surrendering to Caesar the way the German Church did in the 1930s. 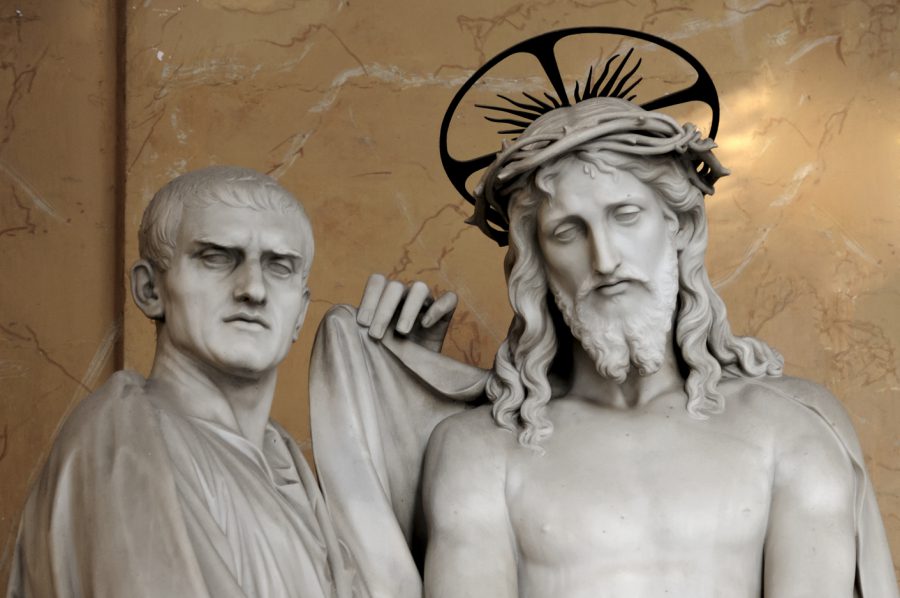 Eric Metaxas is a book-writing dynamo. He writes them faster than I can review them. His latest short, readable title is Letter to the American Church. In it, he warns that America today is in frightening ways like 1930s Germany as the Nazis were coming to power. And as if to prove that point, Merrick Garland has begun rounding up pro-life Christians.

Metaxas has an urgent message for America’s churches. “Speak up!” “Raise your voices!” “Make a loud noise!” For Metaxas, the Nazi rise to power in Germany can be blamed on the silence of the German churches. And he tells the story of Dietrich Bonhoeffer’s attempt — in vain, alas — to arouse German Lutherans from their quietist submission to Caesar. With the publication of this important new book, Metaxas threatens to become America’s Bonhoeffer. Unless this time the Church listens.

The Beginning of Dictatorship

Already, there are some discouraging signs. It has been over a month since the first pro-life activist and Catholic father of seven children, Mark Houck, was arrested by Garland’s FBI. To this date, there has been no statement from his bishop or pastor to defend him. Nor has any American church official denounced this gross human rights violation. Go take a look at the website of the U.S. Catholic bishops. You will find no mention of Mark Houck’s plight. Instead, there is only silence. The same silence that Metaxas warns against.

With the same predictable consequences: the tyrants feel emboldened, as the Nazis did with each easy victory. Two weeks following the Houck arrest, the DOJ announced the indictment of eleven more pro-life activists.

It was not until a Catholic prelate from Germany arrived that we heard any defense from a church official of the innocent pro-life activists. Remembering his own nation’s tragic history, Cardinal Gerhard Müller did not mince words:

Persecution of the good people is always a sign of the beginning of dictatorship and tyranny. … I hope that the American government will apologize for this brutal act against humanity. Amen.

A Theology of Truth-Telling

If only an American bishop had spoken up sooner and as forcefully as Müller. Perhaps Garland’s DOJ would have reversed course and never indicted the other eleven pro-life activists. Of course that’s speculation. But it’s part of the Metaxas argument that speaking up and denouncing evil is not just our duty: it can be a powerful political force. He cites William Wilberforce as an example. In 2009, Metaxas penned an inspiring biography of William Wilberforce, an 18th century British member of Parliament whose religious beliefs moved him to lead the fight against the slave trade. It was a fight he eventually won.

To Metaxas, Wilberforce exemplifies the right relationship of religion to politics. That’s the view of Abraham Kuyper, a 19th century Dutch Reformed statesman and theologian who promoted a form of Christian activism. For Kuyper, Christianity isn’t just what we do on Sundays. It affects every area of life. Metaxas reminds us that this muscular version of religion is the one you find in the Bible. He cites Proverbs 24 to make his point: “Rescue those being led away to death; hold back those staggering toward slaughter.”

Silence in the Face of Evil Is … Evil

Metaxas is also an expert on Dietrich Bonhoeffer. He authored a highly acclaimed biography of the twentieth-century martyr. Metaxas reminds us of Bonhoeffer’s first principle of Christian activism: the Church is the conscience of the state. True to his principles, Bonhoeffer pleaded with the churches to do more for the defense of the Jewish people from Hitler. Just so, America’s pro-life Christians defend the unborn. But Metaxas surmises, I think correctly, that many today might need to be reminded of this Christian duty. Not to speak out against evil, Metaxas proclaims, is to participate in evil.

Recent political events seem to favor Metaxas’ advocacy for political action and protest. Christians are not doomed to failure. Wilberforce, after a long struggle, succeeded. The Supreme Court overturned the corrupt, dishonest precedents of Roe v. Wade and Planned Parenthood v. Casey in 2022. And the many angry parents who showed up to school boards seem to have turned the state of Virginia from blue to red.

Their impassioned fight has ignited a parental rights movement across the country. Its goal? To keep the insane LGBT gender politics of Democrats away from kids and schools. Make no mistake. The radical sex agenda of the far Left is now mainstream in the Democratic Party. Today, Democrats are busy rewriting Title IX to impose LGBTQMYNAMEISLEGION “equality” on people of faith in all 50 states. A federal court recently ruled that Yeshiva University, a private Jewish college, is required to allow an LGBT club on its campus, the Hebrew Bible be damned. This is the existential threat that all people of Biblical faith face today.

Letter to the American Church is exactly the book we need, as the Democratic Party adopts fascist methods and habits. Metaxas is right to lay this crisis in the lap of the American churches. Even the Left is vaguely aware that no amount of its propaganda can compete with the voices of trusted and respected pastors. That’s why it seeks to corrupt or silence the churches.

Christianity is the most powerful grassroots movement in history. Multiple presidential election cycles bear witness to the fact, that, when Christians get behind a candidate, he usually wins. And then there’s the pro-life movement. Its recent unlikely victory at the Supreme Court demonstrates the power of the American pulpit to move mountains in American politics.

Thus Metaxas is spot on in his analysis of our political situation. Indeed, if every American pastor spoke out against the Woke tyranny, this evil could be defeated. But tragically, just as Metaxas describes the church in Germany in the 1930s, the American church today is hopelessly divided.

Metaxas tells us that, of the roughly 18,000 pastors in Germany at the time, only 3,000 actively spoke against Hitler’s regime. Most kept quiet — some 12,000 church mice in all. The remaining 3,000 pastors formed the “Reich Church,” an actively pro-Nazi organization.

Today’s “Reich Church” is much larger. In the struggle to defend our right to believe in the Bible, today’s popular and powerful Reich church vehemently opposes us. Take Fr. James Martin, for example. Martin is an influential Catholic priest and bestselling author. He has routinely protested Catholic schools that have been forced to fire some gay activist teacher. Martin regularly takes the far left position that such firings are unjust discrimination.

When Martin opposes Biblical teaching, he undermines the First Amendment rights of all Bible believers, not just Catholics. When he screams discrimination, he is the enemy of Yeshiva University as much as that of Catholic institutions.

And Martin is hardly alone in the Catholic Church. Right now, the Catholic Church is holding a global synod that is considering changing its teaching on homosexuality. If that happens, Catholics will lose all their First Amendment protections. Schools will no longer be able to teach that homosexuality is a sin without incurring a discrimination lawsuit, where the Justice Department would cite the Vatican to “prove” that their decision is not demanded by their own church. But it isn’t just Catholics who are affected.

The Stream’s John Zmirak was the first person to recognize, six long years ago, that the Catholic apostasy would destroy the First Amendment protections of Christians. Justice Department lawyers would cite that contemptible surrender to bolster their argument that orthodox readings of the Bible are optional, and since they’re “homophobic” and discriminatory, illegal. Today, a growing consensus is emerging that agrees with Zmirak’s prescient analysis. Indeed, the Catholic apostasy poses an existential threat to all Bible-believers.

What we need today is a new Manhattan Declaration. That 2009 document, as Metaxas reminds us, defended our right to live by the teachings of the Bible. This is what the Biden administration is attacking. Democrats are rewriting Title IX to deny Christians the right to dissent against gay equality. And the Alliance Defending Freedom is warning that the Respect for Marriage Act — just signed into law by Biden — is a direct threat to the religious liberty of Bible-believing Americans. 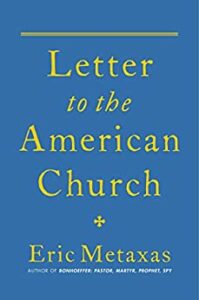 Indeed the Woke politics of the Democrat regime poses an extreme threat to Christians and Jews. The arrest of pro-life activists makes this abundantly clear. But there is a second front to this war. And the new front is against an activist “Reich” church that rejects the Bible. The current pope’s contempt for the Holy Bible will be the undoing of Catholic schools in America. And the ripple effects will be felt by every Christian and Jew, as they face unprecedented assaults against their religious freedom. Any renewal of the Manhattan Declaration must recognize this threat as well.

Kudos to Metaxas for sounding the alarm against tyranny. Churches must march for religious freedom just as they have marched for the rights of the unborn. His cry from the heart in Letter to the American Church is essential reading for all religious people and anyone who cares about freedom and democracy. Get it. Read it. Press it on your friends.

John Gravino is the author of The Immoral Landscape of the New Atheism, which was the topic of a health and spirituality seminar at Duke Medical School. His new book, Confronting the Pope of Suspicion, is available on Amazon. He continues to explore the intersection of health and religion and the other big questions of life at his website, NewWalden.org.

Interview With Eric Metaxas: Is the American Church Caving in Like the German Church Under Hitler?