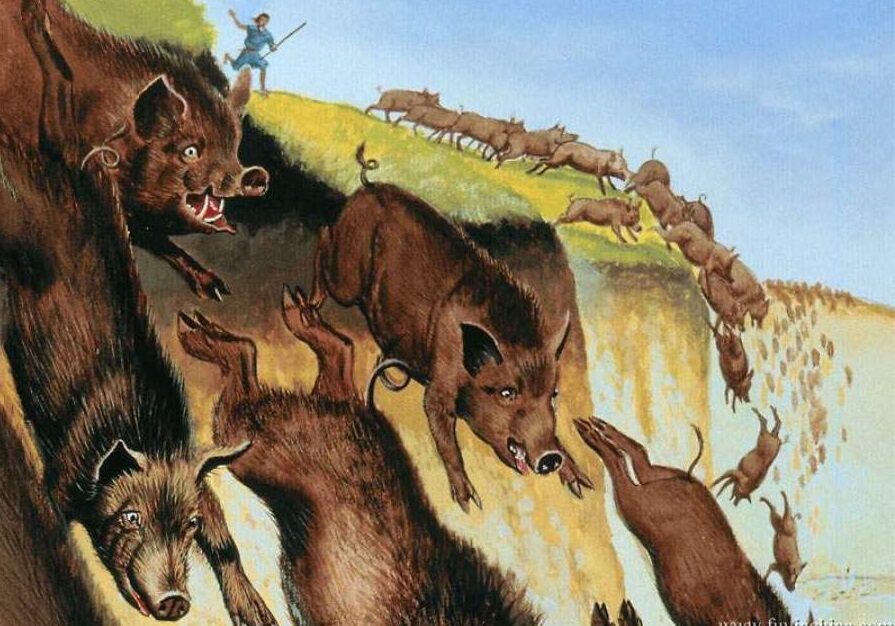 Maybe you saw me the other night, appearing on Tucker Carlson’s show. It was a great honor to talk to one of America’s great truthtellers of course. But the occasion was a sad one. I went on to talk about my column on the death of Prof. Mike Adams. I contrasted the left’s success at hounding him to suicide with the outlier fate of Nick Sandmann. We might take comfort that “the system works” from that young man’s successful pursuit of damages from a few members of the media mob that tried to destroy him. We would be wrong.

Sandmann isn’t the canary in the coal mine, but the one that flew away. The door on the cage broke for a moment, and that good young Christian pro-lifer escaped suffocation. The left has since then made sure to weld it shut.

What’s at Stake in November

Want to know what’s at stake in this election? Talk to Mike Adams. Of course, you can’t, since he’s no longer with us. Maybe talk to God on his behalf in prayer. But we do have something that Adams told an interviewer just two weeks before his death. It’s particularly haunting, considering what happened next. He gave a front line report on the spiritual warfare we face, which finally claimed him. Read it and weep.

Or maybe you should ask black Trump supporter Bernell Trammell. Again, you can’t, because someone gunned him down in broad daylight in Milwaukee. Move along folks, nothing to see here.

The Book You’re Not Supposed to Read

You might want to read a prophetic novel, which in the early 1970s predicted, with creepy accuracy, how the Woke cult would murder the West. Jean Raspail’s The Camp of the Saints did exactly that. But good luck reading it: the book is effectively banned, out of print, and its Kindle edition stuck under “permanent review.”

You see, the Southern Poverty Law Center deemed it “racist.” So you’re not supposed to read it, to check that claim out yourself. (Please do. An online edition still exists, for now.) I have read it, and it does contain a few passages that I find offensive, over against hundreds of pages of deadly prophetic events and characters pulled from the headlines of 2020. Merchant of Venice has quite a few offensive passages too. Maybe it’s next for the shredder.

A Soviet Show Trial Before Congress

But if you really want to know what’s at stake this November, you probably ought to listen to what Bill Barr said to Congress. Oops, that’s almost impossible. The Democrats who asked him to testify and then posed him questions, shouted him down and refused to let him speak. His testimony quickly took on the atmosphere of a Nazi or Soviet show trial, where prosecutors and even defense attorneys berate the hapless defendant, who may speak only if he’s willing to make some absurd confession to spying for some foreign power. (Sound familiar?) As Andrew McCarthy observed at National Review:

It doesn’t matter how you feel about Donald Trump or Bill Barr. A faction that would rather delegitimize than debate its opposition can do that to anyone or anything.

Barr Fought Back. Could You or I?

Maybe you didn’t watch the hearings, or don’t believe me. Watch this selection of golden moments from the Barr show trial.

We really do see here the stakes of this next election. Think about this the next time some churchy person wags his uncalloused finger at you about Donald Trump’s “character” or his “violation of norms.”

This is what Democrat congressmen are willing to do to the Attorney General of the United States. On television. Under a Republican president. On the eve of an election.

Just think what the thugs of Black Lives Matter, or Antifa, or whatever other political hit squad replaces the defunded police in your city would do to you, your spouse, or your kids. Under a Democrat president. In secret.

America isn’t magic. It might be exceptional, but it’s not immune to principalities and powers, of the kind that plunged France into Hell in 1789, Germany in 1933, and Cambodia in 1975. The last time the Democrats and the religious left got together, they produced the Rev. Jim Jones’ colony in Guyana. Imagine that on a vast, continental scale, in 2021.

The most astonishing moments at the Barr hearing came when the members of Congress would pose him questions, then halt his answers with the rote phrase, “I am reclaiming my time.”

We must reclaim our time for Christ, for our ancestors who built an imperfect but deeply decent country, and our descendants who deserve somewhere better to live than a huge, nuclear-armed Venezuela.

Each of us must hold his neighbors back. Stop them from chasing the Gadarene swine all the way down the slippery slope.