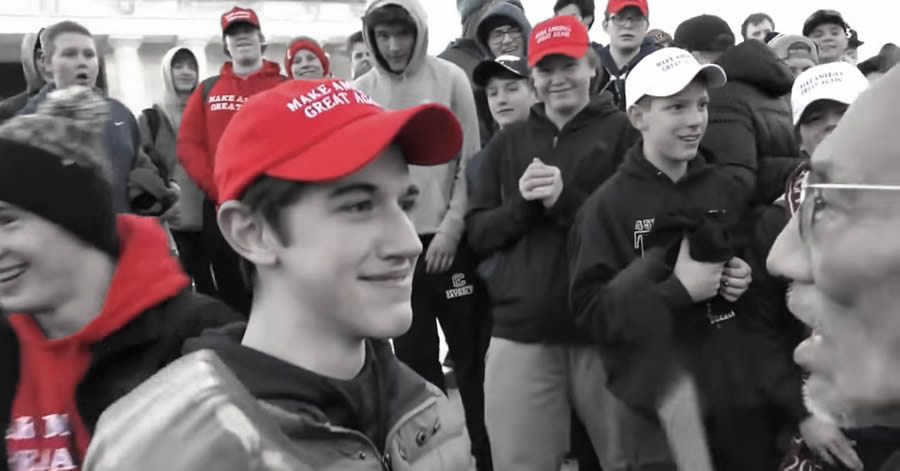 Nick Sandmann just turned 18 years old. And he’s settling a $250 million lawsuit with major media outlets that libeled him. Let’s send him our congratulations and prayers.

I was prepping Robert Oscar Lopez’s powerful piece on Mike Adams for publication when I realized something chilling. Reading how the left hounded that talented writer to suicide (if indeed he wasn’t murdered) I heard in my head the media headline that never ran. Thanks be to God.

When Sandmann’s own Catholic bishop threw him to the wolves, when his school suspended him, when “conservative” columnists at National Review and other venues denounced him as “bigoted,” they were writing him off for life. They were branding him on his face with the most destructive charge available in America. The charge that’s now burning cities and getting Trump supporters murdered.

All for what crime, exactly? For waiting for a bus after a pro-life demonstration. And smiling while white. For Sandmann standing his ground, when some “Indian tribal elder” confronted him with a war drum. Ah, but Sandmann and his friends were supposed to give way. They should have taken a knee. Maybe flattened themselves to form a human red carpet, so the “tribal elder” could walk all over them. You know, as cops in Portland and Chicago are apparently ordered to do, in the face of violent mobs.

One leftist after another pointed out Sandmann’s unforgivable sin. That he was smiling. He didn’t look terrified, guilt-struck, or even enraged. He was calm, confident, and amiable. Perhaps those character traits are now part of “white privilege,” as the Smithsonian now explains. I read at least a dozen columnists or reporters expatiate on that smile, comparing Sandmann to settlers who slaughtered Indians, or concentration camp guards.

Mike Adams’ crime was similar. He wrote with verve and humor. He seemed like a happy warrior. He didn’t cave at false charges, or wallow in synthetic guilt. Nor twist himself into pretzels, as timid “conservatives” do, who are eager to placate the crocodiles by feeding them someone else. Someone like Nick Sandmann.

Or like pro-life stalwart Rep. Steve King, whom fellow conservatives turned on and turned out of Congress, based on false charges of racism. The source? An unrecorded interview with a New York Times reporter. Now the Times wouldn’t butcher a conservative congressman’s quote, you say to yourself. It’s the “newspaper of record.” It told us all about Donald Trump’s career as a Russian agent, didn’t it?

Or Stream columnist Mark Judge, who for some reason isn’t winning a $250 million defamation lawsuit against the network that accused him of leading a teenage rape gang. Instead, he’s eking out a living, when he can. Not one of the deep-pocketed conservative groups that fund-raised over helping to back Brett Kavanaugh are willing to give this talented writer a job. His crime?

Going to high school with Kavanaugh, and publishing a memoir the left used as a story bible for Christine Blasey Ford’s perjury. (That’s where they got all the realistic-sounding details she repeated.) You see, he’d admitted in the memoir that teenage alcoholism had caused him memory lapses. That made Judge the perfect patsy, since if called before the Senate to testify he couldn’t convincingly refute the false charges against him. “Are you certain, Mr. Judge, that you and Judge Kavanaugh never gang-raped anyone? You yourself have admitted… .”

Or Bernell Trammell, a black Trump supporter murdered this weekend in Milwaukee. As The New York Post reported: “‘Because of Trammell’s well-known political activism and the possibility that his murder could be politically motivated, I respectfully request that United States Attorney Matthew Krueger open an investigation,’ said Andrew Hitt, chairman of the Republican Party of Wisconsin, late Friday.”

In 2020, the black cult members would feel emboldened to simply attack Sandmann and his friends. The police would stand down at the mayor’s orders. And even if the BHI had beaten the Covington boys to death, no TV network would air it. Not even Fox.

When mayors turn their cities over to violent mobs, and only keep the police around to disarm honest citizens, this is what happens to those on the wrong side of the mob. Expect more such murders soon.

If Nick Sandmann Had Smiled in 2020

I’m relieved and delighted by the miracle that spared Nick Sandmann their fate. Why did the left’s bullets miss him? A gang of rabid anti-white radicals — not Black Lives Matter, but the similarly unhinged Black Hebrew Israelites (BHI) — had been taunting, cursing and threatening the Covington boys for more than an hour. The “Indian tribal elder” apparently joined in on the BHI’s side. None of that would excuse Sandmann for smiling while white, of course. But through some divine intervention, one of the BHI thugs videotaped the whole encounter. He posted it online.

That raw footage showed how crudely CNN and others had doctored their accounts of the confrontation. No, the white teens hadn’t “crowded” or “mobbed” or surrounded the “tribal elder.” He’d marched up into their faces, banging a war drum. And they’d simply stood their ground.

That was enough to flip the narrative surrounding Mr. Sandmann. Would it be enough today? I really don’t think so. Today, the media would render the white pro-lifers’ simple refusal to kow-tow or take a knee as “provocative white privilege.” In 2020, the black cult members would feel emboldened to simply attack Sandmann and his friends. The police, badgered and threatened, would be far, far away, standing down at the mayor’s orders.

And even if the BHI had beaten the Covington boys to death, no TV network would air it. Not even Fox.

They’re Coming for Us

That’s where we stand in 2020, as leftists verbally tap dance on Mike Adams’ coffin. I wish Mr. Sandmann well, and advise him to take his money and move somewhere sane, like Poland. Maybe start a Catholic college there. Because the kind of leftists who dug up Adams’ columns from 20 years ago to goad him to his grave aren’t finished with Nick Sandmann. They can’t forgive his innocence, his victory, or his smile.

Get yourself to the gun range. Make friends there. Organize local militias, to step in when the police (afraid for their pensions) meekly disband. We don’t need two Americans like the McCloskeys in St. Louis, but two million or ten million. That’s the only way this madness ends.