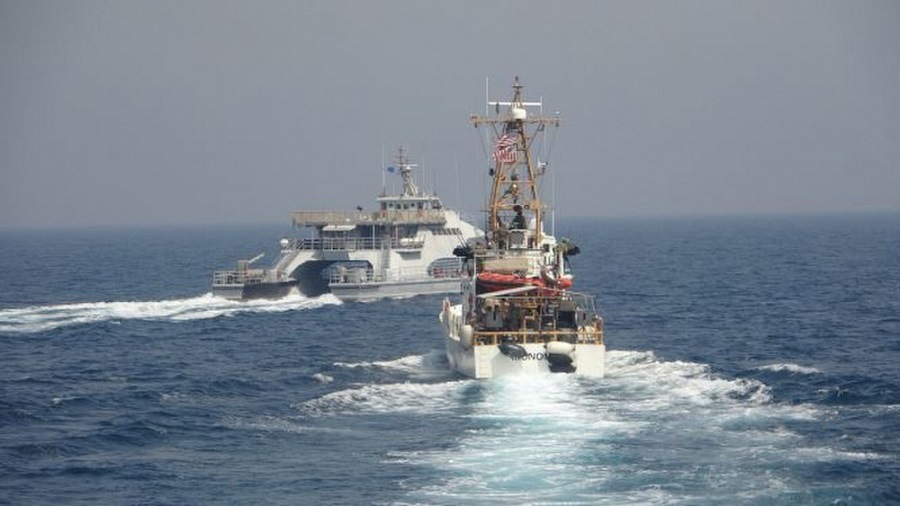 Fears of war with Iran intensified this week after U.S. Coast Guard ships were once again forced to fire warning shots at Iranian boats.

About 30 shots were fired after 13 Iranian Islamic Revolutionary Guard Corps (IRGC) Navy fast attack boats came within just 150 yards of six U.S. Navy vessels in the Strait of Hormuz. The U.S. Navy guided missile submarine USS Georgia was also in the vicinity, according to the Pentagon and videos released by the Navy’s 5th Fleet.

Full clips showing IRGCN unsafe & unprofessional maneuvers in close proximity to our ships, including guided-missile submarine USS Georgia transiting on the surface in the Strait of Hormuz. pic.twitter.com/CyHhvEhavo

Warning shots also had to be fired at Iranian ships on April 26. The U.S. Navy image displayed at the top of this page also shows an IRGC Navy boat harassing a U.S. Coast Guard ship on April 2 in the Arabian Sea.

Speaking of the Arabian Sea, the U.S. Navy reportedly seized thousands of weapons from a ship sailing from Iran to Yemen late last week. The guided-missile cruiser USS Monterey intercepted the huge cache of Russian and Chinese-made rifles and missiles.

Thousands of illicit weapons interdicted by guided-missile cruiser @USSMonterey (CG 61) from a stateless dhow in international waters of the North Arabian Sea on May 6-7.

As brave Navy and Coast Guard men and women confront bad actors in the water, so are equally valiant U.S. troops on the ground in Syria and Iraq. Rocket and drone attacks carried out by Iranian-backed militia groups keep raining down on U.S. troops and contractors in Iraq, while in neighboring Syria, American service members are still at war with ISIS and other terrorist groups.

.@CJTFOIR soldiers in NE Syria coordinate every day w/our #SDF partners to provide them with the ability to effectively prevent a Daesh resurgence & promote regional stability. We remain committed as partners of the SDF in their fight to #DefeatDaesh. @cmoc_sdf pic.twitter.com/bynurn3kzh

The aforementioned violence combined with a raging war between Israel and the Hamas terrorist group has raised tensions in the region to levels not seen in several years. Please pray for all U.S. troops serving in the Middle East, as well as their families here at home.

“We need to get these people out.”

Those dramatic words were uttered this week by Green Beret combat veteran Rep. Michael Waltz, who is now a Republican member of Congress. He was speaking about Afghan patriots who have worked hand-in-hand with U.S. troops and government officials during the nearly 20-year war.

If the Biden administration fails to protect and evacuate these Afghans as it moves forward with its plan to end America’s longest war by September 11 of this year, Rep. Waltz said they face a “death sentence” from Taliban and al Qaeda terrorists.

“These people who stood with us are being hunted down as we speak,” Waltz said during House Armed Services Committee hearing this week, as quoted by NBC News.

In the words of Marc Polymeropoulos, a former CIA operative and author of the forthcoming Clarity in Crisis: Leadership Lessons from the CIA, safely evacuating these Afghans is “a moral imperative to do the right thing.” They did their part. Now it’s time to do ours. 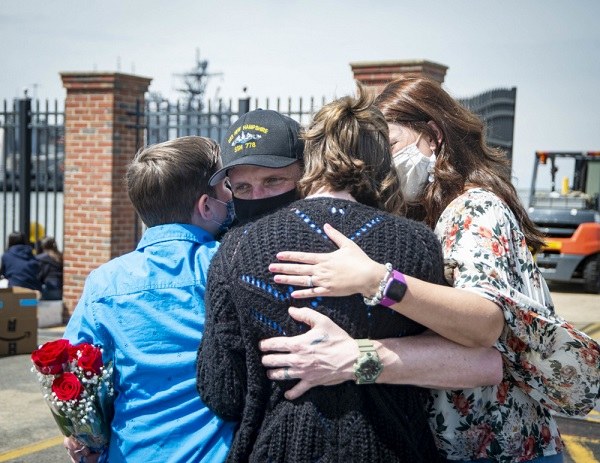 A U.S. Navy sailor embraces his family during the USS New Hampshire‘s homecoming at Naval Station Norfolk in Virginia on May 7, 2021.

Welcome home, heroes! Thank you for your service and sacrifice.