From civil unrest to coronavirus to terrorism, the brave men and women of the U.S. Armed Forces are risking their lives to keep us safe. 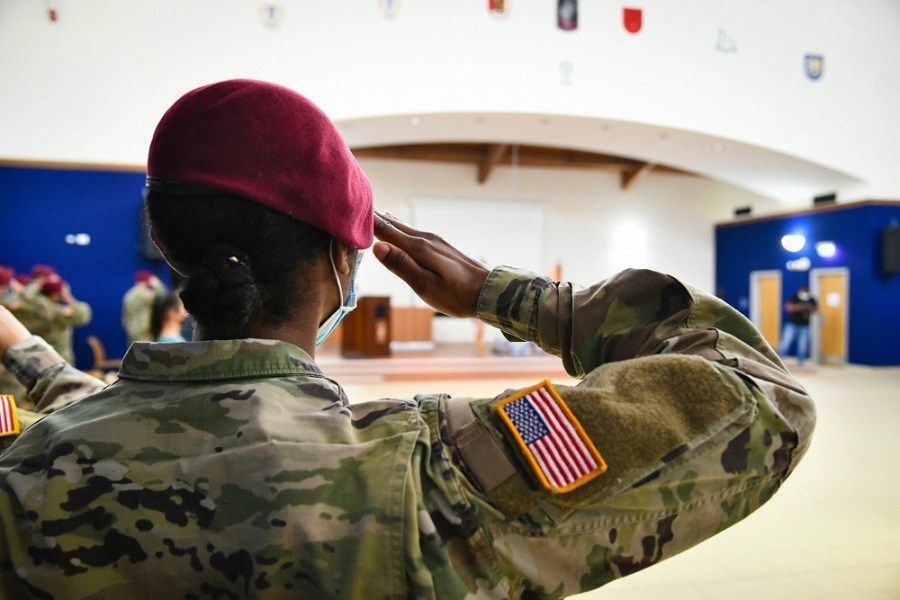 A U.S. Army paratrooper salutes during the National Anthem to conclude a change of responsibility ceremony at Caserma Del Din in Vicenza, Italy, on June 11, 2020.

While the national media doesn’t seem to be paying as much attention to the coronavirus pandemic as it was a few short weeks ago, the U.S. military is still at war with COVID-19.

According to the U.S. National Guard, more than 37,000 members were busy fighting the war on coronavirus as of Thursday morning. From conducting tests and getting supplies to those in need to manning call centers, our country’s brave men and women in uniform are performing with quiet brilliance.

Today, more than 37,000 National Guard members are supporting the COVID-19 response at the direction of their governors. Here's a quick look at how our Soldiers and Airmen have assisted communities across America. #InThisTogether pic.twitter.com/DKNuc6SlQK

Sadly, McClatchy DC reported earlier this week that several members of the Nebraska and Washington, D.C. National Guard have tested positive for COVID-19 after responding to protests and riots.

“We can confirm that we have had COVID-19 positive tests with the DCNG,” D.C. National Guard spokeswoman Lt. Col. Brooke Davis told McClatchy. “The safety and security of our personnel is always a concern, especially in light of the COVID-19 era.”

Please pray for these courageous service members and their families. We ask God to heal these patriots.

More than 32,000 members of the National Guard were activated for civil unrest missions in the wake of recent protests and riots, according to PBS. Some of those units, including 200 soldiers with the 19th Special Forces Group (Airborne) of the Utah National Guard, have returned home from their mission to the nation’s capital.

“Morale was high, and our soldiers wanted to be there,” Utah Army National Guard Command Sgt. Maj. Jason Legler said. “In fact, I had to turn some volunteers away because we had a limit on how many folks we could send out.”

At the epicenter of the civil unrest in Minnesota, neighbors stepped up to keep watch over the homes of deployed National Guard service members.

“That’s why you move to a small town, you get the great sense of community and stuff like that,” Troy Bruflat, a public works director in western Minnesota, told WCCO-TV. “We want to help them out while they are out helping other people.”

With much of the media largely uninterested in the ongoing war on terrorism, here is an update on what’s happening on two of the conflict’s most crucial battlefields: Afghanistan and Syria.

In Afghanistan, “the Taliban have not yet met conditions required for a complete U.S. troop withdrawal from Afghanistan by next May as envisioned in a U.S.-Taliban deal signed in February,” according to the Army Times.

The report quotes Gen. Frank McKenzie, head of U.S. Central Command, as saying “those conditions would be: an we be assured that attacks against us will not be generated there? And as of right now … frankly, if asked my opinion, those conditions have not been fully met.”

Taliban have not yet met conditions for complete troop withdrawal, says the top US general in the Mideast https://t.co/uzv1d7Acgn pic.twitter.com/DzowOZEN1N

General McKenzie also confirmed the continuing presence of U.S. troops in Syria, as you may have seen last week in The Stream‘s daily Military Photo of the Day feature.

“Over time, [Syrian President] Bashar al-Assad is probably going to turn to the east and increase pressure on us, and we’ll deal with that as it happens,” said Gen. McKenzie, as quoted by the Military Times.

Please pray for the valiant volunteer warriors fighting America’s war on terrorism at this hour in Afghanistan, Syria and other dangerous places around the world.

Tentative dates and times have been set for the funeral of Medal of Honor recipient and U.S. Secret Service agent Ronald J. Shurer II, who passed away in May after bravely battling cancer. Staff Sgt. Shurer will be laid to rest at Arlington National Cemetery on October 27, barring coronavirus-related changes.

A message from Miranda: Thank you to all of you who have reached out over the past month. The support has meant so much to our family. Tentative dates and times have been set for services to honor Ron. This is all pending the lifting of COVID 19 restrictions. His burial at Arlington National Cemetery will be at 3pm on October 27, 2020. There will be visitation hours at Fairfax Memorial Funeral Home on October 26, 2020 from 1-3pm and 5-7pm. A funeral mass will be held at Nativity Catholic Church at 12noon on October 27, 2020 preceding the 3pm service at Arlington National Cemetery. All are welcome to join us. A reception will be held that evening as well, more details to come as the date gets closer. Again, this is tentative and subject to change. If you are traveling from out of town, please make sure any travel plans are refundable/adjustable. #shurerstrong

I had the privilege of speaking with this Afghanistan war hero the day before he was readmitted to the hospital. Please continue to pray for his wife, Miranda, their sons, loved ones, friends and fellow soldiers. Ron’s selfless legacy will never be forgotten.

U.S. Air Force airmen with the 34th Fighter Squadron are finally back in the arms of their loved ones after an overseas deployment. 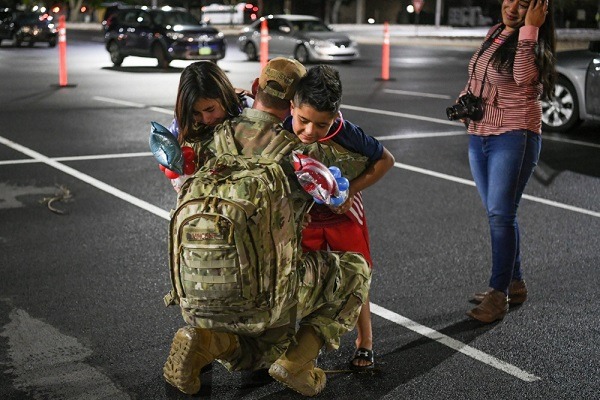 A U.S. Air Force airman is greeted by his family while returning home from a deployment on June 7, 2020 at Hill Air Force Base in Utah.

Tom Sileo is a contributing senior editor of The Stream. He is co-author of 8 Seconds of Courage, Brothers Forever, Fire in My Eyes and the forthcoming Three Wise Men: A Navy SEAL, a Green Beret and How Their Marine Brother Became a War’s Sole Survivor. Follow Tom on Twitter @TSileo and The Stream at @Streamdotorg.