Americans Unite to Remember a Hero and Pray for His Family

U.S. Secret Service agent Ronald J. Shurer II died on Thursday after a valiant 4-year battle with cancer. He received the Medal of Honor from President Trump in 2018 for gallantry in combat while serving as a U.S. Army Green Beret in Afghanistan. 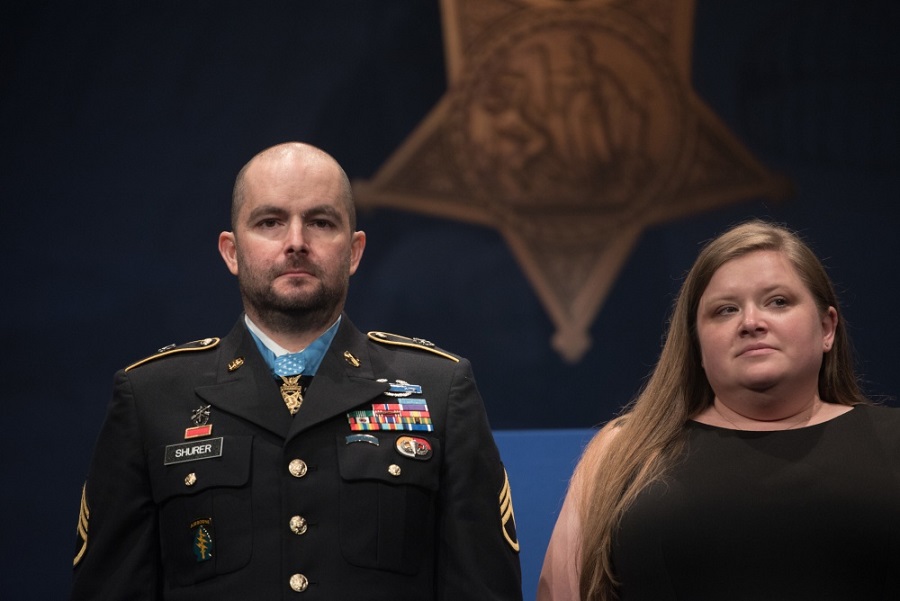 Joined by his wife Miranda, U.S. Army Staff Sgt. Ronald J. Shurer II is inducted into the Pentagon's Hall of Heroes on October 2, 2018, the day after he received the Medal of Honor from President Donald Trump.

“As many of you know, a year and a half ago, Ron was diagnosed with cancer — tough cancer, rough cancer,” President Trump said at Staff Sgt. Shurer’s 2018 White House Medal of Honor ceremony. “But he has braved, battled, worked — he has done everything he can. That cancer — he’s been fighting it every single day with courage and with strength. And he’s a warrior.”

Ron’s four-year cancer fight reached a critical stage on Wednesday, when the warrior’s wife and children announced on Instagram that their beloved husband and father had been unconscious for the past week.

Very upset to write this…. been unconscious for a week. They are going to try and take it out in a couple hours, they can’t tell me if it will work. #shurerstrong #specialforces #sfsg #usss #ussscat . . . . . All my love Miranda, Cameron, Tyler

On Thursday evening, the U.S. Secret Service announced that Ronald J. Shurer II had passed away at the age of 41. The tweet was quickly retweeted by the president Ron not only helped protect, but the same commander-in-chief who once placed the nation’s highest military award around his neck.

Ron was readmitted to the hospital on April 30, just four days after celebrating his wife’s birthday with their two sons. I spoke to Ron and Miranda on the phone on April 29 and will always treasure our conversation.

Though Ron was on oxygen and needed to take occasional breaks to catch his breath, I was amazed by his strength and equally inspired by Miranda as she helped care for her husband and two kids attending school remotely due to the coronavirus shutdown. They both spoke with clarity and resolve about not only fighting cancer, but helping others battling the disease.

To fully understand Ron’s selfless nature, one must examine the Green Beret medic’s remarkable actions on that faraway mountain in Afghanistan’s Shok Valley.

“When he reached the top [of the mountain], one of his close friends, an Afghan interpreter, was already dead,” President Trump said during the medal ceremony. “Two Americans had been shot: Dillon Behr and Luis Morales. He treated them both to stabilize them and their condition. Ron threw his body on top of Dillon to protect him from shrapnel.

“It was there on that cliff that Ron realized that — I guess, he felt pretty much like that was it. Right, Ron?” the president continued. “But Ron realized that this was probably the end. Might be all over. And as he recounts, ‘I just said a prayer and asked that my wife and son would be okay with what was going to happen. Then I just went back to work.'”

Two more of Ron’s Army brothers were shot in the harrowing moments that followed. Despite great risk to his own life, Ron successfully treated their wounds.

“But Ron was not done yet,” President Trump said. “He charged back to the mountain — all the way up — and then rejoined the fight. For more than six hours, Ron bravely faced down the enemy. Not a single American died in that brutal battle, thanks in great measure to Ron’s heroic actions.”

As the massive outpouring in response to Miranda’s final Instagram update before her husband’s passing showed, a virtual army of faithful Americans weren’t done praying for him, either.

Praying 🙏🏻 for you sir. Just wanted to thank you for your service to our nation. Our service members who could not come home are NOT forgotten. Thank you again. You have our support through your procedure and praying for the best. 🇺🇸 🇺🇸

Just as on that day when God listened to a future Medal of Honor recipient’s prayer from atop a mountain, I believe He heard us praying for this American hero and his magnificent family.

“And Ron, I just want to say, is an inspiration to everyone in this room and to every citizen all across our great land,” President Trump said in 2018. “Ron, our hearts are filled with gratitude and joy as we prepare to engrave your name alongside of America’s greatest heroes.”

America is eternally grateful to U.S. Army veteran and Secret Service agent Ronald J. Shurer II. It is now our duty to pray for Miranda, Cameron, Tyler, and all who knew, loved and served with this legendary soldier. Ron’s fight with cancer might have concluded, but his legacy of family, faith, resilience, selflessness and sacrifice will never die.

This Week at War: Defending America