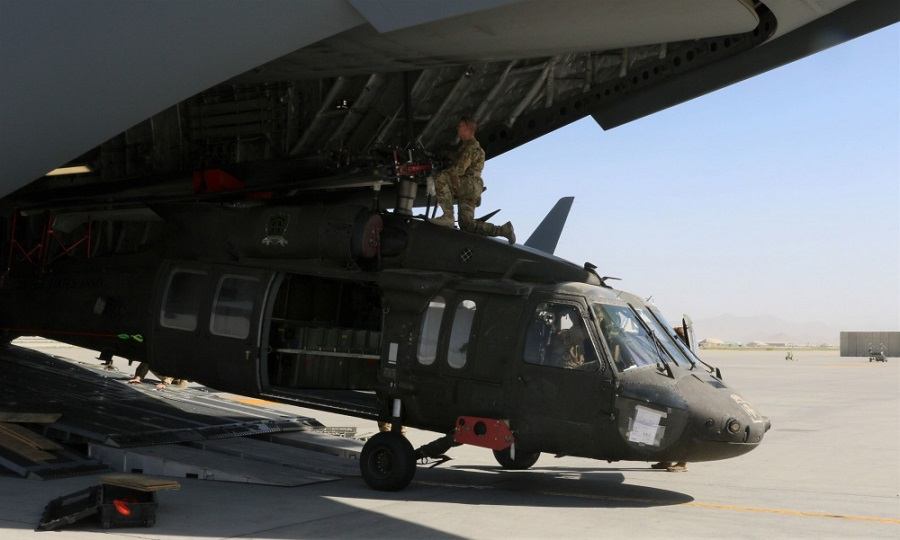 U.S. service members load a UH-60L Blackhawk helicopter into a C-17 Globemaster III in support of the military's withdrawal from Afghanistan on June 16, 2021.

The war in Afghanistan will be over in about a month. It was hard to tell this week, however, as American warplanes pounded Taliban targets at a much higher frequency.

The airstrikes used “both conventional warplanes and armed drones,” according to an Associated Press report. “The aircraft are being flown from bases outside of Afghanistan because the U.S. military has pulled all of its combat planes out of the country,” the AP article added.

“The United States has increased airstrikes in the support of Afghan forces over the last several days, and we’re prepared to continue this heightened level of support in the coming weeks if the Taliban continue their attacks,” U.S. Central Command Gen. Frank McKenzie said. “I reassured the government that we are continuing to provide airstrikes in defense of (the Afghan National Security) forces under attack by the Taliban, contract logistics support both here in Kabul and over-the-horizon in the region, funding for them, intelligence sharing, and advising and assisting through security consultations at the strategic level.”

As brave American pilots risk their safety by flying back into the war zone, U.S. Central Command announced this week that the withdrawal from Afghanistan is now 95 percent complete.

As the U.S. withdraws from a 20-year conflict, Iran is stepping in and the Taliban is gaining ground. FRONTLINE investigates in “Leaving Afghanistan.” STREAM NOW: https://t.co/qh0SvnIxcU pic.twitter.com/8tugnN31V1

Tragically, the Taliban has been murdering civilians and gaining ground throughout the withdrawal process, according to an extensive new PBS Frontline documentary. Just as troubling is Iran’s increasing influence over the war-torn country, which could have national security implication for decades to come.

Please pray for all U.S. troops and Afghan soldiers, interpreters and innocent civilians during this uncertain and perilous time.

President Joe Biden has decided to end the American combat mission in Iraq by the end of this year.

Reuters reports that President Biden and Iraqi Prime Minister Mustafa al-Kadhimi reached an agreement that would allow U.S. forces to keep operating in an advisory capacity beginning in 2022. About 2,500 American troops are still at war with ISIS terrorists in Iraq.

“The U.S. role in Iraq will shift entirely to training and advising the Iraqi military to defend itself,” the Reuters report said.

Great work from @iraqicts! They captured 14 Daesh terrorist gang members including 3 prominent members thru a series of raids in Baghdad, Anbar, Diyala & Salah Ad-Din. Part of the op was assisted by Sulaimani Asayish. The #ISF is in the lead in the #defeatdaesh mission.

Over the past week, U.S. and coalition troops supported several Iraqi-led raids aimed at crushing ISIS in the Middle East. Fourteen ISIS terrorists were captured during a series of operations in Baghdad, Anbar, Diyala and Salah Ad-Din, according to the U.S. military spokesman’s tweet shown above.

In another mission, the anti-terror coalition supported the Peshmerga during a combat operation against ISIS in northern Iraq’s Kurdistan region. Military commanders believe enemy fighters evacuated their positions ahead of the raid.

In Syria, where several hundred U.S. troops are serving in what is perhaps the world’s most dangerous war zone, four terrorists were apprehended earlier this week in al-Shahil. While announcing the arrests, the U.S. military reaffirmed its commitment “to supporting the (Syrian Democratic Forces) to combat terrorism and ensure a long-term stability in Northeast Syria.”

A group of airmen recently returned to South Carolina after spending the last several months deployed to Saudi Arabia. 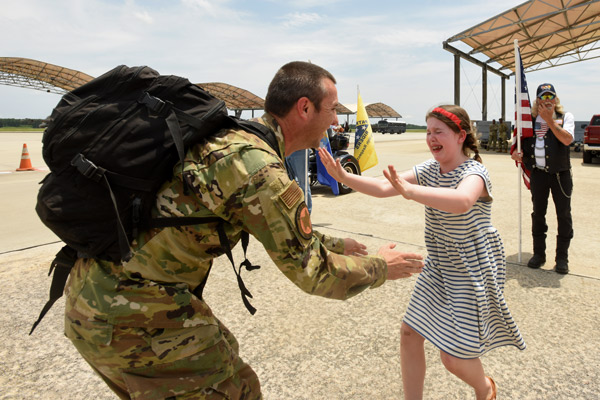 A U.S. Air Force airman returns to the McEntire Joint National Guard Base in South Carolina on July 18, 2021, from a deployment to the Middle East.

Welcome home, warriors! Thank you for serving our nation overseas.