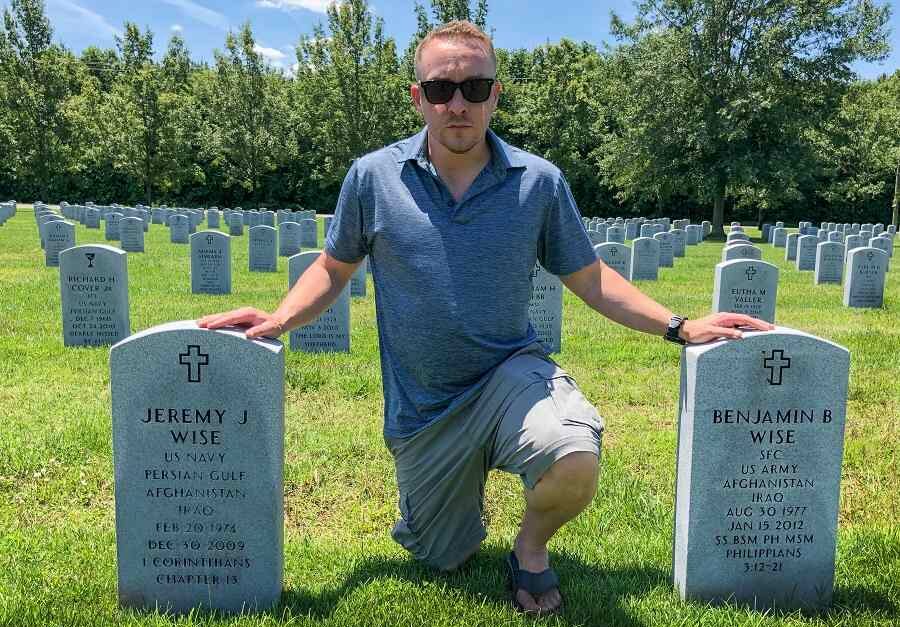 Veterans Day is a time to honor all who’ve proudly worn our nation’s uniform. For combat veteran Beau Wise, it’s also a time to remember his two big brothers, Jeremy and Ben.

Jeremy, a U.S. Navy SEAL who later became a contractor for the CIA, was killed in a 2009 sneak attack by al Qaeda in Afghanistan. Just over two years later, U.S. Army Green Beret Ben Wise died after being badly wounded during a firefight with the Taliban. Beau, who was subsequently pulled from further combat duty, is the only service member in American history to lose two brothers during the war in Afghanistan.

As Beau says in the new trailer for our forthcoming book Three Wise Men: A Navy SEAL, a Green Beret, and How Their Marine Brother Became a War’s Sole Survivor, the hardest thing he ever had to do was tell his parents that they’d lost a second son upon their arrival in Germany, where military surgeons had spent several days frantically trying to save Ben’s life.

Even after writing Three Wise Men with Beau for more than two years and also becoming close friends, I cannot imagine what he and his family have been through. In Beau’s case, he is haunted not only by the deaths of his two brothers, but harrowing images he saw on the battlefield during his own two Afghanistan deployments.

While working together, Beau told me that he had considered ending his life in the aftermath of his second brother’s death. Beau then bravely decided to include his near-suicide attempt in our book, which will be released in January. By sharing this painful memory, Beau is hoping to help fellow veterans who might be considering suicide, which takes the lives of far too many of our nation’s heroes on a daily basis. Veterans Day is the perfect time for Americans to come together to help these warriors find light amid the darkness.

Despite everything Beau and his loved ones have been through, they have managed to maintain their strong faith in God. As you will read in Three Wise Men, prayer sustained Ben as he fought in Afghanistan after Jeremy’s death. Faith would later comfort Beau as he coped with Ben’s unthinkable passing just over two years later.

Sergeant First Class Ben Wise is buried with the Bible of a close friend and fellow combat veteran, Kevin Flike. Etched on Ben’s headstone is Philippians 3:12-21, which reads in part, “Their mind is set on earthly things. But our citizenship is in heaven. And we eagerly await a Savior from there, the Lord Jesus Christ, who, by the power that enables him to bring everything under his control, will transform our lowly bodies so that they will be like his glorious body.”

In faraway Khost, Afghanistan, a plaque honors the lives of seven fallen CIA heroes, including former Navy SEAL Jeremy Wise. Dedicated in 2010 by then-CIA Director Leon Panetta, the plaque includes a verse from Isaiah 6:8: “And I heard the voice of the Lord, saying, ‘Whom shall I send, and who will go for us?’ Then I said, ‘Here I am; send me.”

Thank God for blessing our country with heroes like Ben, Jeremy and Beau Wise. In addition to the best medical and mental health care, those who took it upon themselves to defend freedom and our flag deserve the eternal appreciation and respect of a grateful nation. For all Americans, every day should be Veterans Day.

Tom Sileo is a contributing senior editor of The Stream. Three Wise Men: A Navy SEAL, a Green Beret and How their Marine Brother Became a War’s Sole Survivor is available now for pre-order and will be released on January 5, 2021.