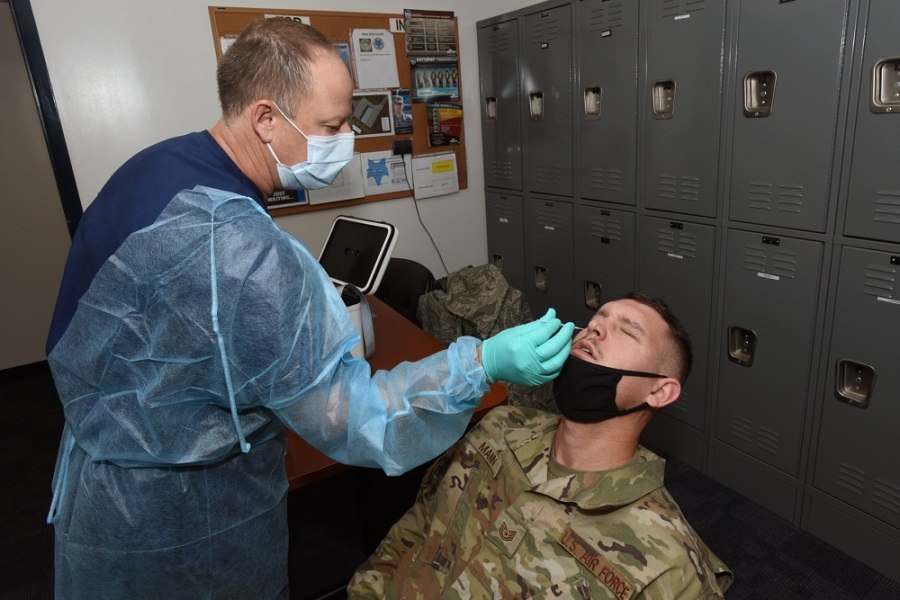 A U.S. Air Force doctor performs a nasopharyngeal swab on an airman with the South Carolina Air National Guard on September 25, 2020 at McEntire Joint National Guard Base.

For seven months, the U.S. military has been quietly fighting a war on COVID-19. That fight will surely continue amid the stunning early Friday morning news that the commander-in-chief had tested positive for the coronavirus. The Stream is praying for President Donald Trump, the First Lady and all Americans battling COVID-19.

Tragically, an eighth U.S. service member has succumbed to the virus. According to Military.com, Sgt. 1st Class Mike Markins passed away on September 26 in Elizabethtown, Kentucky. The 48-year-old Army reservist was stationed at Fort Knox and had served in the military for the past 28 years.

According to the fallen soldier’s obituary, SFC Markins leaves behind a son, father, girlfriend and two sisters. Please join The Stream in praying for them during this difficult hour of loss.

As of Thursday, there had been 45,759 COVID-19 cases inside military ranks, according to Department of Defense statistics. Of those infected, 30,756 have been classified as “recovered” and 618 have been hospitalized.

Around the country, members of the National Guard and other branches are still protecting nursing homes, distributing food and medical supplies, and assembling and administering COVID-19 tests.

Photo of the Day: @AZNationalGuard members prepare and deliver boxes of groceries to area residents at a food bank while supporting the community during the COVID-19 pandemic. https://t.co/lK7jeunACb #InThisTogether pic.twitter.com/r7keGYhYXi

Thank you to the heroes of the U.S. military for bravely manning the front lines of America’s war on COVID-19.

On the west coast, a different kid of war is being fought against deadly and destructive wildfires.

As you may have read last week on The Stream, thousands of National Guard troops, joined by hundreds of Marines and sailors from around the country, are battling the blazes from southern California all the way up to Washington and further east to states like Idaho.

The above images show just how hard members of the military are working to help firefighters extinguish these massive blazes. From helicopters and large buckets to other essential equipment and personnel, our brave men and women in uniform are stepping forward to protect our population.

Our thoughts and prayers are with everyone affected by these terrible fires.

It’s easy for a politician on either side of the aisle to claim the war in Afghanistan is ending or almost over. As members of the military know all to well, that is simply not the case.

Nearly 19 years after the start of America’s longest war, Military.com reports that a new Afghanistan deployment is on the horizon for the U.S. Army’s storied 10th Mountain Division.

“The 2nd Brigade Combat Team, based in Fort Drum, New York, will replace the 10th Mountain’s 1st Brigade Combat Team and participate in the U.S. counterterrorism mission against al-Qaeda and other terrorist groups, according to an Army news release,” Military.com defense reporter Matthew Cox wrote this week.

There are still about 8,500 U.S. troops in Afghanistan, although President Trump has repeatedly said that number will shrink by approximately 4,000 before November 3. Meanwhile, military families continue to bear the heaviest burdens of war while most of us look away. America should pay more attention to the war in Afghanistan until every single U.S. service member is home safely.

Photo of the Day: U.S. Army Sgt. Derick Bauman, left, and Spc. Nathan Hensal, crew chiefs with the 28th Expeditionary Combat Aviation Brigade, watch the sunset from a CH-47 Chinook helicopter as it flies over their area of operations in the Middle East. https://t.co/aqSXPzO9GC pic.twitter.com/boBZjercDz

As Special Forces warriors hunt down and kill ISIS and al-Qaeda terrorists in Syria, American forces continue to face danger in Iraq. On Tuesday, six rockets were reportedly fired at Erbil International Airport in northern Iraq. Three of those rockets struck a military base where U.S. troops are stationed, but thankfully, no injuries have been reported.

Please pray for all U.S. troops in harm’s way, as well as for their families here at home.

The new submarine USS Indiana is back home after leaving for its first voyage amid the COVID-19 pandemic. The U.S. Navy said that other than two stops in Spain, the submarine’s command and crew had “little contact with the outside world since March.” 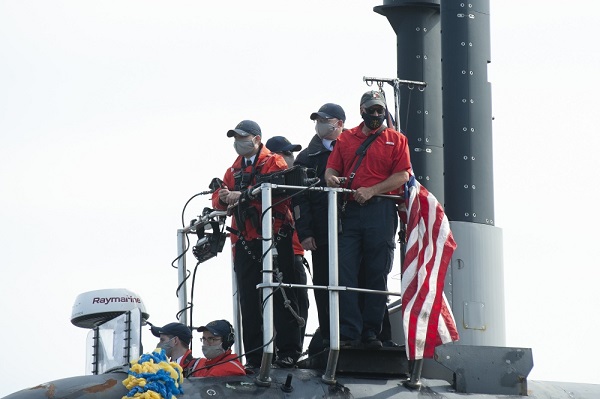 The U.S. Navy submarine USS Indiana completes her maiden deployment and returns home to Submarine Base New London in Groton, Connecticut, on September 25, 2020.

Welcome home, heroes! Thank you for your sacrifices and enjoy the well-deserved time with your families.