From battling COVID-19 to fighting the war on terrorism, the brave men and women of the U.S. Armed Forces are risking their lives to keep us safe. 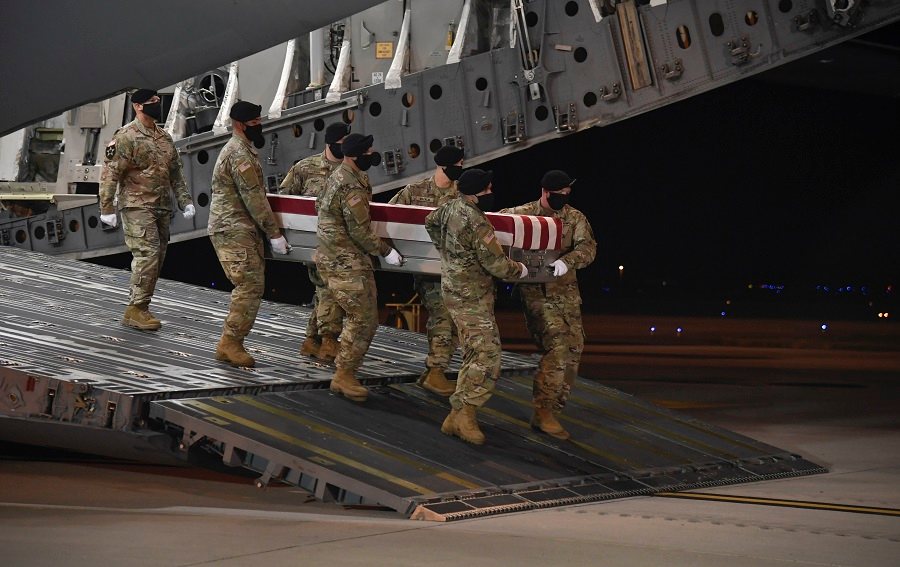 U.S. Army soldiers transfer the remains of Sgt. Bryan "Cooper" Mount during a dignified transfer on July 26, 2020, at Dover Air Force Base in Delaware.

An American warrior who made the ultimate sacrifice during the ongoing war on terrorism has returned to the country he fought for.

Last week, The Stream told you about U.S. Army Sgt. Bryan “Cooper” Mount, who died in a July 22 vehicle accident while on patrol in Syria. The married Utah paratrooper was just 25 years old and is being remembered for his “easy smile and contagious personality.”

On Sunday night, a military plane carrying Sgt. Mount’s remains emerged through the darkness of Dover, Delaware. U.S. Army soldiers then marched the flag-draped casket of their brother in arms back onto American soil.

Please pray for the wife, loved ones, fellow soldiers and friends of Sgt. Bryan “Cooper” Mount.

Brave American troops are still fighting a war in Afghanistan as well.

Stars and Stripes reporter J.P. Lawrence, a U.S. Army veteran, wrote this fascinating story about Afghanistan’s remote eastern Nangarhar province, which has experienced increased attacks since American troops were pulled out of the area in June.

“Now, it’s Taliban. Before, it was [ISIS],” a local Afghan resident told Stars and Stripes. “Our lives are the same as before.”

(5/9) An Afghan militia fighter stands next to two vehicles locals said were destroyed by U.S. airstrikes during the campaign against Islamic State. The cars are in a marketplace that is still abandoned after fierce bombardment. pic.twitter.com/VDItSaBNXy

Please join The Stream in praying for the Afghan people along with the approximately 8,600 U.S. troops still fighting America’s longest war.

The Trump administration has decided to bring home 6,400 American service members stationed in Germany while shifting 5,600 to other countries across Europe, according to Fox News.

The report said some U.S. troops will head to Belgium and others to Italy. The move will leave about 24,000 American military personnel in Germany. The article quotes Republican Sen. Jim Inhofe as saying the troop level adjustments will take “months to plan and years to execute.”

Thousands of American heroes continue to battle the COVID-19 pandemic while also staying ready to defend our country from other threats, as Defense Secretary Mark Esper pointed out on Thursday.

At the ready. Despite COVID, your @DeptofDefense is continually preparing to defend the American people and their interests. pic.twitter.com/UrV1LgvXTE

A perfect example comes from Minnesota, where a National Guard unit that had been busy responding to the pandemic has now shifted back to combat training.

After months of responding to COVID-19, floods and other missions, these @MINationalGuard Soldiers are back to artillery training. "We've had a lot of experiences throughout the year. Finally, getting back on the gun line, it's a really good experience." https://t.co/FHU79pX7hd

This doesn’t mean the Pentagon’s coronavirus response is anywhere close to wrapping up, of course. In Connecticut, the talented men and women of the National Guard have been busy producing over 100,000 COVID-19 test kits.

National Guard soldiers and airmen are still running test sites all over the nation, including “pop up” locations like the one pictured below.

The Cal Guard is conducting COVID-19 tests in Galt tomorrow. The testing will start at 8 a.m. Thursday at Walker Community Park on Orr Road. First come, first serve. There is a 100-test limit.https://t.co/IIP5Q5HX2y#YourActionsSaveLives #SlowtheSpread #KeepingCaliforniaSafe

Thank you to the selfless, valiant men and women of our military for leading our nation’s response to the coronavirus crisis.

A Naval Mobile Construction Battalion is back home in California after an “extended deployment due to the COVID-19 pandemic,” according to the U.S. Navy. That means the sailor pictured below finally got to meet his newborn baby. 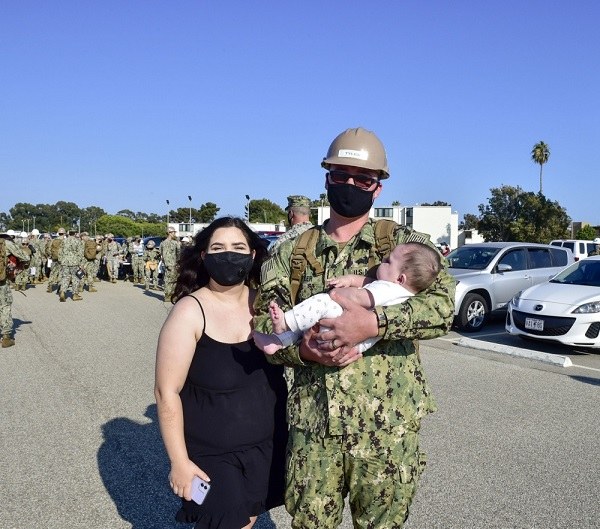 A U.S. Navy sailor reunites with his family at Naval Base Ventura County in Port Hueneme, California, on July 24, 2020.

Welcome home, hero, and congratulations to you and your family!