This Pro-Life, Pro-Israel Church in Germany Was Vandalized by Radical Feminists … But It Won’t Be Stopped 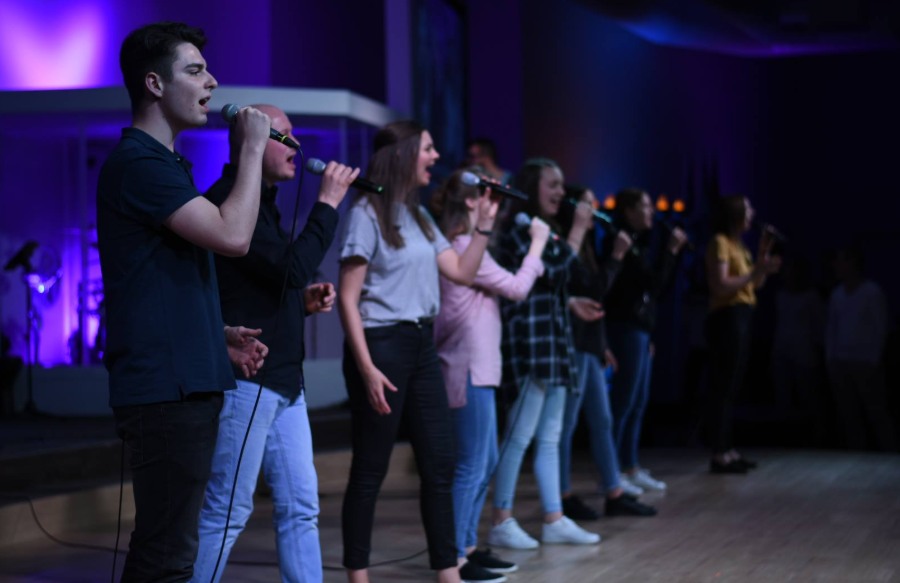 The TOS Youth Band sings a worship song during the 2019 Easter/Passover weekend.

It was only after my article “Jezebel Shows Her Face in Germany” was published that I realized I was closely acquainted with one of the churches that had been vandalized. I have since heard from the pastor of that church, and his story needs to be shouted from the rooftops.

I’m speaking of Jobst Bittner, who together with his wife Charlotte, leads TOS Ministries. This church ministry is based in Tübingen has an international footprint. Jobst and Charlotte both have Master’s degrees from the famed University of Tübingen. Jobst’s degree is in Theology (sitting under Prof. Martin Hengel) and Charlotte’s in Ancient History. And both of them are unashamed of the Gospel and unashamed of the Holy Spirit.

I have had the joy of preaching in their church a number of times. It is one of the freest, most active congregations in the nation.

On January 17, Jobst wrote this to me after reading my article:

On Boxing Day, the night of December 26-27, our church building was smeared with purple paint and there was an arson attack on our church bus, which burned out completely. Thank God no people were injured. The property damage amounts to about 40,000 Euro.

We are grateful we are not standing alone here. There have been numerous expressions of solidarity from both the religious and political side, which have moved and encouraged us greatly.

We wrote in the press release: “We are shocked by this attack, but unfortunately not surprised in view of the increasingly hostile climate against evangelical Christians. In recent months there has been an aggressive threat scenario against TOS church in Tübingen, especially from the left-wing scene”.

In a letter a “left-wing feminist cell” admitted to the attack. In their letter they referred to the “homophobic and reactionary world view” of TOS as one of the reasons for the attack. TOS was chosen because it is representative of Evangelical churches. Well, that is almost an honor… 🙂

We continue to write in our press release: “We will not be intimidated and will not retreat to our little Christian island. Aggression and hatred are overcome by the willingness to be reconciled.”

We have the privilege of holding the Awakening Fire Conference over Easter with 3000 participants … where we will proclaim the message of the cross and prepare for a new decade of the Holy Spirit and the end-time harvest in Europe!

From Tübingen, we released Marches of Life in 16 nations and 65 cities around the world last year, where tens of thousands raised their voices in the streets against antisemitism and for friendship with Israel.

We are honored by the Lord to be allowed to continue to do so!

In short, they are not backing down and they are not intimidated. To the contrary, attacks like this only strengthen their resolve. That is the spirit of TOS.  Just as the middle initial of the ministry name is O, they are known for taking the offensive. (For more details on the attack, see here.)

But it is here that I want to focus on one particular aspect of Jobst and Charlotte’s work. I had noted in my article that the radical feminists who vandalized two church buildings claimed that the anti-abortion March for Life serves as a platform for ‘fundamentalist, anti-trans, homophobic, anti-Semitic, mysoginist [sic], patriarchal and right-wing conservative’ speakers.”

Well, it is beyond ironic that these feminists would bring such a charge against TOS. This ministry is world famous for its pro-Israel, pro-Jewish marches. To repeat Jobst’s words, “From Tübingen, we released Marches of Life in 16 nations and 65 cities around the world last year, where tens of thousands raised their voices in the streets against antisemitism and for friendship with Israel.” (So, there is the March for Life, which stands against abortion, and the Marches of Life, which stands against antisemitism.)

Yes, this call to stand against antisemitism comes from a German pastor and a German congregation. One which the “Feminist Autonomous Cell” brands antisemitic. Talk about spiritual blindness.

Ministering in a City With a Nazi Past

When I interviewed Jobst on the Line of Fire broadcast, he described the history of the city of Tübingen. It was not just famous for its university, but for its Nazi past.

In the interview, Jobst shared with me that many Nazi perpetrators were trained there, since it was an intellectual hotbed of the nation. And he stated, “the people trained there were personally responsible for the deaths of at least 700,000 Jews.” (As far back as 1477, all Jews were expelled from Tübingen.)

And now, out of that same city, led by German Christians who graduated from that same university, there are Marches of Life, standing against antisemitism.

I had the privilege of writing the foreword to Jobst’s landmark book Breaking the Veil of Silence, which was first released in German. It tells the painful story of how many individuals from the generation of the Holocaust failed to tell their children about their participation. This produced a legacy of shame and silence. Only when that veil is lifted, Jobst argues, can healing and restoration come.

It is a jarring, disturbing book, but a book with a message of great hope. And Jobst has described to me the amazing reconciliations that have taken place as older Germans opened up about their past, bringing personal as well as familial healing.

Radical feminists should be shaking in their boots. A Jesus-honoring, Spirit-empowered, fearless ministry like TOS will not be stopped. These feminists may have set a bus on fire. But they only helped fuel the fires of love and determination in the hearts of these precious German believers.

May the message of TOS take Germany by storm, shake Europe, and continue to spread worldwide.

As I have ended many an article before, I’ll say it again here: It’s time!