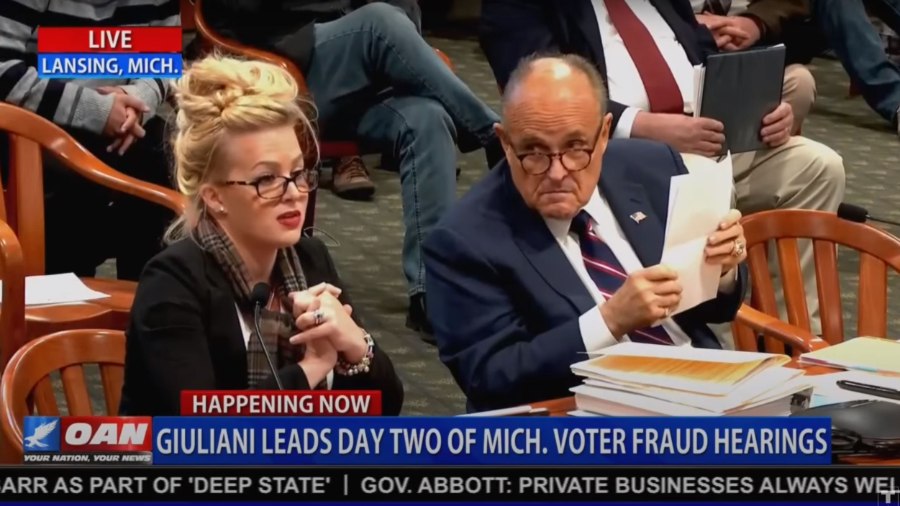 “Give me liberty or give me death” – Patrick Henry

“Come and take it” – Texans at the Battle of Gonzalez

“I don’t give them hell. I tell them the truth and they think it’s hell.” – Harry Truman

Others may have their great and fancy orators, but America’s got Americans. Honest citizens with a pithy way of spitting into the eye of our foes and troubles. Speaking truth to power. Mic dropping the high and mighty.

Last night, in Michigan, we saw such a moment. Her name is Melissa Carone. She is a sworn witness to massive wrong-doing in the election. She was being brow-beaten by a legislator, dedicated not to truth but witness intimidation.

Watch this American citizen with a perfect American moment.

“I know what I saw. And I signed something saying that if I am wrong I can go to prison. Did you?” Come and take THAT.

She speaks for every witness to every single media personality and politician.

Clips of Carone at this and an earlier fraud hearing has gone viral. Seen 9 million times already. Naturally, the Washington Post is running a hit piece on her this morning. Naturally, the blue checks mock her as something out of an old Saturday Night Live sketch. Man, do they hate Americans.

They deem her not credible. Not for what she has to say, but who she is. As if they can explain Biden’s non-credible vote spikes and inconceivable tallies in Detroit and a couple other swing state cities and only those cities. As if all the other witnesses in Michigan are not offering testimony that lines up with Carone.

As if Hollywood actresses wouldn’t be lining up to play Carone in an HBO movie about the election, if the shoe was on the other broken foot.

If you follow me on Twitter (@StreamingAl), you’ve probably picked up what is angering me the most about the snide, slick media’s dismissal of claims of voter fraud. Every time they talk about “baseless” or “unfounded” or “crack-pot” or “desperate,” what they are saying is every single one of the hundreds and hundreds of brave citizens who have come forward are liars.

These average citizens who know — because of the vicious Democrat seek-and-destroy, dox-till-they-drop campaign — that every effort will be made to wreck their lives. Yet, they sign and continue to sign their name to affidavits, under penalty of law, swearing they have seen illegal, inexplicable, dubious and unconscionable election behavior.

Even if you are a Democrat. Even if you’re no Trump supporter. Even if what you are saying matches with what strangers in far away states are saying.

When President Trump spoke yesterday, he wasn’t so much speaking for himself. He was speaking for witnesses like Carone, and truck driver Jesse Morgan, and the riveting Indian-American Hima Kolanagireddy. Experts like Matt Braynard, military cyberwarfare vets like Col. Phillip Waldron, and our own Stream contributor William Briggs. (You can see Dr. Briggs’ analysis of Arizona voting here, in the lawsuit filed last night by Sidney Powell.)

Trump was speaking for every one of the everyday Americans who just wants a fair and honest vote count. Including the tens of millions who know something stinks to high heaven.

My question is “Where is Joe Biden?” Sure, during the campaign he refused to condemn BLM and Antifa for their violent war against Trump supporters, police and America itself. But that’s because he owed them. Part of his election scam was “I’ll make this all go away.”

But where is Joe Biden today for the hundreds and hundreds of witnesses who saw something wrong and came forward to try and right it? Do they not deserve his attention and respect?

Does he not want to show the 74 million (assuming you believe that’s the real count) who voted for Trump that they have his attention and respect?

Biden made a big deal of being the average Joe from Scranton. What about average Jesse the Truck Driver? He helped keep mail rolling through Joe’s old home state during COVID. He was called a hero then. You going to let the media dismiss the hero, ignore him, treat him like a dirty rag?

Then again, maybe I’m asking too much of Biden. After all, he is the candidate who said voters didn’t deserve to know his position on packing the courts. He’s the one who called Trump supporters “chumps.” Who has time to listen to chumps about election fraud when there’s Iranian mullahs, Chinese party officials, and globalist leaders to schmooze?

Today, Joe Biden is making it as stark as the Arizona desert that he has no respect for the American people he’s spent half a century maneuvering to lead.

Then again, perhaps he will give Melissa Carone (and the countless like her) a close listen … if he gets to sniff her hair.