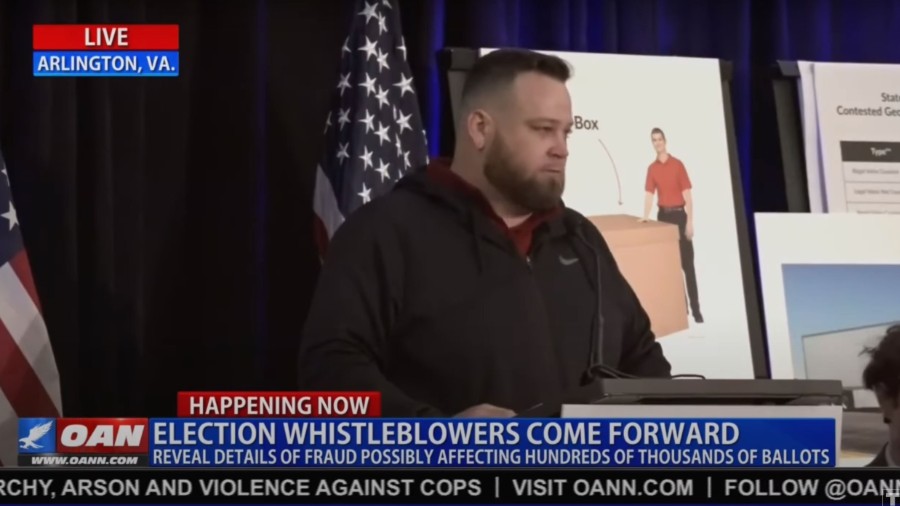 My heart sank Tuesday when I saw the news. “Bill Barr says DOJ found no evidence of widespread election fraud.”

“How hard did they look?” I asked.

Given Hillary, Strzok, Page, James Comey, John Brennan and the whole corrupt, rotten mess of them still walk the streets, I don’t exactly have high hopes for justice. The FBI also had Hunter Biden’s laptop proving Joe Biden Inc.’s financial ties to China for a year, and best anyone can tell they’re using the thing as a coaster.

Also, I well remember Lisa Page’s warning to Peter Strzok as he was set to interview Hillary Clinton in the Clinton email investigation. Basically, she said, “Go easy. She’s likely to be the next President, and she will hold a grudge.”

Today, DOJ investigators are being told by the media that Joe Biden is the next president, Donald Trump won’t be able to stop it, and the old gang will again be taking over. Who is going to stick their neck out to chase down election fraud when from all sides they’re hearing it won’t make a difference?

We’d like to think federal agents are The Untouchables. It’d be nice if that were so. But history since Obama’s election has shown that at least when it comes to politically motivated cases against conservatives or Trump supporters, they’re less Elliot Ness and more Lock Ness Monster. They stick their head out of The Swamp, make a quick show of it, then disappear.

But That’s Not What Barr Said!

Thankfully, as I was stuffing my sorrows with an Italian sub, I remembered the First Law of Snake News: “Anything that has the media hyperventilating over Trump will be proven false, usually within 24 hours.”

So, I picked my heart up off the floor, dropped the sub on my plate, and read what Attorney General William Barr actually, reportedly, said.

Barr’s actual quote … assuming the AP is quoting accurately … is “to date, we have not seen fraud on a scale that could have effected a different outcome in the election.”

William Barr chooses his words with the care a bride chooses her wedding dress.

“To date” — that means investigations are on-going. In fact, DOJ later confirmed this, rejecting the widespread media reporting that DOJ’s look at the election is over-and-done. Victory to Biden. Their statement, as reported by Catherine Herridge:

Some media outlets have incorrectly reported that the Department has concluded its investigation of election fraud and announced an affirmative finding of no fraud in the election. That is not what the Associated Press reported or what the Attorney General stated. The Department will continue to receive and vigorously pursue all specific and credible allegations of fraud as expeditiously as possible.

what the Attorney General stated. The Department will continue to receive and vigorously pursue all specific and credible allegations of fraud as expeditiously as possible.” @ClareHymes22 @CBSNews

Enough Fraud to Change the Election? Not Yet

“fraud on a scale” — that means we have found fraud. In other words, every single news story that speaks of “baseless” allegations is a flat out lie.

“fraud on a scale that could have effected a different outcome in the election.” Think, my friends. What would it take to effect a “different outcome”? This would mean, the results in several states — how many would depend on which states — would have to be overturned. That’s a pretty tall order. At this point. To date.

Or there would have to already be convincing proof of a nationwide fraud effort, be it by Dominion, the Democrats or foreign actors … or some combination … to invalidate the entire election. Again, that’s a pretty tall order to prove in a couple weeks. At this point. To date.

The Evidence Continues to Come In

A “firehose” of evidence — as Sidney Powell says — continues to pour in. Take one example: It’s only yesterday — in other words, after Barr’s interview — that the FBI got hold of the staggering discoveries by Matt Braynard of the Voter Integrity Project.

– The @FBI has proactively and directly requested from me the VIP findings that indicates illegal ballots.

– By Tuesday, we will have delivered to the agency all of our data, including names, addresses, phone numbers, etc.

Said Phillip Kline of the Amistad Project, which is teaming with Braynard: “This data has been used to identify hundreds of thousands of potentially fraudulent ballots in states where we filed litigation.”

Watch Braynard explain some of his findings to Lou Dobbs here.

Braynard told Dobbs he’s not sending the FBI, or governors or legislatures “charts or line graphs or speculation about what may or may not have happened.” He is sending them “hard data.”

The names, addresses and phone numbers, dates of birth and voter records of people who either had ballots cast in their name but didn’t, or did cast ballots they shouldn’t have because they didn’t meet residency requirements or cast ballots in multiple states.

What Braynard found in several key states, including Wisconsin, Georgia and Arizona, is that the number of dubious ballots, the individual voters identified, surpasses the margin of victory.

“Which means, nobody can honestly say for certain that Joe Biden actually won the election, just based on our data alone.”

Braynard mentioned that his raw data has been used for analysis in other states. Take Pennsylvania. Williams College Professor and math expert Steven J. Miller took Braynard’s data there, and contacted a sample of nearly 3,000 Republican voters. Miller, in a sworn affidavit, declares:

“I estimate that the number of ballots that were either requested by someone other than the registered Republican or requested and returned but not counted range from 89,397 to 98,801.”

Also, yesterday — also after Barr’s interview — America met Jesse Morgan, a truck driver subcontracted out to the United States Postal Service. He’s a whistleblower. Not the Adam Schiff kind. The real kind. The kind that puts his life and livelihood on the line by coming forward.

His story is the stuff of old Hollywood movies. Morgan says he transported hundreds of thousands of already filled out ballots from New York to Pennsylvania on October 21st.

Morgan testifies he “saw 24 Gaylords, or large cardboard containers of ballots, loaded into my trailer. These gaylords contained plastic trays — I call them totes, but trays will work — of ballots stacked on top of each other.”

At his second stop, he unhitched as he always does, and went home. Most amazing, when he returned the next day, his trailer had up and vanished. The trailer he’d been driving for 18 months. Gone.

Where’d the truck of ballots go? Phillip Kline, head of the Amistad Project, has a good idea where some of them went. He has another whistleblower who describes trays of ballots — just like the ones described by Morgan — showing up at a counting center in Delaware County, Pennsylvania, near Philadelphia, in the wee hours of November 4, for “a late-night ballot dump.”

Kline says he has evidence indicating the wrong truck was loaded in Bethpage, New York with the dubious ballots, which explains Morgan’s otherwise inexplicable experience.

Again, this is evidence presented yesterday. Evidence Bill Barr and DOJ has not yet had a chance to pursue. Evidence that would demonstrate “fraud on a scale” that would effect “a different outcome of the election.” I pray the DOJ and FBI will seriously investigate these and other emerging evidence, regardless of the upheaval it would bring.

We mentioned The Untouchables earlier. Yet I’m reminded of a quote from another Kevin Costner history-based movie, where he played another lawman fighting against strong tides and a hostile media to uncover the truth about JFK’s assassination.

“Let Justice be done, though the heavens fall.”