The Woke Can’t Admit That They’re Trousered Apes. Instead They Strive to Be Demons 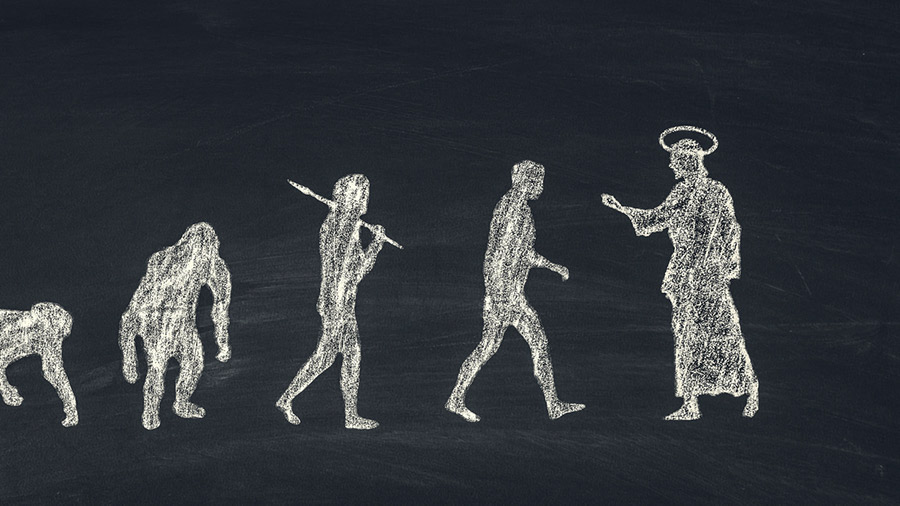 It can happen to anyone who works in the creative field. You have an idea you’re so fond of, you’re driven to build a whole structure around it. C.S. Lewis said the seed for the whole of “The Chronicles of Narnia” was one single, mysterious image: an electric London lamp post shining in the midst of a wintry wood.

Well, this week something similar came to me — namely the headline, “Betty White Didn’t Kill Herself.” It was so daftly absurd, I knew I needed to share it with readers. I am permabanned from Twitter, so wasting it there wasn’t an option. So a column it had to be, and lo and behold, it became one.

It needed some kind of rational argument to justify this one-liner, though. I found myself writing this:

Tell people for a hundred years that they’re just the accidental by-product of 1) chromosomes mutating and 2) ruthless, vicious competition for survival … and eventually they’ll believe you. Not in some consistent way, which would entail them embracing a grim Darwinian pessimism and naturalistic humility. No, they’ll still hold on to just enough of the Christian view of man to tell themselves that they’re unique and precious snowflakes, with numberless “rights.” [emphasis added]

I think Ms. White’s passing goaded me to an insight that goes far beyond a grim Jeffrey Epstein joke. It helped put a finger on the maddening paradox we face when speaking with unbelievers.

A Darwinism of Convenience

On Mondays, Wednesdays, and Fridays, they insist that mankind is merely a trousered beast. He’s just the latest side-effect of utterly random biochemical processes. Somehow those processes fine-tuned the whole universe to make life possible at all, choosing the one arrangement (out of trillions upon trillions) of cosmic, nuclear, gravitational, chemical, and electromagnetic forces where planets could actually form. Then by sheerest blind chance, those same forces just happened to pick the lottery ticket called Earth — the only planet we’ve found so far where advanced life (bigger than microbes) seems even remotely viable.

Next, with far better luck than a blind sniper hitting one particular sparrow on the fly, dead chemicals on a lifeless earth somehow assembled themselves into self-replicating organisms more complex than our best supercomputers. By sheerest accident, those tiny organisms kept making fruitful genetic mistakes, which produced ever-more-advanced versions of themselves — instead of grotesque and non-viable mutants, which is all we ever see in the lab. The ruthless, bloody competition of these various creatures, through an ongoing lucky streak for this universe, eventually yielded brainy apes.

Our Minds Don’t Exist. Process This Thought Using Your Thymus Instead

Somehow the savage struggle to survive among woolly mammoths and saber-toothed tigers weeded out most of our ancestors, except for those whose brains had benefited from still more infinitesimally unlikely mutations, until … voila! A creature existed who could use language, think abstract thoughts, discover mathematics, and make truthful statements about what happened to form the universe 13 billion years ago.

Now if you really believed all that, I’d think you’d feel kind of sad. You’d realize (as men like Albert Camus did) that every human value, achievement, gesture, hope, or prayer was a soap bubble doomed to pop. That each one of your words and deeds, aspirations and efforts, would vanish “like tears in rain,” as the cyborg laments at the end of Blade Runner.

You’d see our human claims to individual dignity and importance as melancholy fantasies, perhaps the unhappy side-effect of some otherwise useful mutation. Perhaps you’d decide that since the survival of the fittest created everything in the living world, and serves as the engine of “progress” from the amoeba to the astronaut, you ought to help it along. You might then become a eugenicist, or social Darwinist, or transhumanist, dedicating yourself to the advancement and improvement of the species.

If you’re more like me, though, and if you believed all the above, you wouldn’t care about “progress.” You’d feel no particular debt to the dead, meaningless universe which had accidentally spawned you — complete with futile drives, delusional hopes, and a useless unscratchable itch for immortality. You might think you’re doing the next generation no favor by generating them, and refuse to do so. You might just climb inside a bottle or a bong.

The one thing I cannot see as in any way a logical response to accepting Darwinist materialism is … what the contemporary left is doing. That is, to pretend that each human being — starting of course with one’s self, and other people like you — is not a trousered ape but a god. Each of us has limitless rights and vast moral claims, and is bound to a strict criterion of distributive justice.

We each have the “right” to education, health care, “respect” from our peers, economic equality, deference to our ethnicity, and even the right to destroy our biological sex, to force our bodies to match what our minds (which remember, do not exist!) tell us about ourselves.

The state should not discourage parents from destroying their healthy unborn children, or constantly frustrating their bodies’ efforts to reproduce. Suddenly, survival of the fittest doesn’t matter anymore. Neither does the birth rate. Sex exists not to grimly and reliably reproduce the species (as Darwin tells us), but as a toy for our fantasies and fun, a playground of infinite variations of polymorphous perversity.

Surely, if a group of chimpanzees or gorillas started acting this way, they’d be driven away or killed. They’d die out quickly, at any rate, to the hoots of the rest of their species, who’d happily fill up their niche in the ecosystem. Animals practice hierarchy, tribalism, rank discrimination, naked aggression, even genocide. Where in Darwin’s universe can we find any warrant for Wokeness?

Nowhere. Every claim of dignity, freedom, autonomy, equality and special value must be shoplifted from Christianity — carefully shorn of the security tags, of course. Secular leftists want the core of Christian ethics of the person, but they refuse to pay for it. They won’t respect the structure of Creation, the person of the Creator, or the moral limits He put on our use of freedom. They want to be special snowflakes whose “gender conflicts” mean more than “this primate is defective and probably won’t breed.” They expect to have their aspirations honored and their dignity affirmed by a godless and soulless universe.

The modern secularist can’t choke down the implications of either Darwinism (man as trousered ape) or the Gospel (man as fallen image of God). Instead they insist on believing in a botched hybrid of both, which I can only call Man As Demon. He demands the perks of Eden, while wallowing in the muck.

Ralph Northam Chops Up Robert E. Lee Just Like an Unborn Black Baby, the Taliban Does a Victory Dance, and Obadiah Still Can’t Get Rid of Karen