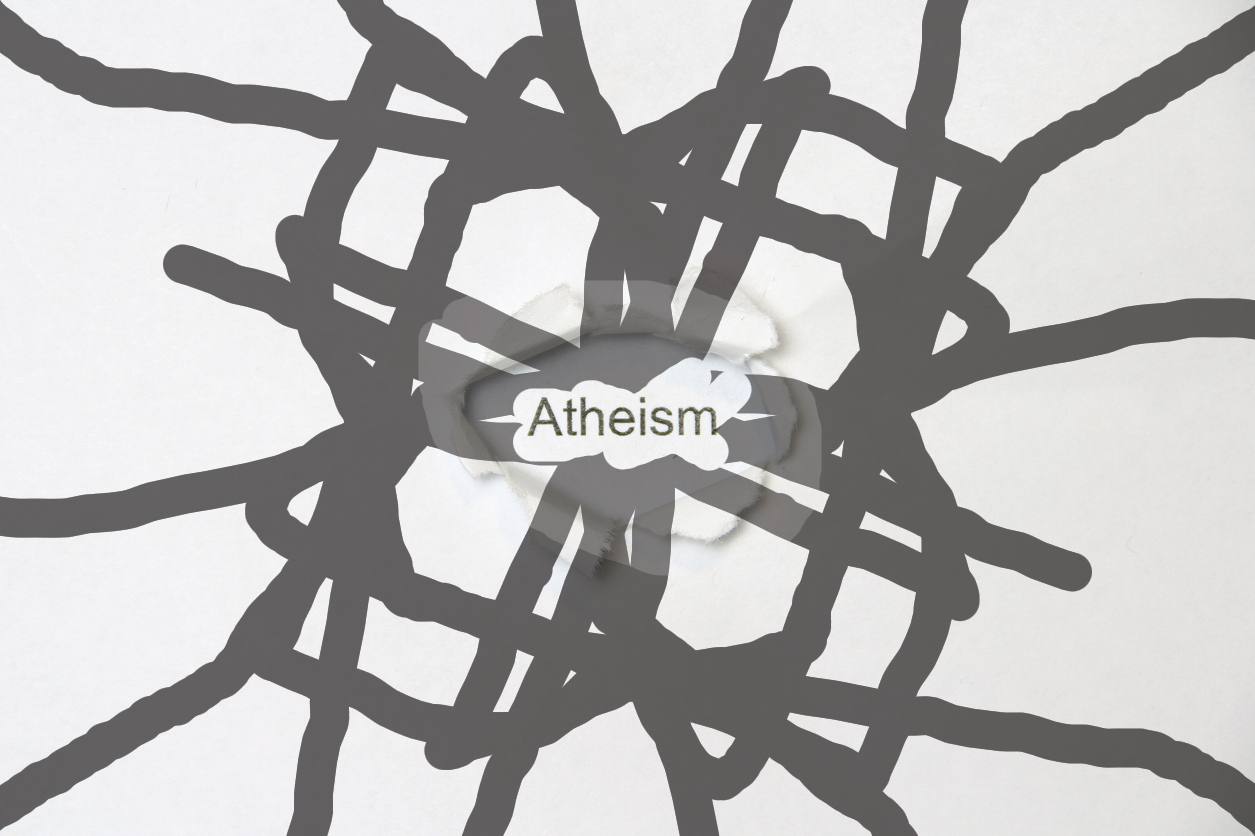 John Zmirak has been trying to get inside the mind of atheists in recent articles here. I wish him luck. A truly committed atheist may wonder whether there’s any mind there to get into. Again, I’m serious: Atheists have some very weird beliefs, and that’s one of them. For many atheist philosophers, mind is an illusion, along with consciousness, free will, ethics, even the human self.

I’m Not Kidding You: This Atheist Philosopher Seriously Thinks We Cannot Think

Take Alex Rosenberg, atheist philosopher at Duke University, and author of The Atheists’ Guide to Reality: Enjoying Life Without Illusions. I count it among many atheists’ books that help my confidence in Christianity. In this book Rosenberg tells us he’s convinced it’s impossible to think about anything. Or more technically, since he’s a professor and we really ought to use his technical language, it’s impossible to think about “stuff.” In this context, “stuff” is literally anything you might think you think about. A child doesn’t think about milk, and you can’t think about Paris. (I’m not saying it makes sense, mind you. I’m saying this is what he says.)

So for example, my water bottle is on my desk, but it’s not “about” my desk. There’s nothing in the water bottle that’s “about” anything at all, in the sense that (we think) our thoughts are “about” stuff. So if clumps of matter can’t be “about” other things, and if your mind is nothing more than the clump of matter residing in your skull, then nothing in your mind can be about anything.

Look, I told you it was weird. He said it, not I. “Our brain navigates us through life very nicely, thank you, without thinking about anything at all. The meanings we think are carried by our thoughts, our words, and our actions are just sand castles we build in the air.”

No Self, No Free Will, No Consciousness, No Right or Wrong

That’s just for starters. Rosenberg thinks you’re deceived if you think you are yourself, because “self” is an illusion, too. There’s no purpose and there’s no design, either, which includes your own purposes, and your own designs.

Atheists love saying, “Atheism isn’t a belief, it’s the lack of belief.” I think that’s a strange belief all on its own, especially for American atheism.

Every atheist I’ve encountered here holds to a specific form of atheism called naturalism or materialism. It’s the idea that nothing exists but the material world, stuff like matter and energy and space and time. Reality (on this view) is one-hundred-percent natural, and it’s all run absolutely by natural laws.

They believe this. It is a belief that they hold. So much for, “It’s not a belief.”

There are other forms of atheism, but this is the only one I run into regularly, and it’s specifically the version that I’m talking about throughout this article.

It’s weird, I know. But don’t think it’s way out on the fringe somewhere, because this is standard atheism. Sam Harris, one of the top-selling “Four Horsemen” of New Atheism, wrote a book explaining how human free will is an illusion. You never actually decide to do anything whatsoever.

Daniel Dennett, philosopher at Tufts University and another member of that gang of four, insists that consciousness is an illusion. Paul Churchland, who held a prestigious chair of philosophy at the University of California, San Diego agrees, as does his philosopher wife Patricia.

Michael Ruse, professor at Florida State University, calls objective right and wrong “illusory … . Morality is just an aid to survival and reproduction.” And Ruse is just as confused as Rosenberg about whether we should think we have the ability to think: “Why should a bunch of atoms have thinking ability? … The point is that there is no scientific answer.”

“No scientific answer,” indeed. Ruse is right, up to a point: There’s no scientific explanation for thought, for free will, for “self,” or for objective morality. None of it. But atheists are all wrong when they go on to say that if there’s no science for it, then it’s not real, or at least we can’t know it’s real.

That’s the view called scientism, It has problems all its own, yet it’s also the reason Rosenberg wrote his book. He claims his words have no meaning, yet still he says, “Look, if I am going to get scientism into your skull I have to use the only tools we’ve got for moving information from one head to another.” The book is a mechanism, a hammer meant to pound on your brain. “This book isn’t conveying statements. It’s rearranging neural circuits, removing inaccurate disinformation and replacing it with accurate information.”

Hammer? That’s my term for it. Is it overstated? I don’t think so; in fact “piledriver” may be a better word for it. Check out the clip linked there. He’s angry. Rude. He whacks that student hard with impressive words and famous names, yet still in the end he’s just as incoherent as the student says he is. Because “getting scientism into your skull” means he’s trying to rearrange your neurons so you agree with what he says about scientism, even though he thinks it’s impossible.

The error he makes there called performative contradiction. Don’t worry, that term isn’t hard to catch onto. Another example would be, “I cannot write a sentence in English.” There’s a contradiction there, obviously, but it’s not in the words. They could be true for many people — my one-year-old grandson, for example. It’s not the words but the act of writing it that’s the problem. To write the sentence is to “perform” a contradiction. You can’t write it without disproving it.

Still there’s something chillingly rational in what they have to say. If you start where they start, with a purely material universe, and if you follow a rational trail of reasoning, and you will surely land where they land. The line of logic takes you to a place bereft of human thought, meaning, purpose, or identity, a place where there is nothing that is human. One strand of atheism calls itself “Humanism,” but that’s a contradiction, too. Naturalistic atheism would rather give up our humanness than believe in a reality that transcends the material world.

Atheists Should Follow Their Logic Where it Leads: Away From Atheism

Atheists could take their humanness seriously again, if they’d choose to do so. They could look back on their trail of logic and say, “Whoops, something went wrong there. I ended up in a place that I know isn’t real. My logic wasn’t wrong; that’s not the problem. It must be that I started out from the wrong place, thinking the universe is purely natural. I see now it doesn’t look like that could have been true after all.”

They could make that correction. Some do. I’ll make that appeal now to atheists who may be reading here: Will you re-think this, please? Maybe you think it’s strange to believe in God, but isn’t even stranger to deny everything that’s human about yourself?

To believers in God, I’ll simply say, if some atheist says your believing in Christ is a bit strange, just smile confidently. Be gracious. And remember that compared to them, you have nothing to worry about.