The Promised Land, Part 1: I’ve Been Working With Refugees in Greece. It’s Not What They Were Told It Would Be 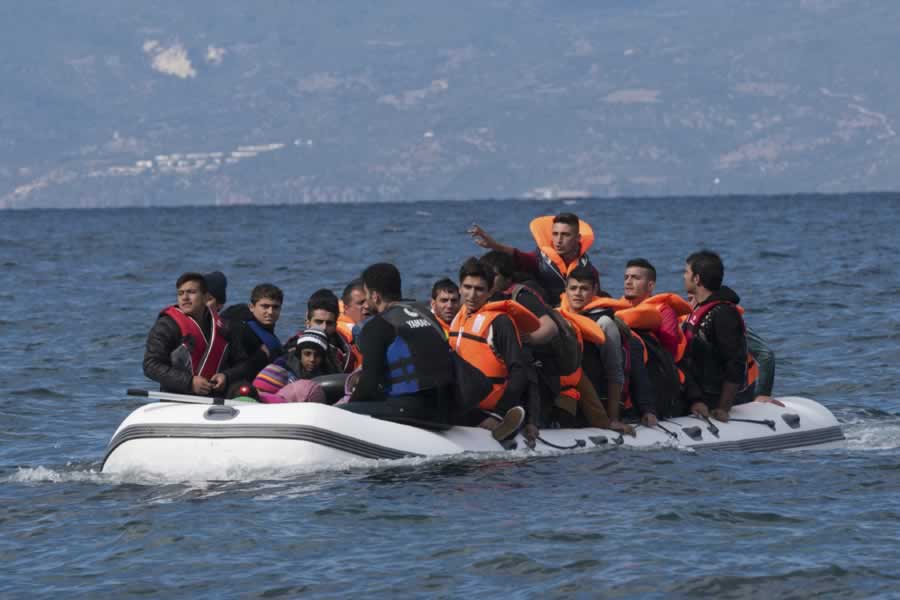 In this image taken October 25, 2015, an inflatable boat filled with refugees and other migrants approaches the north coast of the Greek island of Lesbos. Turkey is visible in the background.

I’m just back from spending more than a year working with refugees in Greece. So I noticed when the Greek government recently announced a plan to replace the refugee camps in the Aegean with detention centers.

They say they’re doing this to try to end the humanitarian crisis of the overcrowded and poorly-regulated camps. However, they give another reason, as well: to remove the motivation for migrants to come to their country.

That’s interesting. Would refugees really be coming to Greece if they had better options? During my time in Greece, I saw that the answer to that question is surprising.

The refugee crisis is often simplistically portrayed in the news as innocent families fleeing homes laid waste by war and terror in the Middle East. There’s some truth to this. After all, the current influx began with the destruction of Syria and Iraq by ISIS in 2015.

But other commentators (including The Stream’s Jason Jones and John Zmirak), have pointed out that the term “refugee” refers to someone fleeing immediate danger into the first safe country bordering their home country. Greece does not directly border any war-torn nation. Thus, many so-called “refugees” are really just economic migrants.

I heard it from immigrants in Greece themselves: a large portion of so-called “refugees” aren’t really refugees at all.

Furthermore, some migrants never even faced war or direct persecution to begin with, and could return to their home countries whenever they pleased, without risk to their life. Many migrants have simply taken advantage of the pathways created by the influx in 2015-2016. This is especially true of immigrants from Iran, who make up a large portion of current asylum-seekers.

A Life of Suffering

However, this assertion strikes an odd chord for anyone who has witnessed the life of a migrant in Greece. The suffering is often truly intense, not something one would imagine taking on lightly, for bland-sounding “economic motives.”

Some migrants lose their lives trying to cross national borders. Many face abuse along the way. They are passed along a chain of smugglers and criminals who exploit them in any way possible. Many who make it to Greece end up living in hopeless and deplorable conditions. The lucky ones are stuck in camps waiting on the molasses-speed Greek asylum process. The unlucky ones live on the streets, in tents, or in abandoned buildings in the inner city. Many end up in prostitution, or selling drugs.

If these people aren’t really refugees, why do they come?

While I was working in the Moria refugee camp on the island of Lesvos in August, a young resident from Afghanistan shared this sentiment with me: If the European officials could live the life of a migrant, and experience the suffering they face, they would give all of them asylum — regardless of whether they were technically “refugees” or not.

He may have been right. It’s easy to sit in safety and affluence and decide who should have the privilege of immigration. But many of our logical arguments falter in the face of real human hopes and real human despair.

On the other hand, the close-up view doesn’t always yield the fullest picture.

In September, I met a man who had lived for several years in the war-torn nation of Libya. He told me that hundreds of bodies wash up on the Libyan shore, the result of failed attempts to cross the Mediterranean to Europe in fishing boats. And he was angry. He wasn’t angry at European countries for trying to stop the flow of immigrants, but because their leniency encourages people to come illegally and try to seek asylum. This lures migrants into a world of danger and suffering — and often death — along the way.

And yet, the question remains: Why would these people go through hell if they didn’t really need to?

The answer is fairly simple: they were lied to.

The Lie They Tell

A large part of the problem is the Muslim culture of Honor and Shame. This is the answer that I received from refugees and migrants with a deep understanding of their own communities, and it’s what I witnessed myself.

The idea of preserving honor and avoiding shame runs far deeper in Muslim culture than it does in the West. That creates a problem. These people left their home countries with a dream: immigrate to Europe, the Promised Land, and find a life better than anyone at home. To tell people back home of their current predicament would be tantamount to admitting failure. It would be Shame.

On the other hand, it’s not that hard to make your life in Greece as a refugee look good, if you lie just a little.

Sure, the soup-kitchen food is mostly bad, but you get it for free. Just tell them that part. Nobody back home can taste it.

Lucky asylum-seekers get a small stipend from the government. It’s not enough even to get by on, but the Euro is much stronger than the Iranian Rial, so that amount of money would make you well-off in Iran. If your friends and family back home don’t bother to google the prices in Greece, it sounds like you’re living the high life.

To tell people back home of their current predicament would be tantamount to admitting failure. It would be Shame.

There are public beaches in Athens. Even the Parthenon is open to the public for free a few days of the year. Take a picture there, and post it on social media. Nobody has to know where you’re sleeping.

The freedoms of Europe and the West are certainly enticing. Alcohol. Sexual liberation. Everyone in Iran has seen it on TV, of course. A young Afghan friend of mine, whom I’ll call Zia, mentioned an acquaintance of his who shared a picture he’d snapped of a Greek woman sunbathing in a swimsuit. He captioned the photo with an explanation that Greece was full of naked women, and you could hit on them whenever you wanted.

To certain young men in a country where kissing in public is a harshly punishable offense, that might sound pretty enticing. Of course, hitting on women is really not a priority for a penniless, beaten-down illegal immigrant. But you’re never going to hear that from your friend in Greece.

The result of all this is that many people back home in the Middle East have no idea of the poverty and danger that their family and friends are facing in Greece. From the outside, it looks almost like a success story. Sure, there are stories of suffering in the news. But surely it’s not so bad as all that? After all, the personal reports sound much more optimistic…

So they come, too. And once again, they cannot face the shame of failure. To report their degrading circumstances would be shameful. To return home with their tail between their legs would be even worse. And so the cycle is perpetuated.

“Be Prepared to Cry”

I remember a phone call my friend Zia received. It was from his uncle, who was living in Iran. He wanted to know about the situation in Greece, and if Zia advised the family to follow after him.

Zia, a recent convert to Christianity (unbeknownst to his family) and an exceptionally frank young man by nature, answered honestly and advised him to stay home. But as he spoke, warning him of the grim, inhuman conditions and the dismal prospects of continuing into Europe, his uncle grew angry. It turns out he had heard a much more positive report from other relatives and acquaintances in Greece.

“I’ll bet you’re enjoying living it up in Europe, aren’t you?” he asked. “Don’t want your family to come and put a damper on your fun?”

No matter how much Zia protested, his uncle wouldn’t believe him. Eventually, Zia handed the phone to another friend of ours, Mamoud.

Mamoud had converted to Christianity in Afghanistan years ago — he was baptized in a river just outside the capital city Kabul — and afterwards made his way to Greece. He is a solemn and genuine person, and had no interest in painting a false picture.

“Come to Greece if you want,” he told Zia’s uncle. “But if you do, be prepared to cry.”

Then he clarified: he did not mean cry in a figurative sense. If you come to Greece, you will shed tears.

Most people are not like Zia and Mamoud. If Zia’s uncle was unwilling to believe Zia, what would someone without an honest voice in their ear believe? It’s no wonder the flood keeps coming.

There is a deeper cause of the crisis, however — and a deeper lie — which I’ll discuss in Part 2.

“Peter Rowden” is a pseudonym for a friend of The Stream who has asked that his name not be revealed in view of his future occupation. All names of immigrants are changed to protect privacy. Phrases in quotes are paraphrases.