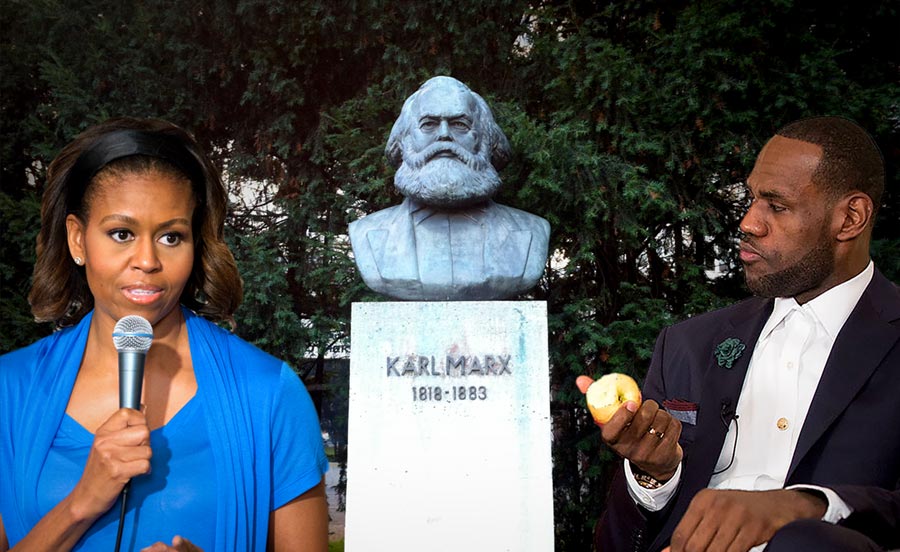 The “Far Right,” those bad puppies, have been calling proponents of Critical Race Theory “Marxists.” Is that true? If it is, does it matter? Or maybe these ones are nice Marxists?

Let us begin by defining that the term. Marxism is a political ideology rising from the teachings of Karl Marx and his associate, Friedrich Engels. In theory, both men were atheists or “dialectical materialists,” though some scholars are startled by what might be called Marx’s Satanic Verses, poems he wrote as a young man about destruction of the world, and his fascination with selling one’s soul to the devil. Marxism can be called a “religion” in the broad sense, an “ultimate concern” as Paul Tillich put it. (Though I couldn’t talk Rodney Stark into buying that definition.)

So what was Marx’s “ultimate concern?” “Raise the poor?” Don’t be silly. Marx seldom showed much practical concern for the poor. He formulated a theory of history according to which society naturally evolved from “primitive communism” to slavery, feudalism, capitalism, socialism, and ultimately communism, at which point the State would melt away. And communism, Marx and Engels said, abolishes all morality, religion, and eternal truth. It’s just science.

Only things didn’t unfold that way. Primitive communism probably seldom existed. One finds, in many simple societies, intense forms of the exploitation and cruelty that define the nastiest civilizations.

The New Form of Marxism — A More Ruthless Ruling Class

Revolution did not break out in advanced nations like America and Germany where Marx predicted, but rather in war-torn Russia, early in its industrialization. Bolshevism then spread by conquest, much like Islam, with a book in one hand and a sword in the other. A new form of Marxism enveloped a more agricultural China. It wasn’t the “working class,” chimney sweeps, and factory hands, who led the revolution, it was mostly teachers and students. (Marx himself was an eternal student.) And rather than being sparked by the inevitable laws of history, party agitators had to preach, terrorize, shoot people, and lay thousands of miles of barbed wire to make the revolution happen. Then rather than fading away, government flayed out like Jabba the Hutt at an all-you-can-eat pizza joint. The pigs not only stood on two fat legs, as in George Orwell’s Animal Farm, they created a secret police and out-tyrannized the tsars and emperors. The Party became a new and more ruthless ruling class.

So should Marxism be defined by theory, or by body count? Some say communism isn’t real Marxism, because Lenin, Stalin, and Mao didn’t follow Marx’s play book very closely.

And now some folks say the same about Critical Race Theorists. “This isn’t real Marxism!” The Woke focus not on class, as Marx did, but on race, gender, “ableism,” and other new social fault lines. Some say “classical Marxists” and these heretics don’t even get along.

Neither do jackals and hyenas, but that doesn’t mean they’re not related. If you focus on ideas, there never was a real Marxism, because Marx’s theory was too daft to apply in the real world. It was only clever enough to stir up intellectuals (20% of Occupy Wall Street participants in New York worked in education). “Justifying perfidy and murder for the public benefit,” Edmund Burke observed during the French Revolution, “public benefit soon became the pretext, and perfidy and murder the end.” Tyrants taught to despise the moral law, what C.S. Lewis called the “Tao,” do not quickly let loose of power.

But I see classical communists and CRT ideologues as both Marxist in spirit. The bearded radical’s paternity of both can be seen in six traits that they share:

2. A moral fig leaf to hide that hunger. Marxist morality borrows a pretense of concern for those on the margins from Christ. Paradoxically, Marx and Engels also claimed to “abolish all morality.” In practice, Marxists created three moral systems, by which they (a) criticized “oppressors;” (b) nagged peasants into working hard, not spitting, wearing their masks, or whatever the cause of the day happened to be; and (c) settled their own consciences, usually by “the end justifies the means.” But a fig leaf of threadbare morality is all Marx issued his followers, in place of the rich heritage of moral truth found, say, in Moses, Confucius, or Aristotle, let alone Jesus of Nazareth.

3. All three moralities are collective, not individual. What matters is to which group you belong: cop or thief, Russian or Jew, landlord or peasant, male or female, White, Black, Hispanic, or Asian. Your category is your fate, to a large extent, conferring virtue or guilt. (Though zealous obedience to party leaders can buy you moral offsets.)

4.  Marxists are social dualists. That is, they take an “Us vs. Them” approach to society. Alexander Solzhenitsyn was an adult before he learned that the line between good and evil runs through every heart.

5. Marxists claim to believe that because society was created by their enemies, violence is justified (and maybe necessary) to make changes. Burning, beating, canceling, “struggle sessions,” and forcing your victim to confess his guilt publicly, are holy communion for this cult. Forgiveness comes through the shedding of blood, or at least reputation and goods, only the blood or goods to be shed are not one’s own. (Which is why we know that alleged injustices are only an excuse to bully.)

6. Scapegoating is an important theme. One terrorizes the masses by first picking on some small group of sinners. When the richest 1% is cowed (as it obviously is, now), go after free-thinking professors in the Humanities Departments (if you can find any), Jews (of course!), and most of all, the police. Like other lynch mobs, Marxists gain solidarity and power by terrorizing a class of enemies that stand out in the crowd.

Just as oppression of women in Islam began with Mohammed, so both forms of Marxism flow from the character of Karl Marx.

Why Oppose This Marxism?

So why oppose this movement?

Communism, you say, led to the deaths of 100 million innocent people. But a number is never as meaningful as a face. This history became more real to me in the 1980s, when I visited the home of a women in north-central China with a tapestry of the Last Supper hanging on her wall, who was shaking and almost too frightened to leave her home.

Fear is rising in American cities, too. Criminals, if they are of the proper color, are part of the protected identity group. This is nothing new: the Soviets often put criminals over political prisoners in the Gulag. If the murder rate skyrockets, who cares? “You have to break eggs to make an omelet.”

And Then There Are the Lies

But what bothers me even more are the lies. We watch Lebron James and Michelle Obama whine about how oppressed they are, scapegoating blue collar police officers to establish their own power-enhancing victimhood. But Michelle Obama must know that she is telling falsehoods when she worries that her daughters will be killed by the police. On average, a white male in America is 8-9 times more likely to die of police action than a black female. And that almost never happens, unless you are violently wielding a gun or a chain saw.)

And the belief that without racism, all cultures would be equal in every respect is absurd. Cultures include foods, habits, music, family structure, and attitudes about exercise and education. Since we live differently, as individuals and as groups, outcomes are bound to differ. Cuisine alone shapes our bodies and determine life-expectancy. Fear may seem to level things for a while. But then it produces new and greater forms of oppression. “Marxist” BLM co-founder Patrisse Khan-Cullors bought four homes, but Chairman Mao owned a vast nation. Marxism not only produces constant acrimony, but forces us to tell silly lies about the human condition.

I have met nice Marxists, but never one who read and believed Karl Marx.