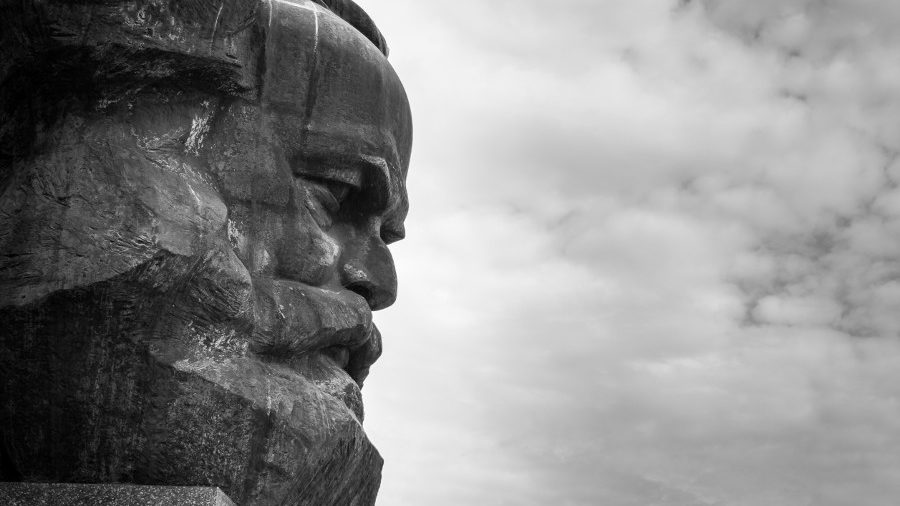 If ever the forces of darkness revived a zombie philosophy, it must have been Marxism. Most of us read in school about the Gulag, the Killing Fields of Cambodia, and China’s Cultural Revolution, when school children threw teachers off balconies. I’ve met some of those teachers’ husbands. Some of us have met those imprisoned, starved, bereft of loved ones, or “tortured for Christ,” as the title of pastor Richard Wurmbrand’s famous book described his own experience in the tyrant Nicolae Ceaușescu’s Romania. Beauty, too, was tortured. Nations were imprisoned. A pall of grey fell over a third of the planet.

And then it seemed to fall apart in a few weeks, as the Berlin Wall came down in 1989.

Ghosts Are Hard to Kill

But Marx and Engels called communism “a specter haunting Europe,” and ghosts are hard to kill. That specter has now returned from the underworld. Inspired by Marx, Howard Zinn wrote A Peoples’ History of the United States, a paean of hatred for his homeland, and got it into many schools.

His friend Larry Aaronson taught Zinn’s Americanized Marxism at the high school Matt Damon attended, a few minutes’ walk from Harvard University. Damon’s character in Good Will Hunting says Zinn’s book will “knock you on your ass.” The Boston Bombers, who also hated America and knocked lots of people on their bottoms, were Aaronson’s neighbors. They’d been students at the school where he bragged about an upsurge in neo-Marxist activism during his tenure.

The Marxism of Critical Theory, and of the mobs who tore down statues and attacked police stations throughout the most recent “Summer of Love,” was unorthodox. It was like the reanimated “unman” in C.S. Lewis’ novel Perelandra, a possessed zombie with body parts sticking out at right angles, shambling through the underworld, seeking what he may destroy.

Why, if Marxism was merely a clever economic theory, are its adherents so consistently nasty?

Why is this undead theory so hard to kill? Those of us who watched the Berlin Wall taken apart for Christmas novelties thought we were watching a stake driven through its heart. Yet here the thing is again, stumbling through campuses, lighting Molotov cocktails, shrieking at the biology of creation itself: that God created male and female, and the two should be as one. (That’s the problem in the inner city, BLM tells us: too many doting fathers!)

Richard Wurmbrand offered a radical theory to explain Karl Marx. Perhaps he was not an atheist at all. Perhaps his true master was the devil!

You smile ruefully and shake your head. I understand.

But Wurmbrand is not an easy man to dismiss. An intellectual of wide reading and experience, he was so skilled at “thinking outside the box,” he wound up trapped within them. As a Jewish convert to Christianity, he was imprisoned for standing up to the cruel communist rulers of Romania. Despite the tortures he underwent, his works were not vengeful or self-pitying, but full of sympathy, insight, and balance:

The murderer of my family has been converted in my house. I have brought to Christ some of my communist jailors. I know what love towards enemies means. But how will I love an enemy if I don’t love from all my heart my own country and nation?

Is Marx Really From Satan?

Is Marx really from Satan? The case is partly circumstantial. Begin with the man’s personality:

Bakunin, who was for a time one of Marx’s most intimate friends, wrote, ‘One has to worship Marx in order to be loved by him. One has at least to fear him in order to be tolerated by him.’

Marx quarreled with everyone with whom he associated … unless he succeeded in dominating them completely.

It is pride, not Marx’s economic theories, that is the true link joining communist tyrants like Lenin, Stalin, Mao, Pol Pott, Castro, and the Kim crime family, to their ideological stepfather.

Further circumstantial evidence comes from the impact of Marx’s life. One hundred million innocent people have been killed by the man’s followers. (So far!) Thousands of years of Chinese culture were trashed by the Red Guards. Whole nations were enveloped in barbed wire.

But Wurmbrand also offered more direct evidence. It includes a strange (yet brilliant) play Marx wrote as a student at the University of Berlin, after he had abandoned the faith of his childhood. Are such writings a “smoking gun”? Whether Marx’s words smell of hell or not, let those who would solve this riddle, consider:

Yet I have power within my youthful arms
To clench and crush you with tempestuous force,
While for us both the abyss yawns in darkness.
You will sink down and I shall follow laughing,
Whispering in your ears,
‘Descend, come with me, friend.’

The Spirit of the Marxist Movement

Time correspondent David Aikman wrote a fascinating doctoral thesis at the University of Washington on “Atheism in the Marxist Tradition.” (Guided by Donald Treadgold, head of the Department of History, who later guided my BA thesis on Marxism and the Russian and Chinese languages.) Aikman could have dismissed Wurmbrand’s theory. He didn’t. Rather, he wrote of Marx’s hostile, life-long “obsession” with religion, relishing theological figures of speech “the more blasphemous, the better.”

Marx’s blasphemy and his fulminations against ‘heaven’ or ‘the heavens’ are not tangential to his mature economic and political writings but specifically central to them.

They were entitled ‘Savage Songs,’ and savagery is a characteristic note of his verse, together with intense pessimism about the human condition, hatred, a fascination with corruption and violence, suicide pacts and pacts with the devil.

Admittedly, tales about Faust, who sold his soul to the devil, and Prometheus, who defied Zeus in the face of torture, were popular in Marx’s youth.  They delighted him.  One might say he borrowed those stories to express his own defiance of the political ‘powers that be,’ as rhetorical figures of speech.  If so, it is odd that he entered into the part so whole-hearted, expressing his hatred for God decades after he claimed to be an atheist.

In the end, perhaps, it matters less what Marx thought of the devil than how we should defend against the spirit his movement still displays. The man’s love of power, intolerance of dissent, hatred of God, and scapegoating of those in authority, have all been transmitted to his disciples more surely than mere economic theories. Like a specter, it defines the mania haunting American campuses and “autonomous zones” to this day.

We Wrestle Not Against Flesh and Blood

Christians have known all along that we “wrestle not against flesh and blood.” So back into the trenches, friends, and let us combat the ghost that haunts us again. But perhaps (I remind myself), we should “move in the opposite spirit,” as Richard Wurmbrand did to those who hated him.

Let us seek that “perfect love that casts out fear” (and demons). Let us love our country, our civilization, and the Gospel which gave life to both. But let us also look into the haunted eyes of our neighbors, and seek to follow Jesus by setting them free, too.