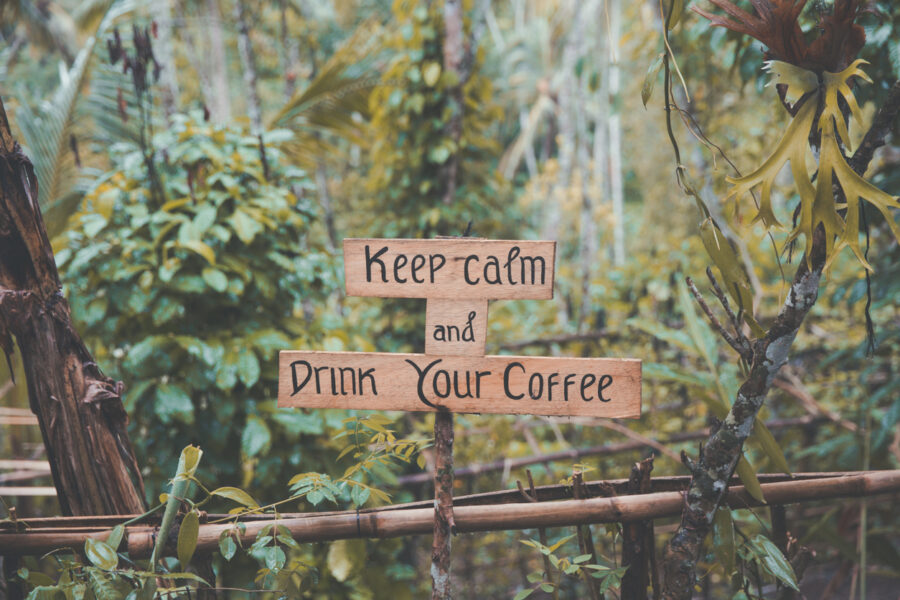 Your Morning Brew is ready, with a side of bananas.

On Wednesday, reporters asked Biden what’s he going to do if Americans are trapped in Afghanistan after the August 31 deadline.

The White House cut off the sound as Biden appeared to ignore the question.

A small thing in the scheme of things. But so symbolic of this administration’s disconnect from reality.

Speaking of the White House media operation, one of the most empathetic — and coolest — articles we’ve posted in a while comes to us from David Marshall. It looks at Press Secretary Jen Psaki in light of Augustine … who (figuratively) stood where Psaki now stands. Check out “Bum or Liar? Jen Psaki’s Search for Happiness.”

Jen Psaki Says the U.S. Does Not Negotiate With Terrorists

The bad news: In her mind, MAGA people are terrorists. The Taliban are just some hairy dudes we rely on to help get Americans safely to the airport. Like Uber, only with guns and American Blackhawk helicopters.

Tweets Can Say a Thousand Words, Video Can Leave You Speechless

Thousands upon thousands of Afghans, some of whom might well be terrorists, are coming to America, thanks to the Biden Administration. (In fact, AOC thinks the U.S. should take 200,000 Afghan refugees. At least.)

But on Tuesday night, Donald Trump dropped a video ad that is among the most harrowing and powerful political ads of all time. If you’ve seen it, you know what I’m talking about. If you haven’t, take 90 seconds.

All I can say after that is, “God, please protect and deliver this nation.”

What to Do? Former Biden Pal Sen. Lindsey Graham Calls for Biden’s Impeachment

Sure, sure. Lindsey Graham is all hat, no cattle. But it does mean something when the South Carolina Senator calls for Joe Biden’s Impeachment over Afghanistan, as Graham did Tuesday night. Graham and Biden were super tight during their Senate days.

Graham flat out told Sean Hannity, “I think he should be impeached. I think this (Afghanistan) is the most dishonorable thing a Commander-in-Chief has done, maybe in modern times.”

He says Biden has signed a “death warrant” for the thousands of Afghans who helped us, which will make it “harder to fight future wars. Who’s going to help us in the future after we abandoned our friends in Afghanistan who fought bravely?” We now face greater danger at home, too.

If you believe we’ve left Afghanistan and we’ve ended the war between the U.S. and radical Islam, you’re a fool. They’re coming after us and Joe Biden has left us naked and blind in Afghanistan.

The million dollar question, Senator, is: “So what are you going to actually do about it?”

And on that subject, Stream contributor Nolan Lewallen is back with “The Impeachment in the Room.”

The Arizona Audit draft report was supposed to reach the State Senate Monday. Parts did, according to Senate President Karen Fann. However, the full draft was not able to be delivered and laid out because two key members of the audit team have been down with COVID.

Meanwhile, there may be big movement in Pennsylvania. After being blamed for stonewalling any real action in Pennsylvania, State Senate president pro tempore Jake Corman is now committing to a “thorough forensic audit of recent elections — including the use of our subpoena powers.”

Corman says lawmakers will seek voting records, ballots and machines. And will use subpoenas to get them.

According to the Philadelphia Inquirer, the Pennsylvania Senate will open hearings this week.

Oregon = Tyranny. Governor Orders Masks on Everyone Outside, Regardless of Vaxx Status

Breaking news: Oregon’s Gov. Kate Brown has issued a mandate requiring all residents to wear muzzles indoors and out because overeating leads to obesity, which not only is a contributing factor in COVID deaths, but kills off countless people each year.

She didn’t? Well, why not? After all she did just order her subjects — I mean, citizens of Oregon — to wear masks outside regardless of vax status when social distancing isn’t possible.  Or you are partying with Nancy Pelosi or Barack Obama or rocking out at a show sponsored by CNN.

Okay, that last line was a joke. But what isn’t a joke? Brown’s mandate exempts the homeless population.

Science? None of this outdoor mandate stuff is. In May, a New York Times investigation concluded that the outdoor transmission rate of COVID is less than 1%. That the CDC figure of 10%, in the words of a virologist quoted in the article, “seems to be a huge exaggeration.”

New Orleans Saints fans won’t go marching in. The team mandated that those attending games had to prove they were vaccinated or tested. Fans were so upset, Saints ticket sales plummeted and seats for Monday night’s pre-season game went for less than a dollar.

Should we be surprised? You been to New Orleans? Does healthy living really seem like something high on their list of priorities?

You ever walk Bourbon Street in August? The germs, bugs and bad juju make those Wuhan viruses look like vitamin pills. The place is so muggy it’s hard to imagine a virus from out of town having the energy to cause any trouble. “Yeah, I’d love to infect you, pal. But I really need to find some air conditioning. And maybe a beignet.”

Just wow. John Zmirak’s beautiful “The Stumbling of Our Country Recalls Us to the Cross.”

Our Nancy Flory talks to “40 Days For Life” Founder Shawn Carney about his new book “What to Say When: A Pro-Life Guide for Talking About Abortion”.

Finally, The Stream is psyched to now be posting episodes of LIFE Today Live with Randy Robison. (And I’m not saying that because Randy’s office is across from mine.) His new episode “Wake Up! — Noelle Mering.” just got posted.