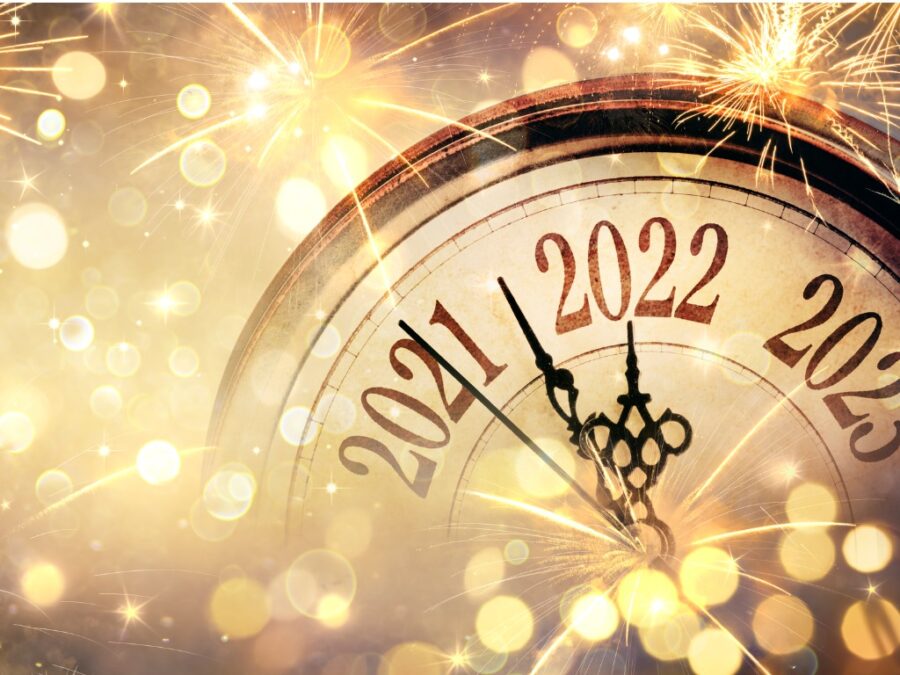 Wow. We’ve made it to the end of the year! Let’s trade that Brew for some bubbly!

And a toast that 2022 will bring love and blessing to you and liberty and bounty for our nation.

A Prayer That the Nation Gets Itself on the Right Track

Before we toot the horns, watch the crystal ball drop in Times Square and join Ol’ Blue Eyes singing “New York, New York,” can we offer a prayer for our nation?

2021 was, in so many ways, a wretched year. COVID claimed hundreds of thousands of more lives, and our government stole many of our freedoms. Dissent was called domestic terrorism, and rightful conviction the 2020 election was stolen was called insurrection. Our enemies are emboldened to the point China is taking aim at Taiwan, Russia is on the move against Ukraine, and Iran is on the verge of a nuclear weapon.

And our friends? Joe Biden promised to right our international relationships. Can you think of an ally who isn’t mad at us? Who still trusts us? Be it over the disastrous withdrawal in Afghanistan, or letting China run wild, or blowing up France’s sub deal with Australia, or canceling the Keystone Pipeline.

Even Canada’s mad at us. Canada!

Biden also promised he was going to return “normal” back to America. Does anything feel normal to you? Well, normal if you stepped out of a Carter-era time machine. Inflation’s skyrocketing, the economy’s dragging, Communism is spreading, our enemies are laughing in our faces, our big cities are crime-infested hellholes. All we’re missing is bellbottoms and “Whip Inflation Now” buttons.

The good news is we know the true Conductor. One Who — if we turn to Him —  will not let us derail or plunge into the ravine. If we accept His guidance, He will lift this train and place it back on the tracks.

One cannot summarize Joe Biden’s first year in office better than this meme.

But for all his failures and gaffes, one can argue the biggest disappointment in Joe Biden’s first term has been his failure to deliver on his promise to unify the country. No. Delete that. His wholehearted effort to demonize, even criminalize, the 75,000,000 who did not vote for him. For that matter, those who may well have voted for him, but simply didn’t like what their schools were teaching their children.

He unleashed the Department of Justice counter-terrorism unit on parents. He unleashed the Feds on unfriendly journalists. He’s let languish in solitary confinement for almost a year people whose only crime was walking through open doors at the U.S. Capitol. He’s stayed silent as his partners at Big Tech silenced conservative voices by the millions. He’s combed the military for “extremists” as China fired hypersonic missiles over our heads.

Sure, Trump fired off mean tweets when attacked, but can you think of one instance where Biden has shown grace for the average Trump voter? Understanding for their concerns over the election? Stood up for those canceled by Silicon Valley? Heck, he even mocked the average American, suggesting they (you) don’t even know what a “supply chain” is.

As we prepare to put 2021 in the trash bin — and hopefully not the recycle bin — I’m left with questions:

Who is the “they” that Biden says won’t let him ask questions?

Why do we know more about the Dad who told Biden “Let’s Go Brandon” than we do the high-and-mighty men serviced by the girls Ghislaine Maxwell trafficked?

If Joe Biden telling himself to bleep off during a worldwide broadcast wasn’t enough to invoke the 25th Amendment, what is it going to take?

What’s it going to take for Joe and Jill to acknowledge their 7th grandchild?

Who bought Hunter’s paintings? Did the FBI sit on Hunter’s laptop hoping it would hatch?

How much does Jimmy Carter love Joe Biden?

How much does cable news and late night TV miss Donald Trump?

Why hasn’t anyone been fired from the White House besides the dog Major? (Yes, I’ve asked that before, but it remains unanswered.)

Why isn’t it bigger news that CNN staffers are more a danger to children than COVID?

And finally … will you please, oh, please have yourself a safe and festive time of it tonight? And will you join us again in the New Year for the Morning Brew?

A Thank You to Stream Readers

John Zmirak offers part two of his series, “The Vaccine is a Toxic Sacrament of Globalism, Paternalism, and Abortion.” It’s “Our Fascist Moment,” he explains.

Joseph D’Hippolito spans the globe for “Vaxattack: Why Did Hundreds of Highly Trained Athletes Die Unexpectedly This Year?”

An amazing and unique take from Tom Gilson on the biological male smashing women’s swimming records: “The Very Bad Interview With the Very Unlikable Transgender Swimmer, and Why You Should Watch It Anyway.”

Al Perrotta is the Managing Editor of The Stream, chief barista for The Morning Brewand co-author, with John Zmirak, of The Politically Incorrect Guide to Immigration. You can follow him at @StreamingAl at Gab, Parler, MeWe and now GETTR.