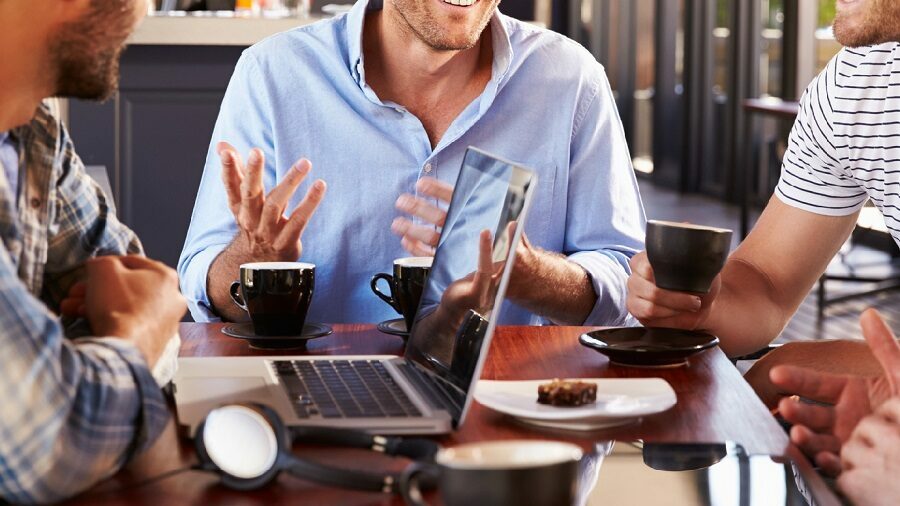 And a hearty, manly, welcome to the new folks we met at Promise Keepers who are getting their first sip of the Morning Brew.

“We are not storming the Capitol, we are storming the gates of Hell in the name of Jesus Christ!” So declared Rev. Sammy Rodriguez to the tens of thousands gathered at AT&T and countless men watching around the world. He was talking about us “Hidden Warriors.”

Rev. Rodriguez echoed a thought I had during the Friday evening session of Promise Keepers. Just 19 men committed to their god brought down the Twin Towers. Just imagine the spiritual strongholds that can be brought down by these thousands of men dedicated to the true God.

Stream founder James Robison followed him by encouraging us that when we lose our life — to find it in the fullness, power and fruitfulness of the Holy Spirit — then God’s Will is done on earth! And that is the only way we can really find the abundant life He offers. In God’s Kingdom purpose is where we fulfill our Father’s dreams.

Last Night🙌🙌🙌 This is what it is all about. Fathers, Sons, and Brothers in the altars surrendering their lives to Christ and creating a new legacy for their families. Can’t wait to see what God is going to do today!#PromiseKeepers#PKConference pic.twitter.com/j0x0zMCiJd

Let’s talk about the power of God and the power of people to change. Former Cowboys wide receiver Michael Irvin was part of a Saturday panel of NFL Hall of Famers. I cheered him. The notion that I — a lifelong Redskins fan — would cheer a Dallas Cowboy … in the Cowboys’ stadium. Only God, friends. Only God.

Just ask the guy who won a grill from us yesterday. He was at Promise Keepers with five buddies. Apparently, they had been ribbing one of their buds for having been forced by unforeseen circumstance to drive his pick-up to the stadium. (Not sure why someone in Texas driving a pick-up would be the subject of jest. Pick-ups are as much a part of Texas as mosquitos. But you know how male friends can be.)  Who was laughing when they needed that truck to get the grill home?  Well, all of them actually.

God had provided before they even knew they would have a need.

Sometimes stunts go wrong. That’s why politicians should leave it to the professionals. You remember those pictures last week of Democratic Texas legislators riding and flying out of Texas to deny GOP lawmakers a quorum? How we could see their jolly, smiling faces … because they weren’t wearing masks on the plane?

Turns out five of those lawmakers have now tested positive for COVID. Of course, we pray for their safe and quick recovery. (Incidentally, all five were vaccinated.)

A new indoor mask mandate went into effect in Los Angeles County Saturday night. The mandate had been ordered by the county’s Department of Health. However, L.A. County Sheriff Alex Villanueva says he’s not going to be enforcing the mandate.

In a statement, Sheriff Villanueva said the order isn’t “backed by science” and contradicts the CDC’s own guidelines. Plus, defund the police efforts have left his department spread too thin. Said Villanueva, “the underfunded/defunded Los Angeles County Sheriff’s Department will not expend our limited resources and instead ask for voluntary compliance.”

The good sheriff is dealing with a horrific spike in violent crime in the city. In addition to defund the police efforts, L.A.’s new progressive D.A. treats violent criminals like Beverly Hills poodles; gently walking them right back onto the streets. Throw in a massive homelessness problem, illegal immigrants pouring in, and the City of Angels is turning into a hellhole.

As is all of California. Stream contributor George Janek has had enough. He and his wife are both lifelong Californians. Cut Mrs. Janek, she bleeds Dodger blue. They’re now shopping for a new Red State to call home. He writes about it in a fantastic new article, “MWC Seeks Like-Minded RS for a Long-Term Relationship.”

(By the way, is it possible Hollywood is so in favor of masks because it allows actresses — and actors — to hide any plastic surgery work they’re having done?)

On Friday, a Federal judge ruled that Obama’s DACA program was not legal. Duh, Obama knew that. Ordered it anyway. “Congress? We don’t need no stinkin’ Congress.”

On Saturday, Obama’s VP Joe Biden … who also knew it was illegal to just make up massive government immigration programs on a whim … announced he’s appealing the decision. He wants to “preserve and fortify” DACA. Would be nice if he tried just fortifying and preserving the Constitution.

Trump, if you remember, wanted to properly encode DACA into law, as part of an immigration package that included the Wall. But the Democrats wanted no part of a Wall that could restrict illegal immigration. Hence, no DACA law.

High Tech Balloons to the Internet Rescue in Cuba?

Tomorrow we’ll talk more about the Biden government’s full embrace and partnership with Big Tech censorship. But let’s end on a happier note: How we can thwart the Cuban government’s efforts at blocking internet access to help quell pro-Democracy protesters there.

FCC Commissioner Brendan Carr says high-altitude high-tech balloons can provide internet capability to the imprisoned island. The advantage, tweeted Carr, it’s “a proven tech that would not require new infrastructure in Cuba.” We can also support tech like censorship thwarting tool Psiphon, he said, “which can help Cubans use the island’s existing networks by circumventing blocking.”

Psiphon said it was able to help 1.4 million Cubans access the web on Thursday alone.

On Sunday, churches in the U.S. heeded the call from Franklin Graham and Sammy Rodriguez to pray for Cuba. The internet-providing balloons aren’t the only “higher” power that can help free that nation.

Catch up on your Z’s! John Zmirak is back with “The Left is Laser Focused, The Right in Disarray. What Must Be Done?”

Also, you can catch his “White Fear, Part Two.”