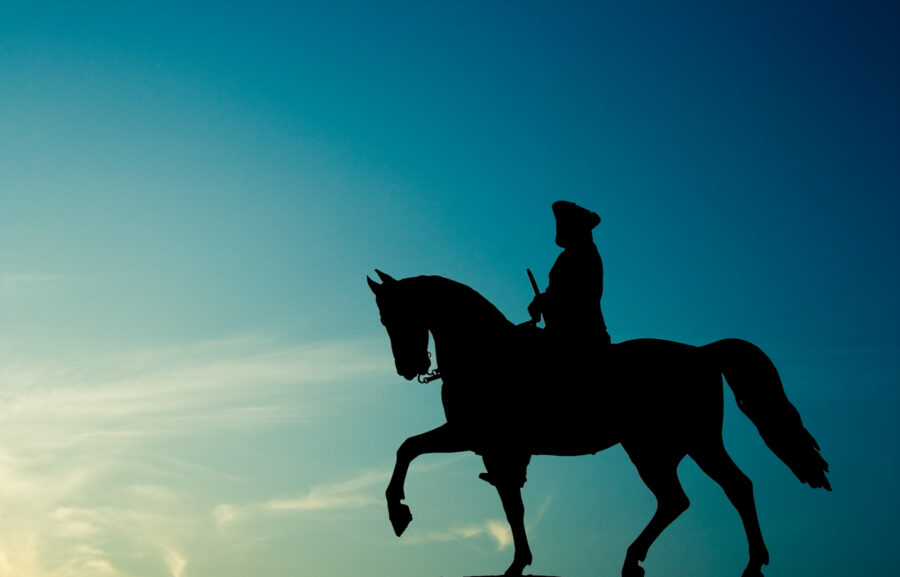 (But I repeat myself.)

Hope you like your Brew with a dash of the absurd. At least it’s not half and half.

I cannot tell a lie. Even Parson Weems couldn’t make this stuff up.

Still, the FBI affidavit gloats about all the high tech sweat went into tracking down the faux Founding Father.

Yoder insists he didn’t anything but walk in, walk around, and yap with some folks. He didn’t even “storm.” And funny thing, the FBI affidavit published by the Huffington Post agrees. In fact, reading it makes you go “huh?”

Did he plant pipe bombs near the DNC and RNC? Nope. (FBI’s too busy hunting down people like Yoder to solve that.) Did he assault any cops? Nope. Did he set fire to anything like the BLM/Antifa hordes at the White House? Nope. Blind federal agents as Biden and Harris’ pals did in Portland? Nope. Chase any congressional members down the halls like the Kavanaugh protesters? Nope.

Did he shatter any windows? Steal stuff off Nancy Pelosi’s desk? Tag or topple any statues? Nope. C’mon. Did he at least stick chewing gum under AOC’s seat in the House Chamber? Throw “Your Mama’s So Fat” jokes at Capitol Hill cops? Bite someone with his wooden teeth? Nope.

Isaac Yoder’s horrible offense? His revolutionary act of Insurrection? He went down to the George Washington Crypt inside the Capitol. And … you may want to keep your children from reading this … he agreed to take some photos at the crypt. O-M-G!!!!! String him up for the traitor that he is! Saying “Cheese!” is “worse than 9/11”!

Before we flip our powdered wig, we need to hear from the real George Washington:

“The eyes of all our countrymen are now upon us, and we shall have their blessings and praises, if happily we are the instruments of saving them from the tyranny meditated against them.”

Website for Medical Pros Asks “How Concerned Are You About Vaccine-Related Adverse Events?”

Medscape is a website for medical professionals. Their mission is to offer “the latest medical news and expert perspectives; essential point-of-care drug and disease information; and relevant professional education and CME.”

Earlier this week they asked users how concerned they are about “adverse events” related to vaccine use. They’ve gotten over 1300 responses.

Check them out: How concerned are you about adverse events related to the vaccines?

We are posting it simply because these doctors and nurses sharing their honest concerns and experiences is precisely the kind of thing the White House would call “misinformation” and ring up their pals in Big Tech.

We saw a similar situation earlier in the week. Twitter suspended the account of a reporter from Just the News for reporting on information directly from the CDC. Specifically, Greg Piper tweeted “Vaccines are not save for everyone.” He linked to a story about a girl being pressured by her college to take the jab even though it may paralyze her. Twitter only unlocked the account after CDC admitted the tweet was accurate. That “some people should not get certain vaccines or wait until getting them.”

How Did Biden Get 8.1 Million Extra Votes (Allegedly)? Maybe We Should Ask Sheila Jackson Lee.

On Wednesday, The Stream published my story “Was Joe Biden Spotted 8.1 Million Votes.” Naturally, you’d be asking “How does that happen?” Just look at Harris County, Texas.

National File has published a long, jaw-dropping expose on a massive ballot harvesting scheme there run by a Biden campaign staffer named Dallas Jones. (Jones was quietly fired during the 2020 campaign when word started getting out about his activities. And he was no low-level guy. He was in charge of Texas.)

Mike Huckabee has broken down the shocking story for us. “No Voter Fraud? Let’s Look at Harris County, Texas.”

From Our “Progressives Say the Darndest Things” file: Rep. Cori Bush says “Security for Me, Defund the Police for Thee”

If hypocrisy were helium, progressives would float high beyond the sky. Take freshmen Rep. Cori Bush. In epic fashion she defends paying $200,000 for her own security while calling for more defunding of the police.

This is Must See TV!

This could ruffle some feathers. The Washington Football Team Formerly Known as the Redskins will not be allowing fans into the stadium wearing Native American headdresses or face paint.

However, getting drunk and throwing up on the guy in the row in front of you? Still allowed.

Seriously, how this new rule applies to people who may actually be Native Americans is unclear. Then again, would you want to sit behind a guy in a headdress in any case?

Janet Boynes, who herself walked away from life as a lesbian, takes on Netflix with “Netflix Documentary Claims Its God’s Intention for Some to Be Gay.”

Also, Mark Judge has a thought-provoking new column called, “Welcome to The United States of Resentment.”

Enjoy those, and enjoy the weekend!