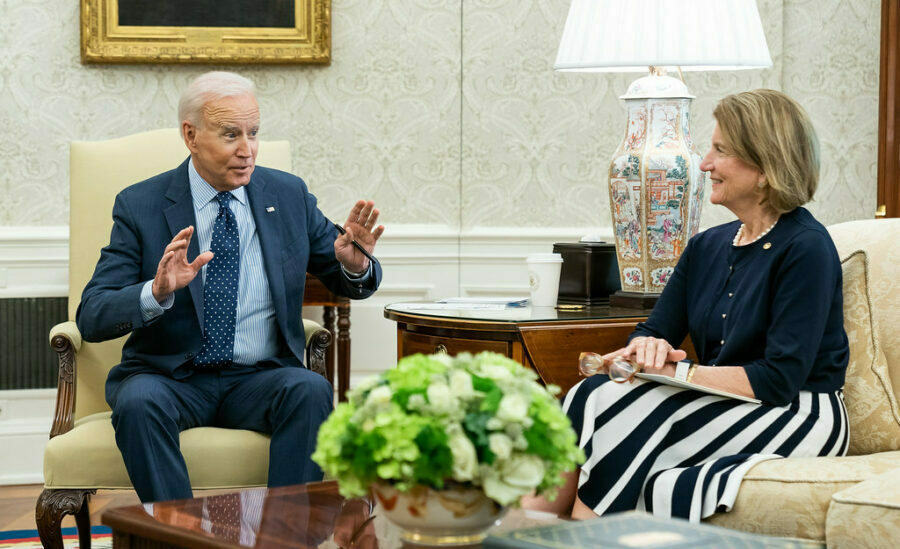 President Joe Biden meets with U.S. Senator Shelley Moore Capito, R-W.V. to talk about passing an infrastructure bill on Wednesday, June 2, 2021 in the Oval Office of the White House.

They tell you Joe Biden got 81 million votes in November. More than anyone in history, including birthday boy Barack Obama. Yes, the same guy who days ago was declaring “My butt’s been wiped” and eating food stuck on his chin. 81 million. If you’re Hillary Clinton, you’re saying, “There’s no way he got 15 million more votes than me!”

Biden was given 8.1 million excess votes.

Before you say Keshel’s whacked out, ask yourself a couple questions:

“Do I really believe Joe Biden got 15 million more votes than the first woman to ever be a major party nominee (65.8 million), whose adoring supporters were left wailing and screaming in the streets?

Or 12 million more than the first black major party nominee (69.5 million), an historic, charismatic candidate, whose worshipful supporters hailed him as a messianic figure?

Or six million more than the head of the MAGA Army who was filling arenas when Joe had trouble filling a few circles on the lawn? A guy who gained six million votes in 2020?”

No. Nobody really believes that.

If you believe that, you believe Barack Obama is having his 60th birthday bash catered by Dominos.

So How Many Extra Votes Were in Each State? 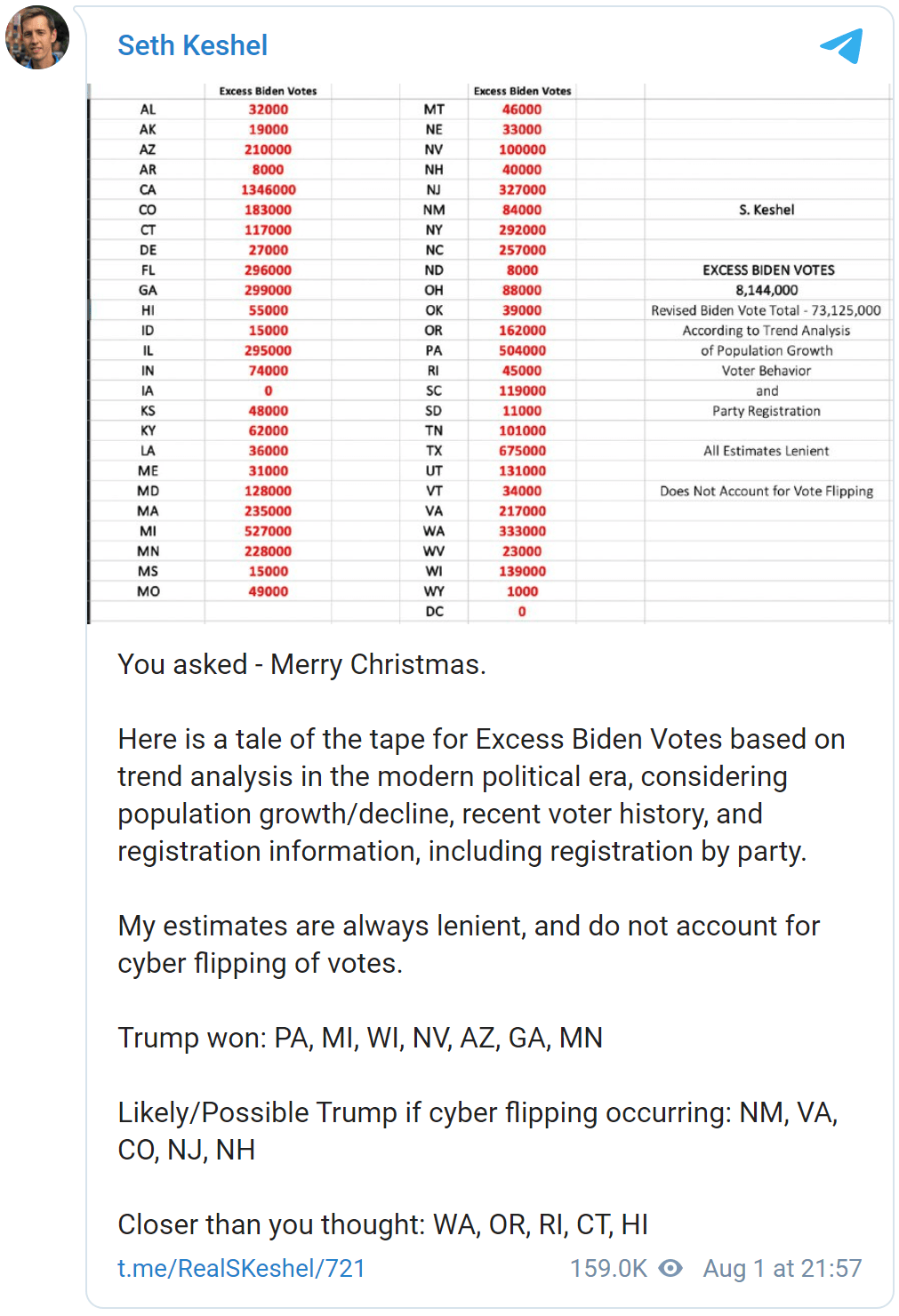 Keshel talks a bit about his methodology in this video clip:

Keshel has crunched the numbers. Biden’s “win” in November is the equivalent of him winning the 100-meter dash at the Olympics — and doing it in under 8 seconds.

Now comes the tough part. Proving the extra votes were illegitimate … and finding the people responsible.

The Man With Five Ballots

I’m personally curious about Keshel’s contention that Trump and Biden were really neck-and-neck in New Jersey. That Biden got about 327,000 more votes there than he should have. I buy that entirely.

Driving through New Jersey in mid-November, Trump flags and yard signs were everywhere. There were more Red Sox banners than Biden signs.

More significantly, the universal balloting in New Jersey covered the state like sand covers the beach — with bogus ballots. Take my father-in-law. He received five ballots at his house at the shore. Including two for my mother-in-law … whom he divorced during the Carter Administration … who never lived in the house … and has been dead for four years.

He also got a New Jersey ballot in his daughter-in-law’s name … a New Yorker through-and-through who certainly never lived at the beach house. In fact, would find the notion of living in New Jersey for even a day horrifying.

How many extra ballots ended up in the hands of people who had no qualms about filling them out? (Which, of course, was the point of universal mail-in balloting … as international election observers love to tell us. You need ballots to ballot-stuff.)

Symbolically, my best evidence the Garden State stunk like a Newark sewage plant? A diner in Toms River. A man who worked on Trump construction projects was loudly proclaiming what a great guy Trump was. (Yes, in New Jersey, “loudly proclaiming” is redundant.)

A young Hispanic working at the diner, bursts from around the counter, shouts he loves Trump too, and “Trump won!” The place erupted in cheers. Maybe one person lowered their face to their eggs. This in supposedly bluer than blue New Jersey.

Forget red states. Show me the diner in any blue state that would cheer Joe Biden. Then tell me again that he legitimately got 81 million votes.

Meanwhile, what’s the latest out in Arizona? Maricopa County’s Board of Supervisors are brats.

The board has been fighting the Arizona audit tooth-and-nail since day one. They have been subpoenaed by the Arizona State Senate to turn over election-related equipment, routers. Judges have ruled Senate subpoenas are legit. The County was to turn over the requested materials by August 1.

Read it for yourself. 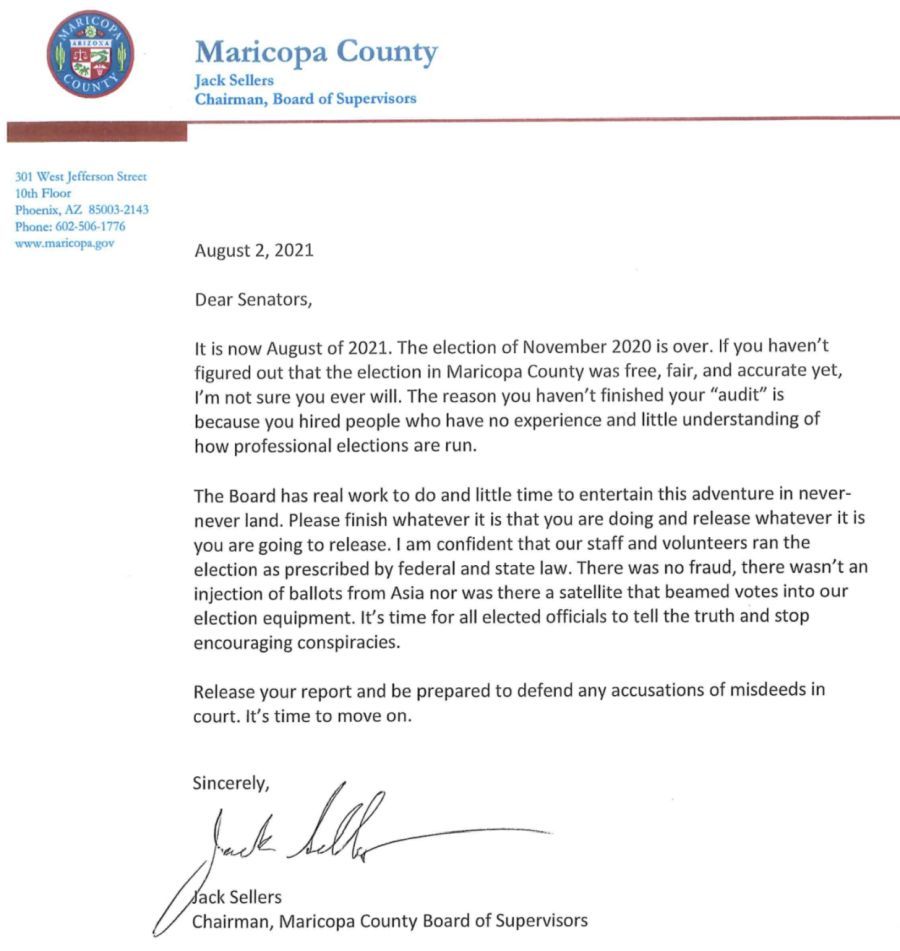 Do they sound like serious leaders or the “Mean Girls”?

Knowing how much sweat those Supervisors have spent to block an audit, does that letter make you more or less certain the election in Arizona was legit?

Send Them to Jail

State Rep. Wendy Rogers has had enough. She wants the Board of Supervisors and Dominion officials charged for ignoring State subpoenas.

On the plus side, State Senate President Karen Fann says the County is finally willing to hand over “copies of ballot envelopes and critical voter registration information.” But anything to do with routers and the Dominion machines, forget about it.

Also, the State will also be conducting an audit of the $3 million Mark Zuckerberg poured into the Maricopa County coffers to help Biden. The audit will also investigate just how Dominion became an election vendor in the state.