Welcome to the Special Memorial Day Edition of The Morning Brew 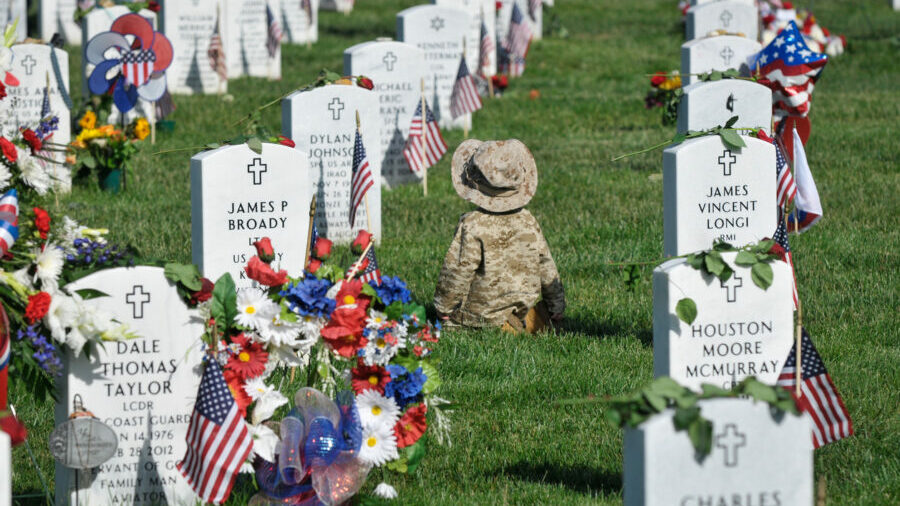 To set our focus on what the day’s really about, our Tom Sileo talked to a dozen Gold Star families to learn how they’ll be spending the day. His piece is titled: Memorial Day: America’s National Treasures.

With a thunder loud enough to drown out the cicadas, thousands of patriotic bikers roared around the Nation’s Capital Sunday, paying tribute to our fallen. Paying tribute in many instances to their own departed brothers and sisters in arms.

The bikers taking part in Rolling to Remember were forced to muster at RFK Stadium after the Biden Pentagon, for the first time ever, rejected their request for a permit to stage the motorcycle rally there. Perhaps if the bikers were going to wave BLM flags or the Hammer-and-Sickle instead of Old Glory they would have been welcomed.

Motorcyclists await the start of the Rolling to Remember ride in the parking lot of RFK Stadium in Washington, D.C., May 30, 2021.

And some more shots.

Participants in the Rolling to Remember motorcycle ride on May 30, 2021. The event is intended to remember prisoners of war and service members still listed as missing in action, as well as to call attention to the veteran suicide crisis.

God bless these riders. And may the Biden Pentagon remember next year whose sacrifice paved the way for there to even be a Pentagon.

The Commander-in-Chief: “Stay Cool This Weekend”

Joe Biden made his annual Memorial Day Weekend pilgrimage to the War Memorial Plaza in the shadow of the Delaware Memorial Bridge Sunday. Biden used the occasion to pay tribute to his son Beau, a veteran who died six years ago this weekend. “They’re the guardians of us and we’re the guardians of their legacy,” he told Gold Star families. “Despite all the pain, I know the pride you feel in the loved one you have lost.”

… if Biden wasn’t fresh off creepy comments the day before about the elementary school-aged little daughter of a vet: “I love those barrettes in your hair. Man, I’ll tell you what, look at her. She looks like she’s 19 years old sitting there like a little lady with her legs crossed.”

Joe Biden looks at a little girl in the audience, the daughter of a veteran, and says "I love those barrettes in your hair. Man I’ll tell you what, look at her she looks like she's 19 years old sitting there like a little lady with her legs crossed." pic.twitter.com/DbH8ihG2Mj

And his number two, oh boy.

The Commander-in-Chief in Waiting: “Enjoy the Long Weekend”

Maybe her only plans are to smoke weed and listen to Tupac. Kamala Harris, the Vice President of the United States, one feeble heartbeat away from being Commander-in-Chief, is also rather blasé about the holiday marking the sacrifice of hundreds of thousands of American soldiers.

“Enjoy the Long Weekend,” she tweeted from her official VP account, glam shot of herself included.

We could cut her more slack if this wasn’t the same woman who ended the recent tradition of saluting service members as she boards Air Force Two. She started saluting after a big stink was raised over her apparent lack of respect.

Likewise, on Sunday she set out a lazy mulligan of a tweet: “Throughout our history our service men and women have risked everything to defend our freedoms and our country. As we prepare to honor them on Memorial Day, we remember their service and their sacrifice.”

Throughout our history our service men and women have risked everything to defend our freedoms and our country. As we prepare to honor them on Memorial Day, we remember their service and their sacrifice.

Expect a third try today, making a big show of commemorating Memorial Day … before she and Biden go back to celebrating Marxism in the ranks and hunting patriots at the Pentagon. (See Tony Perkins’ “On the Front Lines of Biden’s Military Extremism.”)

The Stars and Stripes Act of 2021: Only the American Flag at US Embassies

We raise this flag to mark one year since the murder of George Floyd – we honor Mr. Floyd and stand in solidarity with other nations to advance racial justice, a key priority within U.S. foreign policy #BLM pic.twitter.com/IdApjPaJYR

Yeah, “America is racist and sucks grapes” is just the message you want your foreign embassies spreading. Seriously, is any other nation on the face of the earth flagellating themselves in foreign countries?

But three cheers for Republican Rep. Nicole Malliotakis (R-NY). She has introduced a bill that would prevent U.S. embassies and consular posts from flying political flags other than the Stars and Stripes.

“The American flag is a beacon of freedom and hope for oppressed peoples around the world; it should be the primary flag flown above our embassies and that is what my legislation seeks to accomplish,” Malliotakis said. “The Administration’s directive is an insult to those who made the ultimate sacrifice for our flag and our nation — especially as we head into Memorial Day weekend — and it is absolutely ridiculous that legislation is needed to correct this issue.”

Finally …. “The Sound of Freedom”

For Memorial Day 2018, I wrote a personal reflection, as one whose brother played the funerals of countless fallen soldiers lost in Vietnam. It’s called “The Sound of Freedom.” It still resonates.

“Drum and bugle. Anticipation and action in the cause of something greater than ourselves. This is the heart of Memorial Day. We are not honoring bravery for bravery’s sake. We are honoring bravery for the sake of others. Lincoln called it the ‘full measure of their devotion.’ Christ called it the greater love: ‘Greater love has no one than this; to lay down one’s life for one’s friends.’”

Thank you, dear soldiers, for your greater love.