The Mayor of Seattle Has a Rude Awakening About CHOP 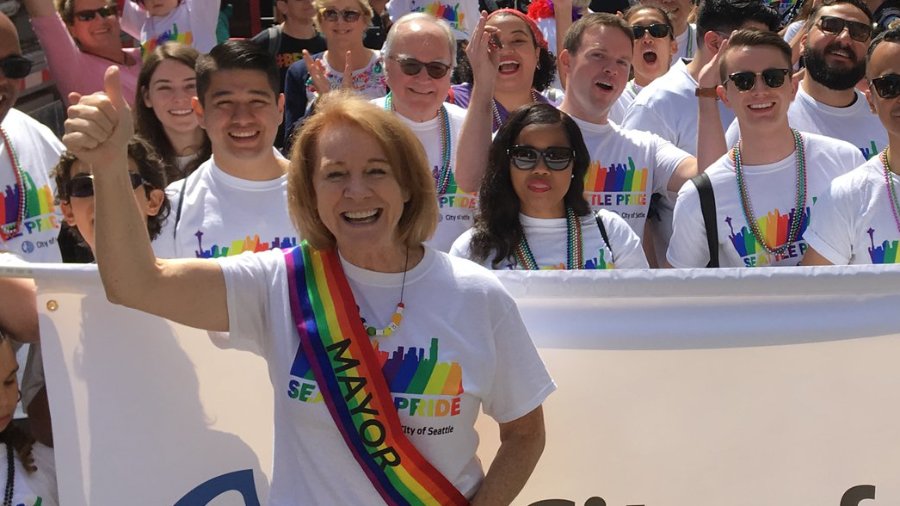 Seattle mayor Jenny Durkan: "We've got four blocks in Seattle that you just saw pictures of that is more like a block party atmosphere. It's not an armed takeover." File photo: Mayor Durkan marches in a pride parade with city employees, June 28, 2018.

Do you remember when Seattle mayor Jenny Durkan told CNN’s Chris Cuomo that the takeover of a portion of her city could turn into a “summer of love”? That it was “more like a block party atmosphere”? Well, today, in the aftermath of another fatal shooting, coupled with protesters marching into Durkan’s own community, she has said enough is enough. Mayor Durkan has called in the cops. Time to clear out CHAZ/CHOP!

Of course, all this was inevitable the moment the “Capitol Hill Autonomous Zone” was first set up.

CHOP Was Doomed From the Start

There’s a reason that every society has laws and law enforcement. People do not adequately police themselves. Lawbreakers break laws. That’s also why we have courts and prisons.

In short, the whole CHAZ/CHOP thing was one big joke. To call it a failed social experiment would be like calling a diet based on milk shakes, Oreos, cheeseburgers and fries a failed weight loss experiment.

CHAZ/CHOP was dead in the water before it ever started.

In this light, it’s incredible to see just how naïve Mayor Durkan’s comments were to Chris Cuomo barely three weeks ago.

More Like a Chopping Block Than a Block Party

She responded to one of his questions with this extraordinary answer, beginning with a criticism of President Trump’s assessment of the situation:

“So, I know it will shock you that the President is perhaps not giving an accurate or truthful picture.”

To paraphrase: Yes, this is just another of Trump’s lies. I’m here on the ground. I can tell you the truth about this beautiful new autonomous zone.

We’ve got four blocks in Seattle that you just saw pictures of that is more like a block party atmosphere. It’s not an armed takeover. It’s not a military junta. We will — we will make sure that we can restore this.

But we have block parties and the like in this part of Seattle all the time. It’s known for that. So, I think the President — number one, there is no threat right now to the public. And we’re looking — we’re taking that very seriously. We’re meeting with businesses and residents.

But what the President threatened is illegal and unconstitutional [meaning, making a presidential decision to restore order]. And the fact that he can think he can just tweet that, and not have ramifications is just wrong.

Not long after this interview, the name was changed to CHOP. And not long after that, protesters made specific reference to guillotines and the French Revolution. This is closer to the chopping block than to a block party. Let the truth be told.

A Travesty That Turned Into a Tragedy

Chris Cuomo, who began his segment as a hit piece on Trump, pushed back against Durkan’s claims, saying: “Mayor, the other counter by the President, and many people on the Right, will be ‘Well of course, Durkan has a “D” after her name. She’s going to be OK with this because these are her people. These are these Left-wing anarchists and radicals, and they’re letting them run free on the streets. You barely see any Black or African-American faces on those streets. This is about Lefty radicalism run amok in your City, and you seem OK with it.’”

Exactly. It didn’t take a prophet to figure this out. Outrage over the death of George Floyd was the pretense, not the ultimate reason, for the hostile takeover.

As for the predicted “summer of love,” it would be better to call it a month of hatred and blood.

In the words of Horace Lorenzo Anderson, the father of a 19-year-old black teen shot and killed inside CHOP, “This doesn’t look like a protest to me no more. That just looks like they just took over and said we can take over whenever we want to.”

As reported by the Daily Wire, “Horace Lorenzo Anderson, Jr., was the first person killed in CHOP, more than a week ago, during an outbreak of gun violence inside of the ‘autonomous zone.’Anderson’s father, Anderson, Sr., spoke late Monday, after another black teen, this time a 16-year old, was killed in the CHOP over the weekend, and a 14-year-old left wounded.”

This whole affair was a travesty that turned into a tragedy. Good riddance to CHOP! I imagine that businesses located there will be all too happy to see the police return.

A Teachable Moment: Separate Anarchy From Cries for Justice

On Sunday, the Seattle Times announced that, “After a full month of protests, demonstrators bring march to Seattle mayor’s neighborhood.”

Maybe that would be the next area to take over? And why not? After all, this would just extend the block party atmosphere and make the summer of love more wonderful still. Right?

In my previous article, I gave a stern warning to the liberal elites who thought that the mob would not soon turn on them.

That holds for Democratic mayors in Democratic cities. To repeat my question (which was the title of my article), “What are you going to do when they come for you?”

This doesn’t mean that we ignore pressing issues that have come to national attention. It simply means that we separate the spirit of foolish anarchy from the cry for justice and equity.

Let’s turn the CHAZ/CHOP debacle into a teachable moment. And we had better learn quickly before the same lessons are learned across America. The hard way.