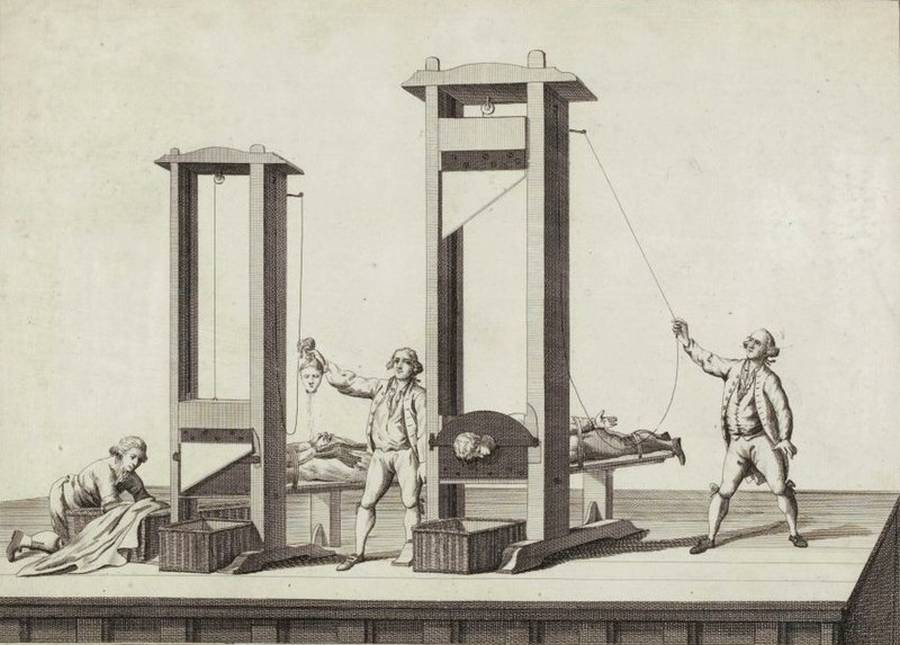 What do you call would-be revolutionaries chopping the heads of statues of Christopher Columbus and other historical figures?

I wrote that a couple weeks back as a bit of dark humor. Little did I know that in less than a week the anarchists and militants CNN loves calling “peaceful” would be threatening French Revolution-style beheadings. Even their new name screams “guillotine.”

In case you missed it, the Capitol Hill Autonomous Zone in Seattle, or CHAZ, changed its name. It now goes by Capitol Hill Occupied Protest, or … wait for it … CHOP.  The mayor talks “summer of love,” while these foaming radicals dream of the “reign of terror.” (Now, after a series of rapes and shootings in CHOP, Mayor Jenny Durkan is finally going to dismantle the occupied territory. She says.)

According to the Seattle Times, a speaker said “It is not CHAZ, it is CHOP,” then gave the gathered hordes a history quiz.

“That is the message we need to send! We are serious! This is not a joke!”

“Does anybody know what happened to the people who did not get on board with the French Revolution?”

As Mike Gonzalez at The Daily Signal noted: “Many conservatives, and even non-conservatives such as law professor Jonathan Turley, are coming round to the view that this is a moment not unlike those we saw in the French terror of 1793-94, or the Maoist Cultural Revolution of 1966-76.”

What are today’s Snowflake Jacobins getting to?

During France’s Reign of Terror, some 300,000 French — or roughly 1 in 50 French men and women — were arrested in a mere ten month period. At least 40,000 were killed. This does not include the countless others killed by vigilantes “and other self-proclaimed representatives of the Republic.” Over 2,600 in Paris suffered the guillotine.

You don’t have to go back to 18th century France to find fanatics who destroy historical monuments and thirst for beheadings. How quickly we forgot the Taliban and ISIS.

Why Do the Faces Look So Familiar?

I’ve been looking at the faces, listening to the screeching torrent of anger, off these white liberal 20-somethings and the wide-eyed explanations of “privilege” from women like Lisa Bender, president of the Minneapolis city council. I couldn’t quite place where I’d seen it before. Then I remembered. Go watch documentaries on the Manson Family.

Robby Soave, author of  Panic Attack: Young Radicals in the Age of Trump, wrote an article last year titled “How Antifa Apologists Fell in Love With Street Violence.” He summarizes Antifa’s position: “In the antifa view, their enemies started it — by making statements that serve to further marginalize people who languish under some form of oppression,” he wrote.

Caring about intersectionality means that an attack on one disadvantaged group is an attack on all. And if it is wise to stop people on the right from speaking against any member of the coalition, then it must occasionally be necessary to silence them when they try to speak. If they will not be silenced willingly, then violence is the only alternative.

The Media’s Slitting Its Own Throat

Last night, in the Nation’s Capital, Daily Caller reporter Shelby Talcott was attacked while covering the latest anarchist assault on Lafayette Square. How many french francs do you want to bet the Washington press corp will not call this out as an “attack on the press”? Jim Acosta gets his feelings hurt at a White House presser and they say the 1st Amendment is in danger. A reporter with a conservative publication gets attacked and … silence.

Last night, during that “protest,” the heirs to Rein of Terror set their sights on another familiar target: The church. St. John’s Church, burned only weeks ago, was spray painted with letters signifying “Black House Autonomous Zone.” As BLM activist Shaun King calls for the destruction of Jesus statues and churches.

How many francs do you want to bet there is less indignation in the media about this church desecration than about Trump’s stroll to St. John’s a few weeks back?

Why pick again on the media? Because despite CNN headquarters in Atlanta being targeted during the Floyd riots, the mainstream media is too arrogant and ignorant to know their own head will be on the chopping block.

Down the the Revolution

Ask French journalist Camille Desmoulins. He published a well-known journal during the Reign of Terror, called Le Vieux Cordelier, or The Old Cordelier. The journal was the public voice of the Dantonists. George Danton was an early leader of the French Revolution. So Desmoulins was down with the Revolution. But then he proved impure.

Why, he asks, has clemency become a crime in the Republic? Desmoulin would pay with his life for speaking out against the committees; his execution in 1794 was likely decreed by the revolutionary tribunals in order to silence one of the principle voices of moderation during the Terror.

Keep talking about how this organized revolution is “peaceful protest,” dear friends in the media. You might get that exclusive with Madame Guillotine yet.

Update: As this story was in the editing process, news broke that liberal MSNBC reporter Andrea Mitchell and Rep. Eleanor Holmes Norton were bum-rushed by a guy wearing a pink bikini in the so-called DC autonomous zone. Apparently her first response was to ask where the police were.