One of many Communist-run indoctrination camps run to re-educate Uyghur Muslims by China.

“In every disaster throughout American history, there always seems to be a man from Harvard in the middle of it.”

In Orwell’s novel 1984, there’s a book within a book. His publisher almost forced him to snip it out, but thankfully Orwell insisted. The section of the novel that barely survived is cast as part of a dissident manifesto by the leader of the Brotherhood. That’s the rumored (perhaps fictitious) resistance movement against Big Brother’s regime. Written by demonized scapegoat Immanuel Goldstein, the book exposes the real structure and purpose of the Ingsoc (English Socialist) Party and its government. 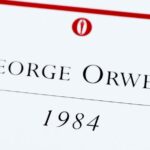 Entitled The Theory and Practice of Oligarchical Collectivism, the book speaks in blunt, Realpolitik terms. It explains that this new regime (and its two global rivals in Eurasia and Eastasia) is something quite new to the world: a tyranny which exists for no other purpose. It holds power for the sake of holding power, its vision of the future “a boot, crushing a human face, forever.”

No Refuge on Earth

Each of the three world regimes claims to oppose the others, and they fight costly wars over resources. But uniquely in human history, and damningly for the future, each is run by the same inhuman philosophy. So there’s no place for exiles, opponents, or dissenters to go. In fact, Goldstein suggests, these warring regimes don’t in fact wish to destroy each other. They keep a real war going as a kind of political fiction, to use up resources and keep their populations docile. The real goal of all foreign wars is to keep power at home. War is the health of the State.

Oligarchs of the World, Unite!

Welcome to 2021, where American oligarchs and Chinese Communist apparatchiks work together to censor free speech, to geld and tame the churches, and suppress political dissidence. Where Facebook and Youtube censor researchers’ speech that dissents from the World Health Organization, whose leadership answers to China. Where our lockstep media silenced real reporting on Joe Biden’s financial ties to Chinese intelligence agents.

And Pope Francis sold out the underground Christian churches in China, then ordered Catholics worldwide to back government mandates of abortion-tainted vaccines. And evangelical Christian Francis Collins of the NIH joined Anthony Fauci in approving gruesome live-birth abortions to harvest more baby organs for research on more vaccines. Pope Francis sent his right hand man, Bishop Marcelo Sorondo, to flatter the Chinese regime at a meeting of the Communist Party’s organ thieves. Those same men plunder the bodies of Uyghur Muslims and dissident Christians, for the money-printing black market organ trade.

Are you getting the picture? Maybe that whiff of brimstone you’re picking up is making you curious. How exactly do Western oligarchs and Red Chinese kleptocrats work together so seamlessly? We can find one hint of an answer in a piece of news. Like so much we read these days, it’s both shocking and unsurprising: Harvard helps train Chinese managers of the genocide of Uyghurs.

Two officials who oversee detention camps accused of committing genocide against Uyghur Muslims in Xinjiang, China, previously received fellowships from Harvard University, according to research by an Australian think-tank, The Financial Times reported.

Between 2010 and 2011, Yao Ning studied as an Asia fellow at Harvard University’s Ash Center for Democratic Governance and Innovation while pursuing a doctorate degree, according to a report by the Australian Strategic Policy Institute (ASPI), the Times reported.

Yao completed his studies in 2014, and he was later “appointed (Chinese Communist Party) Secretary of Maralbeshi County, a small and predominantly Uyghur county where ASPI researchers have identified nine detention facilities built or expanded since 2017,” according to the ASPI report, the Times reported.

Does this really surprise anyone? Will it surprise us when Harvard issues some bland disclaimer, and goes right on training genocide managers for the Chinese regime? Massive corporations like Nike and Apple have been deaf to complaints that slave labor by Uyghur and other prisoners of conscience is used by their Asian suppliers. The same U.S. sports stars who will kneel for our National Anthem, to honor urban felons shot by frightened cops, won’t say a word about China’s concentration camps.

The abuse of America’s history, its founders, and its system serve a purpose. They’re the handkerchief the magician waves in our face as he pulls the fillings out of our teeth. Likewise, the entire Woke ideology that our native Oligarchy is using to bully, divide, and repress our own working class is just a diversion.

Want to know what’s really happening? Watch for the convergence of interests between our own soulless, cash-gorged elites and those of the tyrants over in China. We saw it in the theft of the 2020 election, and we see it in the camps where Uyghurs get sterilized and tortured.

Are you still surprised that police forces in places as distant as Italy and Australia are using the same brutal tactics as China does in Hong Kong, in their crackdowns on vaccine dissenters? The same tactics used against January 6 protestors? Now our country’s chief law enforcement officer, Attorney General Merrick Garland, is stonewalling congressmen who ask about FBI infiltrators inciting the violence that day. He’s too busy sending more infiltrators to supervise our school board meetings.

I just played this video for AG Merrick Garland. He refused to comment on how many agents or assets of the federal government were present in the crowd on Jan 5th and 6th and how many entered the Capitol. pic.twitter.com/lvd9n4mMHK

Whether in Oceania, Eurasia, or Eastasia, the oligarchs are the same. And they increasingly work together, to target the rest of us.