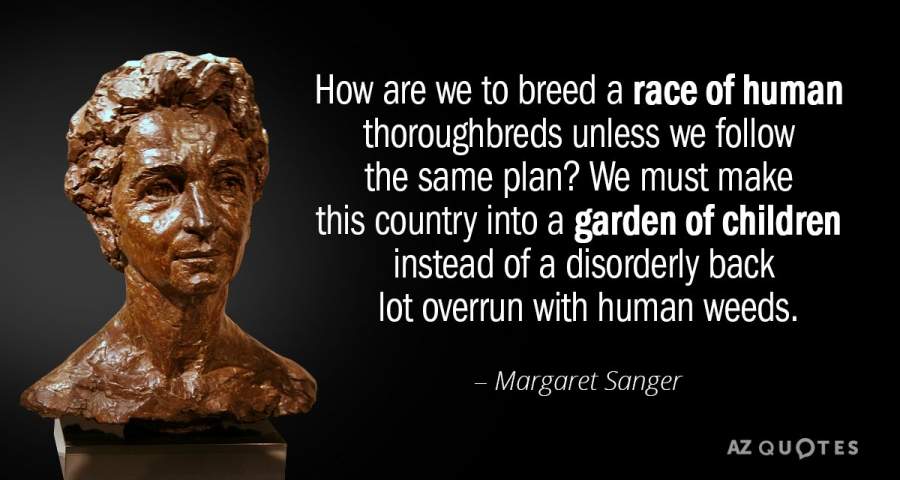 Sometimes when people describe something as “demonic,” they’re engaging in hyperbole. At others, they’re indulging in hysteria. As NeverTrumper Rod Dreher was when he accused Donald Trump of unleashing real “demons of racism” on America, not long before the 2020 election. When I use the word, I mean it precisely and descriptively. Planned Parenthood doesn’t just have the approval of demons, or preach the doctrine of demons. Based on the research I’ve seen, it originates with demons, as pizza does with Italians.

Now, most pro-lifers know that Margaret Sanger was a noisy, obnoxious racist. She believed in the Darwinist offshoot eugenics, and agreed with Darwin himself that there is a hierarchy of the races. Like him, she thought that the “higher” races would and should eliminate the “lower” ones. She spread this message among WASP elites, and at Ku Klux Klan rallies. She worked closely with a leading Nazi eugenicist, who’d run a concentration camp in Africa and experimented on black prisoners of war.

After decades of pro-lifers repeating such facts, Sanger’s own organization, Planned Parenthood, was forced to throw Sanger under the bus. Hillary Clinton will likely be the last presidential candidate to receive a “Margaret Sanger Award.” Even the clinic Sanger founded in Lower Manhattan has removed her name from its door. It no longer sits at “Margaret Sanger Place.” The left has gotten the memo.

Some pro-lifers know more. They realize that Sanger’s embrace of fashionable “scientific” racism wasn’t at the heart of her ideology. Instead it was something of a fig-leaf, to cover what she really cared about: which was total sexual libertinism. I wrote about this way back in 2008. Drawing on the sourcebook Blessed Are the Barren, I revealed that her worldview was borrowed from the Marquis de Sade’s gnostic pansexualism.

Sanger used socially acceptable racism to make contraception acceptable, to a society which at the time thought only prostitutes would use it. Sanger tapped into the tribal panic of nativist Americans at the influx of Catholic and Jewish immigrants and the “threat” of emancipated blacks — as the powerful documentary Maafa 21: Black Genocide demonstrates in detail.

Other writers have dug a little deeper. Benjamin Wiker, in the irreplaceable Ten Books That Screwed Up the World, unearthed the mystical vision that lay behind Sanger’s pseudo-science. He documents in that book that Sanger treasured a messianic fantasy of human “progress” that lay just around the corner. We could transform our entire species, and become like gods in an earthly paradise. If only we unleashed the vast sexual energies that currently were repressed by outmoded morality and dead religions. Here’s a representative quote:

Hidden in the common stuff of humanity lies buried this power of self-expression. Modern science is teaching us that genius is not some mysterious gift of the gods, some treasure conferred upon individuals chosen by chance…. Rather is it [i.e., genius] due to the removal of physiological and psychological inhibitions and constraints which makes possible the release and the channeling of the primordial inner energies of man into full and divine expression.

The removal of these inhibitions, so scientists assure us, makes possible more rapid and profound perceptions, — so rapid indeed that they seem to the ordinary human being, practically instantaneous, or intuitive. The qualities of genius are not therefore, qualities lacking in the common reservoir of humanity, but rather the unimpeded release and direction of powers latent in all of us.

Wiker goes on, weaving together further statements of Sanger’s:

Birth control not only keeps the dead weight of human waste from propagating, but for the lucky rest of us it allows an astounding increase in IQ. No wonder the future looks so rosy. ‘Let us look forward to this great release of creative and constructive energy,’ wherein ‘the great adventures in the enchanted realm of the arts and sciences may no longer be the privilege of a gifted few, but the rightful heritage of a race of genius.’ 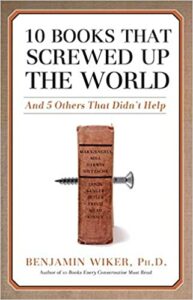 How to bring about these great adventures? ‘The abolition of the shame and fear of sex. . . . Through sex, mankind may attain the great spiritual illumination which will transform the world, which will light up the only path to an earthly paradise. So must we necessarily and inevitably conceive of sex-expression.’

We realize, by the time we get to Sanger’s finale, that sex has become her god, her idol, her religion: “Interest in the vague sentimental fantasies of extra-mundane existence, in pathological or hysterical flights from the realities of earthliness, will have through atrophy disappeared, for in that dawn men and women will have come to the realization, already suggested, that here close at hand is our paradise, our everlasting abode, our Heaven and our eternity. Not by leaving it and our essential humanity behind us, nor by sighing to be anything but what we are, shall we ever become ennobled or immortal. Not for woman only, but for all of humanity is this the field where we must seek the secret of eternal life.’ [emphasis added]

All that is crackpot enough. Sanger created for herself a sex-cult, which combined racist politics and libertine morality to form a toxic creed that appealed to elites, whose faith in the Bible had crumbled thanks to blind acceptance of Darwinism.

But that is just the beginning of the story. Things get much, much deeper and darker, and quite literally demonic, as I will reveal in my next column.