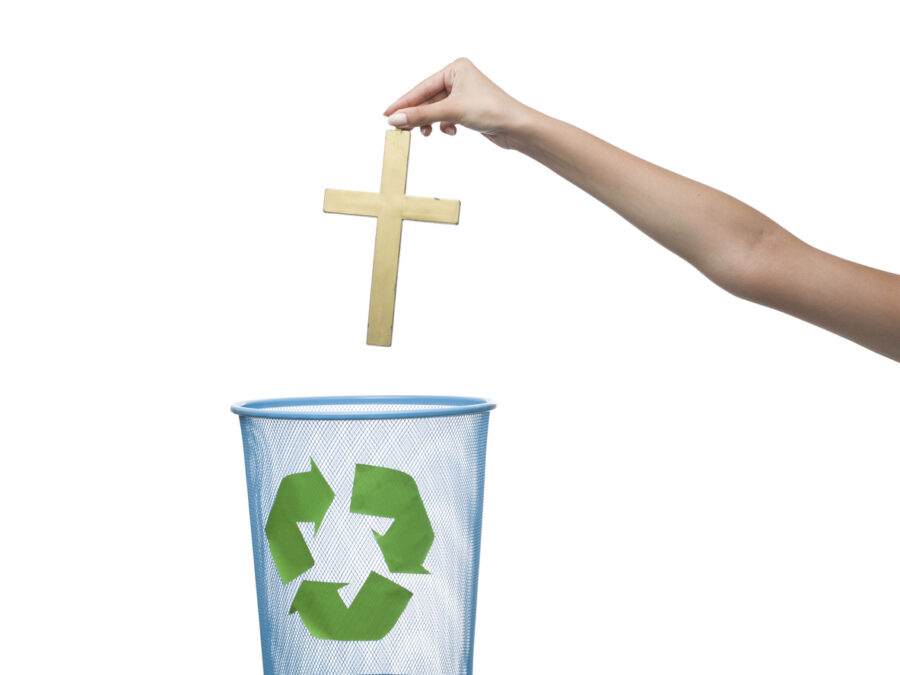 In Part One of this series, I described how Amanda Marcotte, a political writer for Salon, gloats over “loss of share” for Christianity in America’s religious marketplace. It’s our own fault! She argues. We try to force our faith down the throats of the American people, for instance by opposing Roe v. Wade. No wonder young people run in horror from the churches! (Or just stay in bed.) I showed that she grossly misreads, even falsifies, the words of the Constitution to make this point. (She also failed to note, I might add, that Mississippi’s new abortion law is arguably laxer than those in most European nations. So the Religious Right rules Copenhagen just as fanatically as Biloxi, Mississippi?)

The ‘Toxicity’ of American Christianity

To prove the “toxicity” of American Christianity (and her own loose grasp of the Constitution and of relevant facts), Marcotte next addresses another case recently decided by the Supreme Court, Kennedy v. Bremerton School District:

This term, the Supreme Court ruled in favor of a high school football coach who wants to lead Christian prayers from the 50-yard line during games, which is a direct reversal of decades of jurisprudence against coerced religious displays in public schools.

Coach Kennedy himself rebutted some of the falsehoods here. First, his prayers came after the game, not “during.” Second, Kennedy says he didn’t “coerce” anyone — rather, those God-hating kids asked if they could pray, too. Kennedy points out that he made two players who did not join, team captains. Even a parent who accused Kennedy of “coercing” students did not offer a stitch of evidence that he did so. I appreciate that parent’s concerns, given how I have seen public schools promote anti-Christian propaganda. But one should not make accusations without evidence.

Marcotte thinks young people are “walking away” from God because of a “culture clash” between conservative white churches and young Americans over “sexism, homophobia, and anti-science views.” Without explaining how skin color affects views on homosexuality or science among Christians, she warns:

“These trends will likely only accelerate in the wake of the Roe overturn, especially as Republicans grow more fanatical in their efforts to punish Americans for having sex. All but eight Republicans in the House voted against the legal right to use contraception … ”

Who actually believes that Republicans want to “ban contraception?” The bill in question seems to have been a bit of a sting operation. Republicans voted against, it seems: (a) for fear it would be used to force Catholic institutions into acting against their consciences; (b) and to mandate abortion pills; (c) and that parents would lose a role in their children’s decisions.

Who is the Real Fanatic?

Returning to education, Marcotte asks you to believe that Republicans will ban books along with pills:

“As with the GOP-led book bans only leading more kids to read the forbidden books, Republican attempts to foist their beliefs on others only causes more backlash against Christianity itself.”

In the link Marcotte gives here, a flamboyant but seedy-looking Texas drag queen reads The Return of Thelma the Unicorn aloud while a girl of about five looks on at a cautious distance. NBC speaks in the accompanying article of “an unprecedented effort by conservatives across the state to prohibit books dealing with sexuality, gender identity and race.” The authors link to another article, this one about a lesbian youth distraught to find books like Jack of Hearts (and Other Parts), a book “about a gay teenager who isn’t shy about discussing his adventurous sex life,” removed from her school library.

The Left uses the term “ban books” in such contexts again, to manipulate the gullible. As an educator who once created a library for the international school I helped found, here’s our dirty little secret: all librarians and teachers “ban” books in the sense these people use the word. That is, we decide which books are appropriate and helpful for children at what ages, and which are not. This is how grown-ups act.

For one thing, there’s only so much space in a school library, or in a literature anthology (which I have also created, with quality selections by pagans, Hindus, Buddhists, Muslims, and atheists as well as Jews and Christians).

Space is limited. Time is short. Some themes are inappropriate at some ages. Most books are of low quality.

I agree with Marcotte that “mandated faith is morally reprehensible and in direct violation of human rights.” I even agree that the link between Christianity and the Republican Party turns some folks off: I warned here in 2016 that support for Trump might have that effect.

Let me make four points in conclusion. Yes, some Christians and some conservatives are obnoxious. I wish Christians would “speak the truth in love,” but we often fail to do so.

But second, justice and truth matter. So at some point, I must say, “Let young Americans walk, if they find Christianity too raw and counter-cultural. Better half as many Christians, than people calling themselves by Christ’s name who think ‘anything goes’ in the sight of God.”

I think it wrong to tear the heads off of babies at seven months. Or to cut healthy organs from young people. I see it as deeply immoral to slap babies who survive the birth canal with $100,000 worth of instant national debt. Nor do I think encouraging kids to have an “adventurous sexual life” in the face of monkey pox, AIDS, syphilis, family breakdown, and the proven failures of broken homes, should be a goal of public-school education. (Any more than I recommend “adventurous electrical wiring.”) If you leave Christ because I vote for the party that agrees with me on policies that I think will bless society more than NEA has managed, don’t let the door hit you on your way out.

Kids can be gullible. Many who leave Christ will return when they wise up. Plus, as Screwtape noted, “our father below” (the devil) is master of “practical propaganda.” We come into this world equipped with arms, legs, lungs, and sex organs, but the wisdom to use them constructively is not fully pre-installed. We have been furnished with an Owner’s Manual for our souls, but some kids are too busy blowing up space aliens to read it. I’m not going to flatter them to warm pews: still less, to ensure Mitch McConnell’s troops capture committee chairs in Congress. Truth is sacred, but it only sets us free by invitation, not by coercion or lies.

Which brings up my third point: why are some young people leaving the Church? Marcotte says Christian conservatives blame “liberals, schools, immigrants, pop culture.” A state school that portrays Christianity as an unmitigated disaster, and fails to mention any of the vast reforms which Christians have introduced, probably does dispose young people to turn away from the faith. So, no doubt, does smutty, hedonistic pop culture. And if immigrants come from non-Christian countries, their presence, welcome as it may be, will naturally dilute the percentage of Christians in America.

But unconsciously, Marcotte demonstrates another reason young people leave the faith: the endless fibs she and her allies tell. Fibs about the Constitution. Fibs about Neil Gorsuch. Fibs about history. Fibs about human nature. Fibs about the bonds that bind families and societies, creating the “success sequence,” without which so many lives, and communities, are torn asunder.

Finally, how can any kind-hearted person view the present state of young America and gloat?

I am sad to see the Church decline (for now: these things often go in cycles). It also breaks my heart to see young people huddle alone in their rooms all night before flickering screens. The epidemic of obesity worries me. I was horrified when I heard that 100,000 Americans died of drug overdoses last year. I feel sorry for kids these days: renewed threats of nuclear war, massive debt, AI, the chance that they will not be born at all, and so much loneliness.

Kids these days deserve a little kindness. Come what may, I will try to offer it, and also teach them honesty, including when they read history and the Constitution.