The Chinese Virus Exposes the Banality of Tyranny

What's extraordinary is Constitutional liberty, based on biblical truths. 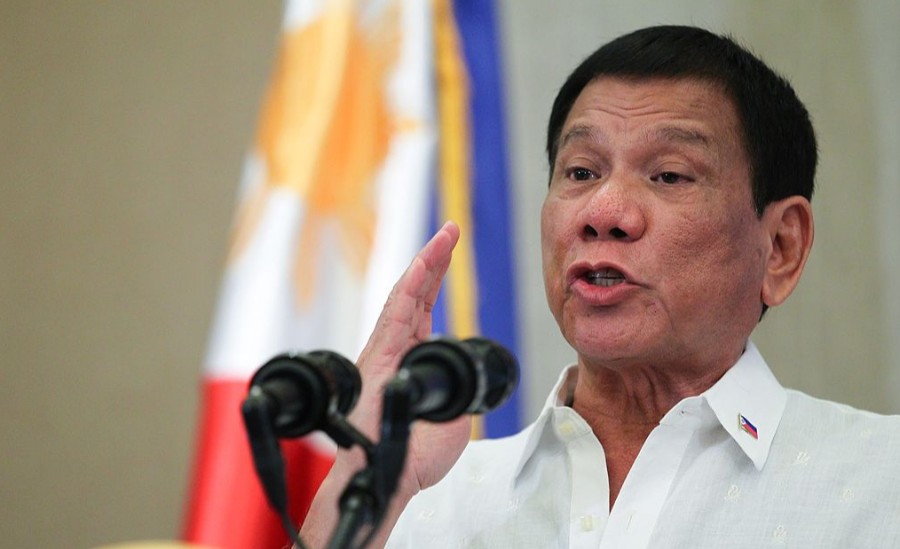 In this September 28, 2016, file photo, President Rodrigo Duterte delivers his message to the Filipino community in Vietnam.

A paralyzing fear of death has gripped the American commentariat. Most of the commentary you’ve seen about COVID-19 has probably focused exclusively on preventing the contagion’s spread. But it has neglected all other concerns.

Last week, American journalists took a brief moment to express its shock and surprise. The brutal Philippines dictator Rodrigo Duterte had threatened his own people with mass murder. As reported at CBS News:

In the Philippines, the 57 million residents of the country’s main island, Luzon, are under strict lockdown orders to prevent the spread of COVID-19.

Philippine President Rodrigo Duterte took to the airwaves with a chilling warning for his citizens: Defy the lockdown orders again and the police will shoot you dead.

“I will not hesitate. My orders are to the police and military, as well as village officials, if there is any trouble, or occasions where there’s violence and your lives are in danger, shoot them dead,” he said in a mix of Filipino and English in the televised address. “Do not intimidate the government. Do not challenge the government. You will lose.”

In reality, Americans should not be surprised by this news. And here’s why: Duterte is normal.

Our founders knew themselves. As human beings, they would not become less prone to corruption and sin once they attained positions of power over their neighbors. Quite the opposite.

The State Is a Wolf on a Leash

Our nation’s founders understood the truth too well. Human governments are abusive and threatening by default. What made our founders extraordinary is that they knew they belonged to a human race that had been corrupt and sinful ever since the Original Sin of their first parents Adam and Eve.

Our founders knew themselves. As human beings, they would not become less prone to corruption and sin once they attained positions of power over their neighbors. Quite the opposite, in fact.

That humble tradition of Western political philosophy, as I’ve written here before, “gave us the Magna Carta, the United States Constitution, and later the abolition of slavery in both Britain and the U.S.”

This same tradition of thought gave us the U.N. Charter of Human Rights. It asserted human dignity against the illiberal and exclusionary hate of the Nazi regime at Nuremberg. Each of these documents stems from the same liberating and humane political philosophy that has always stood against any faction that threatened to pit man against man.

And in that political philosophy we also hear echoes of the blessings of true and tolerant religion. As Thomas Jefferson famously put it, “all men are created equal,” and “they are endowed, by their Creator, with certain unalienable Rights.”

One Dang Pharaoh After Another

Duterte, on the other hand, is cut from the same cloth as every other arrogant ruler since the Pharaoh who ordered Hebrew midwives to perform forced abortions on their own people in the Book of Exodus. Why? Because he worried they would “challenge the government.”

As John Zmirak and I wrote in The Race to Save our Century, our age has been rife with leaders who did not take the humble route of our founders. Or submit their own ambitions to a constitution based in the natural moral law.

You know all the names of these 20th Century pharaohs. They will live in infamy. They oversaw the greatest mass murders of their time, and carved their names into our history books.

But these villains were not extraordinary men. They were, like Duterte, quite normal. The great political philosopher Hannah Arendt famously described the small-minded motives of tyrants and thugs as “banal.”

What set such men apart? Something quite simple. There was nothing to hold them back, no enforceable constitutional code. No institutions existed to defend the moral law or the rights of their people.

Historically and globally speaking, few have had the privilege of constitutional guarantees against orders like Duterte’s: “Shoot them dead.”

Look at China. That’s where the COVID-19 outbreak originated. There countless innocent civilians, just like you and me, lives as slaves today in concentration camps and factories.

The Communist Party wields complete control of information in China. So we know very little about their containment of the virus. But one ominous piece of data suggests the unthinkable. Some 21 million cell phone users have disappeared off the grid in China, even as the lying regime boasts implausibly low mortality rates.

It Can Happen Here

And don’t think for a moment that the worst can’t happen here. America’s politicians are fallen men too. They’re just as prone to flout the moral law and our rights, and trample our dignity.

They just need to sniff the opportunity on the wind. Already, Governor Andrew Cuomo and Mayor Bill de Blasio of New York have shown themselves to be just as dangerously ordinary as any other petty tyrants.

Like a primitive highway robber, Cuomo is taking thousands of dollars from private citizens who disobey his new “social distancing” protocols:

Today I am increasing the maximum fine for violations of state-mandated social distancing rules from $500 to $1000.

This is an enemy we have underestimated since day one.

This is not the time to be lax. We need to #StayHome and stay properly distanced.

Perhaps most alarmingly of all, Gov. Cuomo has deployed the National Guard to seize ventilators from hardworking hospital workers in rural (Republican) districts. Why? To transfer the equipment to urban (Democratic) districts that represent his political base. This despite the warnings of medical experts that these ventilators will soon be needed even in remote areas.

President Donald Trump’s medical advisers are unanimous. Like the media, they want Trump to focus single-mindedly on fear of the virus, and containing it at any cost.

But for my part, I hope President Trump considers this perspective as well: What if our fear of a passing plague is blinding us to a greater, more persistent danger. What if something could prove more deadly in the long run than even the most pessimistic of COVID-19 death toll projections?

I’m talking about the danger of becoming ordinary — like the careless ordinary men who trampled countless human lives in Europe and Russia in the 20th Century. Like Xi Jinping and Rodrigo Duterte.

As U.S. President, Donald Trump knows his power is circumscribed. What hems it in is the wisdom the Hebrews learned after their Exodus from slavery in Egypt. Governments are just as fallen and fickle as the human beings who operate them. Their saving grave? Constitutional limits based on the framework of the eternal moral law.

In the face of today’s crisis, ordinary men are showing their true colors the world over. For the sake of the American people and their precious heritage, it’s up to President Trump to have the humility our founders had. The humility to be extraordinary.