Update: Armed man arrested near home of Brett Kavanaugh after declaring intent to kill the Justice. 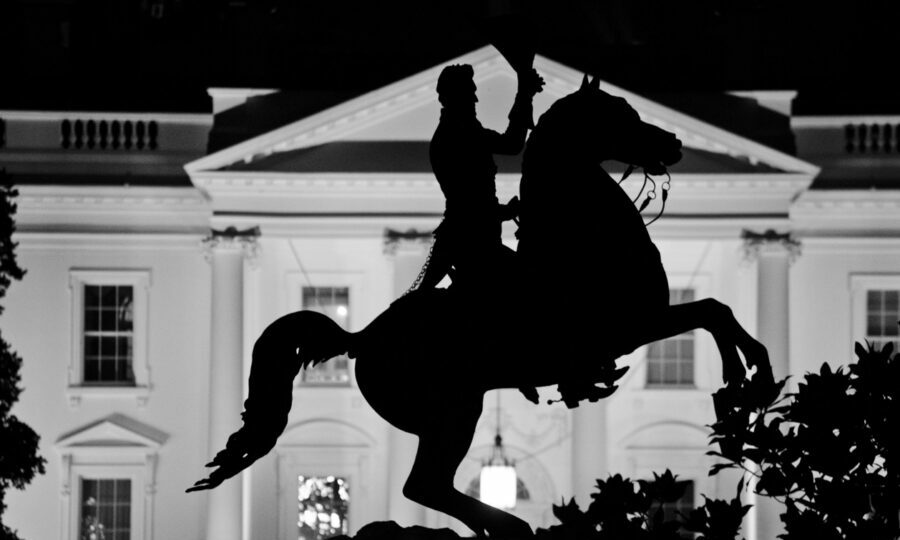 Well, that's actually a statue of Andrew Jackson on the horse, not Matthew McConaughey or Jimmy Stewart for that matter.

Today’s Brew is flavored with a bit of wry.

Thanks to the great Sara A. Carter for this headline and story: “Ladies at MSNBC Blame ‘Republican Women’ for ‘Upholding the Patriarchy.’”

Sure, we can talk about how doofy their arguments are, but I am far too offended. How can they blame Republican women when they can’t even define “woman”?! How dare they assume the party is binary?! What if it’s gender-fluid Republicans upholding the patriarchy?! Or transgenders? What a bunch of gender-phobes!

Yes, I’m being satirical. Sadly, absurdly, this next story is 100% legit.

Burger King in Australia is commemorating Pride Month in a manner only some woke manager who’s been punched too many times in the head by a kangaroo could come up with. They’re offering the “Pride Whopper.”

What do they do? Remove the pickle? No. But close.

They are offering the Pride Whopper hamburger sandwich with either two top buns or two bottom buns to promote “equal love and equal rights.”

CNN reported on this with a straight face. (Well, not “straight” in the heterosexual sense.)

“Equal rights”? Hamburger buns is not exactly the march on Selma, is it?

Yeah, we make fun of stories like this, but there’s absolutely nothing funny about the “Drag Your Kid to Pride” event at a gay bar in Dallas last weekend. Nothing funny at all about parents bringing their kids to stuff money in the g-strings of gyrating, adult men in drag under the glow of vulgar neon signs.

Dr. Michael Brown has weighed in on the twisted event. “Why are People So Surprised That Little Children Were Entertained by Drag Queens at a Gay Bar?”

Because nobody in the White House can convincingly articulate anything, or has any credibility, the administration has to resort to stunt casting. Last week, it was the K-pop sensations BTS with Joe Biden. On Tuesday, it was Oscar-winning actor Matthew McConaughey center stage in the White House briefing room.

McConaughey, who’s padded his bank account with several shoot-em-ups over the years, offered a 22-minute speech calling for gun reform. He pitched his appeal to both sides of the aisle.

Now, we aren’t going to fault the Texan’s sincerity. He’s from Uvalde, as it happens, and his heart is breaking. Further, as actors go, McConaughey’s proven over the years to be a reasonable, thoughtful, at times inspirational public figure off screen.

Agree or disagree with him, he’s earned respect. What is disrespectful is the White House showboating by using a celebrity inside the White House for a message they’re too weak to sell themselves.

Consider the absurdity. The White House uses an actor in the briefing room … while building a fake set for Joe Biden to speak from.

‘American Values? You Can’t Say THAT!’

Oh, Matthew. Didn’t you get the memo from The Squad and the progressives? America has no value. Talking about “American values” is xenophobic.

Department of Homeland Security has put out a bulletin warning about a “heightened threat environment” this summer. What’s the first clue, sparky? The left and abortion radicals promising a “summer of hate”?

“In the coming months, we expect the threat environment to become more dynamic as several high-profile events could be exploited to justify acts of violence against a range of possible targets,”

What events? How about the pending SCOTUS decision that could well overturn Roe v. Wade. Already pro-life pregnancy centers nationwide are under attack. The latest being the firebombing of the CompassCare center in Buffalo, New York. The third firebombing since the draft opinion overturning Roe was leaked.

The “Jane’s Revenge” terrorist group … and what else can you call a group firebombing and destroying pregnancy centers and churches … took credit for the attack.

Is DHS or DOJ going to press down on Jane’s Revenge and other pro-abortion radicals? Here’s the link to the full DHS “National Terrorism Advisory System Bulletin.”

While all manner of specific attacks and threats foreign and domestic are listed, here’s the entire entry involving reaction to Roe.

Given a high-profile U.S. Supreme Court case about abortion rights, individuals who advocate both for and against abortion have, on public forums, encouraged violence, including against government, religious, and reproductive healthcare personnel and facilities, as well as those with opposing ideologies.

There have been numerous specific attacks by specific pro-abortion groups against specific pro-life targets. Yet they are not mentioned. No mention of “Jane’s Revenge,” but watch out for the pro-al-Qaeda Malahem Cyber Army.

Update: An armed man was arrested overnight at the home of Brett Kavanaugh after expressing a desire to kill the SCOTUS Justice. We’ll have more details on tomorrow’s Brew.

The organized violence is already happening from one direction. And DHS whistles right past it.

This fits exactly what John Zmirak was talking about with his “American Anarcho-Tyranny” article Monday.

You thought the January 6 Select Committee hearing was about uncovering the truth about the greatest threat to democracy since the Civil War? Bringing light about a devastating “insurrection.” Somber. Serious Business?

Nah, even the New York Times admits Thursday’s prime time hearing allows Dems to “recast” their midterm message. Here’s the sub-title, with my brief additions: “With their majority at stake (partisan politics), Democrats (partisan politicians) plan to use the six high-profile hearings (long-form campaign ad) to refocus voters’ attention (partisan benefit) on Republicans’ (partisan politics) role in the attack.”  (While ignoring their own role in the J6 fiasco … to say nothing of the vindication of those protesting an election now proven stolen.)

Alex Chediak is back with “Ben Sasse on How to Really Fix Education.”