The Brew: A Merry Christmas to All, and To All a Good Morning! 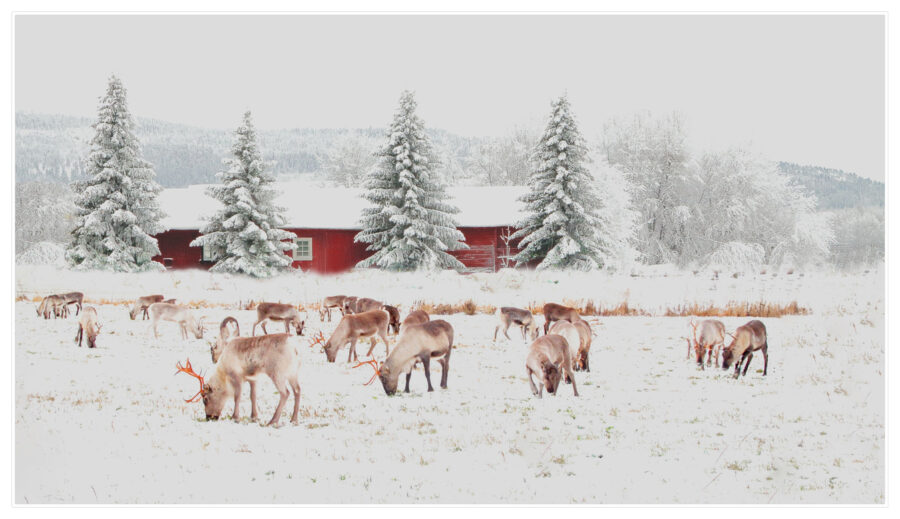 "Remember, Blitzen and Donner. Don't eat too much before we fly tomorrow night. Don't want you cramping up!"

This is our last pour of the Brew before Christmas. I know well that this time of year can bring melancholy as well as merriment. We understand that the massacre of the innocents is as much a part of the Christmas story as the shepherds and angels. But we also know the star that guided the Magi was against a deep, dark sky. And the light that burst forth from that cave in Bethlehem lights the world.

Yes, we are in dark, wicked, perverse … even bizarre … times. But so it was 2,000 years ago. The Enemy has his kicks. But we have Jesus. We can sing it like the angels. “Glory to God in the highest!” Or cling to it like Linus to his blanket.

The Stream Does Christmas

If you missed it, last year for Christmas I wrote “The Bethlehem Brew.”

But The Stream is offering plenty of new treats!

Joseph D’Hippolito offers “The Subtle Power of ‘Mary, Did You Know?”

David Marshall shares “Aslan in Asia: Miracles in the Ordinary.”

At 1 pm, Eastern, we have a great one from Alex Chediak called “Lessons on Trust From Zechariah and Mary.”

And there’s plenty more coming up over the next two days. So keep checking back to Stream.org and our Twitter and Facebook!

From the entire Stream and LIFE Outreach family, I pray you have a most Merry and Blessed Christmas.

J6 Could Have Easily Been Prevented, House GOP Investigation Shows

While Nancy Pelosi’s J6 Committee was strictly designed to pin all the blame on President Trump and enable Liz Cheney’s psychotic obsession with the man, the House GOP actually dug into the security conditions at the Capitol. What was their conclusion in “Security Failures at the U.S. Capitol on January 6, 2021”? The breach of the Capitol was completely preventable and was the result of Nancy Pelosi and her office refusing pleas to increase security. (This includes Pelosi rejecting Donald Trump’s offer of National Guard troops. Yes, Donald Trump is the only “insurrectionist” in history who tried to stop his own insurrection and was rebuffed by the woman calling him an insurrectionist. I told you we are in bizarre times.)

“I have no power over the Capitol Police,” Pelosi claimed after J6. That’s simply not true and Rep. Jim Jordan and four GOP colleagues have the receipts. As Just the News reports, they’ve got the emails and texts that demonstrate Pelosi’s “staff had direct contact with the officials who planned the security and even edited some of the plans and notifications in the fateful days before tragedy struck.”

Whistleblowers and internal emails detail how the intelligence was clear there would be trouble, and yet desperate pleas for help fell on deaf ears, “denied again and again.”

Pelosi was worried about the “optics” of having a strong National Guard presence. Why? On the January 6 anniversary, I posted three options:

Intel reports given to the U.S. Capitol Police indicated only an improbable or remote risk of violence from the Trump supporters. On the other hand, any time in 2020 when Trump supporters gathered in D.C., the Antifa/BLM types would attack them. Be it right outside the White House after Trump’s GOP acceptance speech, or at local restaurants after the events. (A sign we may be on the right track: D.C. businesses boarded up in November 2020 in anticipation of riots after a Trump win. They didn’t board up anything in anticipation of the MAGA Nation showing up January 6.)

It’s logical, therefore, that Pelosi would assume any violence January 6 would be instigated by Antifa/BLM.

It’s just a theory. But the only alternative is that Nancy Pelosi was thumbs up for a riot — particularly one that would stop the challenges to the swing state electors — knowing such trouble could be used as a weapon to crush Trump and Trump supporters nationwide.

Rep. Jordan says he wants Pelosi to testify about her role in the security arrangements for the Capitol on January 6. You can read the full report here.

Interestingly, the Capitol Police do not dispute anything in the GOP report. Only vowing to accelerate changes underway to improve security at the U.S. Capitol.

More Wokeness for the Marines: A Call to Eliminate “Sir” and “Ma’am”

The effort to turn the U.S. Marines into the faculty at Berkeley continue. The latest? The Corps is being advised to drop terms like “sir” and “ma’am” and replace them with gender-neutral identifiers. Why? To eliminate the “possibility of misgendering drill instructors.” The Marine Corps Times has the story. China’s creeping its influence around the world, Russia is threatening nukes, and that is what the Marines have to be worried about?

The Marines paid the Univ. of Pittsburgh $2 million taxpayer dollars to do the study on the effort to integrate Marine Corp boot camps. The report notes that the Army, Navy and Coast Guard already “de-emphasize gender in an integrated environment.”

Will the Marines accept the recommendation? “That’s going to take some effort,” Col. Howard Hall, chief of staff for Marine Corps Training and Education Command told the Defense Advisory Committee on Women in the Services earlier this month. Saying “Sir” and “Ma’am” is ingrained in the Marine culture. Said Col. Hall “Honestly, that’s not a quick fix. What are inculcating in our young recruits that will or will not be reinforced when they graduate and enter the fleet Marine force? So again, we want to avoid any quick-fix solutions that introduce perturbations down the line.”

“I’ll Be Home for Christmas … I Hope”

Some 113 million Americans are expected to travel over Christmas, according to AAA. That’s up about 3.6 million from last year. Key word there is “expected.” Winter Storm Elliott is making a mess of things, with at least 1,700 flights cancelled by midday Thursday and another 2,600 delayed. Thanks to blizzard conditions, high winds and the intensifying “bomb cyclone,” roads in much of the country will continue to be dangerous. The East Coast, which was getting soaked with rain, now has to worry about plunging temperatures turning wet roads to ice.

So for you 113 million traveling more than 50 miles, please, please be safe out there. Sure, in Hallmark Christmas movies, getting stuck travelling because of weather inevitably leads to romance and festive experiences … and sometimes a brand new home town. But that’s not usually the way it goes. However, we do wish you joy and safety as you go, and a glorious time with family and friends.

And yeah, why not some romance?

Taking us home, the one and only Andy Williams.

God bless you! And Merry Christmas!