The Bible’s Not Socialist. A Single Book Proves It 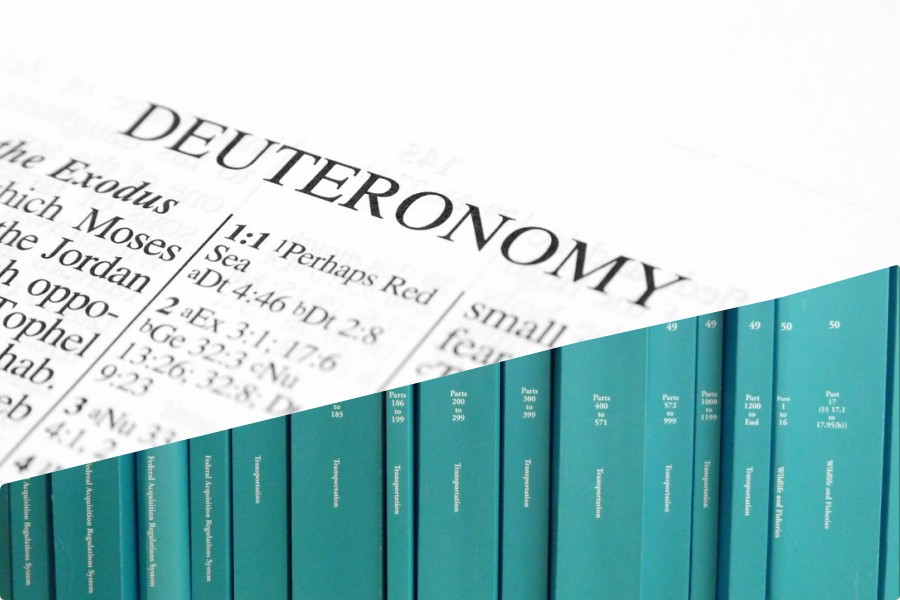 By Rob Schwarzwalder Published on September 30, 2019 •

“Jesus was a socialist.” That’s the claim of a professor at Occidental College, and a lot of other Christians. Of course, that’s silly. How do we know it’s silly? Because the book of Deuteronomy tells us what God wants our economic life to look like. And it’s definitely not socialist.

That’s why A Biblical Path for a Prosperous Society is so valuable. It shows how a whole economy can flourish by following biblical teaching. It’s a new book by Dr. Brian Baugus, an economics professor at Regent University. Brian’s both a colleague of mine and a good friend.

Brian points out that in the fifth book of the Old Testament, Deuteronomy, God gave us “a political-economic document.” He calls it “the most complete and thorough statement in the Bible of what a proper society looks like.” Brian explains: “God had told His people that He would take them to the Promised Land, which flowed with milk and honey. In other words, the land would be a place of wealth and prosperity if the people dedicated themselves to living by God’s laws and commands.”

The good news is that A Biblical Path is readable. It’s not written for microeconomists who can’t wait to read the latest edition of the Federal Tax Code. It’s for believers who want to understand how God taught the people of Israel to “prosper in the land.” And how these same pathways will, if followed, lead us to a stronger economy for ourselves and our children.

I recently interviewed Brian about the book.

Brian, one of your main arguments is that an honest legal system is a baseline for a good economy. Why is that so important?

First of all, God commands us to be honest. For example, all through the Old Testament, we see instructions about not falsifying weights and measures. Lying is forbidden by the Eighth Commandment: “You shall not bear false witness.”

Trust is the basic issue in any economy. When we exchange goods and services, we have to assume that we’re not getting cheated. And, if we are, that there’s an honest, clean court system that will hold the cheaters accountable.

The Bible has a lot to say about how the poor need to be treated fairly. Speak to that.

History teaches us that the weak are oppressed when the powerful misuse their positions. In the Book of Amos, for example, God condemns Israel for “trampling the head of the poor into the dust of the earth and turn aside the way of the afflicted” (2:7).

That’s also where an honest court system comes in. The Lord is very clear that judges should not take bribes and that the “needy should not be turned aside in the gate” (Amos 5:12). That’s the city gate being where legal judgments were given.

It’s also important to say that free markets provide better for the poor than any other economic system. When you combine ingenuity and opportunity with hard work and equality under the law, prosperity results. That’s how the poor become self-sufficient and really begin to thrive.

You also write about the importance of thinking about the future. Are there examples in the Bible about planning for the long term?

In Genesis 21, we’re told that Abraham planted a tamarisk tree in Beersheba. That’s amazing, once you realize that a tamarisk tree takes 100 years to come to full growth. That would have been long after Abraham died. He was planting that slowly maturing tree to show that we have to plan for the long term, setting a great example for his extended family.

In Exodus 31 and 35, there’s a fellow named Bezalel who is recognized for his ability as an exceptional metal worker. The Lord says He has filled Bezalel “with the Spirit of God” to “make designs for working in gold and silver and bronze.” God rejoices in us when we develop and use our abilities for His glory.

But we have to hone those abilities and gain skills through long-term training and practice. We need to plan for our futures and then cultivate our skills for use in the decades to come.

Today, though, long-term thinking seems to be in short supply. We’re hearing from a lot of politicians about how some form of socialism would be good for the country. What’s wrong with that?

First, the Constitution makes clear that the federal government has strong but limited functions. One of them is most definitely not taking from one group of citizens and giving it another. That’s theft, plain and simple.

It’s very clear that God ordains privately-owned property. Every inch of Israel was apportioned to someone. Stealing is strongly prohibited, with severe penalties proportionate to the kind of theft.

Consider the whole sacrificial and tithing systems. No one could offer anything unless they owned it.

It’s also a matter of stewardship. When I work outside on Saturdays, it’s not to take care of the yard down the street. I have a duty to care for what’s been entrusted to me and my family, so I work on my yard and garden. No one can care for everything equally, which is why we’ve been made stewards of the resources allocated to us personally.

Is there a particular passage that strikes you as capturing some of these points?

There are a number. Matthew 25 and Jesus’s parable of the talents is one. In Proverbs 31, we read about the virtuous woman. She cares for her family by engaging in commerce, investing in a field and planting a vineyard, and selling the beautiful garments she makes. She also gives generously to the poor. It’s a wonderful picture of diligent, creative, and useful enterprise and a model for all Christians who want to flourish in the marketplace.

Rob Schwarzwalder is a senior contributor at The Stream and a senior lecturer at Regent University. This interview has been slightly edited for clarity.

The lower illustration is by Janet Lindenmuth and is used under a Creative Commons license. It’s been cropped.

Did the Government Need to Kill Lisa Montgomery?