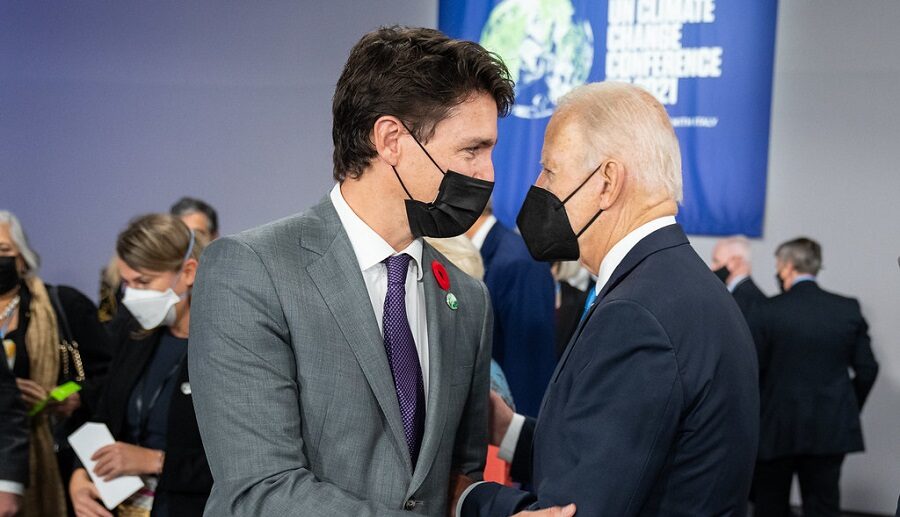 As soon as they got news of Russia’s invasion of Ukraine, Western elites dusted off their war drums. MSNBC may be the most hawkish network at the moment, but others aren’t far behind. “Fight for freedom,” their anchors and guests say. As if they weren’t a class of people who, as I recently noted here, are ideologically allied with the murderous Chinese Communist Party.

Putin is attacking Ukraine — despite its intimate ties to the superpowers of the West — because the West is weak. And what makes the West weak is tyranny, woke ideology, and a globalist class of rulers who explicitly detest their own nations and have made enemies of their people.

In the months leading up to Putin’s invasion, Western leaders pummeled their own people, blaming the spread of COVID-19 on pastors and volunteers and elderly couples who only wanted to be there for each other.

It’s been more than two years since the outbreak of the Chinese virus. But this very week, I read the story of an elderly woman in the midwest barred by government-bribed medical bureaucrats from her husband’s hospital room for over two months after his December COVID-19 diagnosis. All she wants is to sprinkle holy water on his chest, she says:

“It’s been hard. There’s days I have anxiety, and it usually comes out at night where I’m fearing I’m going to get a middle-of-the-night call that they told me he died, and I wasn’t there to hold his hand and say ‘I love you, goodbye.’’

Her story is commonplace, and a mild example.

Dissenters Have No Rights

They said the same about citizens (a huge share of America’s voters) who publicly express doubts about the legitimacy of the 2020 election, which was infamously mired in fraud and backroom dealing. “These threat actors seek to exacerbate societal friction to sow discord and undermine public trust in government institutions to encourage unrest, which could potentially inspire acts of violence,” the DHS said.

All this after White House officials and the Department of Justice coordinated with the nation’s education bureaucrats to announce that concerned parents pose a “domestic terrorism” threat because they attend school board meetings to complain of abuses and cover-ups at their children’s government-run schools.

One of the main inciting incidents? A father showed up at a school board meeting to confront officials who (we have since learned of a certainty) covered up his 14-year-old daughter’s rape, which took place on school property. The rapist was wearing a skirt when he sodomized her in the girls’ bathroom. On the school board’s agenda the day the father confronted them was a vote on whether to allow boys to enter girls’ restrooms as a matter of policy.

The Same in Canada

According to Canada’s Prime Minister Justin Trudeau, Joe Biden agreed with him over the phone that Americans should suffer consequences for donating to the “Freedom Convoy” of truckers who traveled to the Canadian capital to demonstrate against the nation’s COVID-19 regime.

Trudeau had threatened these truckers, the lifeblood of North American markets, with absolute ruin unless they submitted to forced injections of the Big-Pharma-Big-Government COVID-19 shot. To make sure they understood resistance is futile, he then invoked the wartime Emergency Act for the first time in Canada’s history to freeze citizen’s bank accounts, confiscate their property, and literally trample them under the hoofs of mounted police.

Think it couldn’t happen in America? Tell that to the hundreds of defendants in the case of January 6th, still languishing in cells near the capitol, some in solitary confinement, others reportedly beaten by guards, and many still wondering what they’re even being charged with. One woman’s government-appointed lawyer made her watch propaganda films and testify in court that she was once motivated by “racism” but now repents.

Keep in mind the “crime” in many of these people’s cases was sauntering into the capitol, politely greeted by police on their way in. All this to say nothing of the one casualty of the January 6th protest: an unarmed woman shot dead by a capitol guard.

Scores have already died on both sides of the conflict in Ukraine as Russian troops continue their incursion. Western pundits evoke images of Ukrainian families hunkering down in their homes, praying together in schools and churches, mothers wiping tears from their children’s cheeks.

War is ugly. And with emotions running high, those with the ugliest intentions and those most insulated from the brutal realities of war are often the first to collect themselves and begin directing the stunned public to their own advantage.

“Look at the cruelty of it,” they say, and then point to the villain of the drama. All too often, the goodhearted American public looks distractedly in whatever direction they point, then cries out for vengeance. More war.

We saw this in the lead-up to the first Gulf War, when our leaders told us horror stories about Iraqi aggressions in Kuwait. We saw bad actors do the same immediately after the 9/11 terror attacks. And as the U.S. invaded Iraq. And in Syria.

But this time around, it’s different.

This time, the public is not stunned and distracted. Instead, we’re canny, careful, and on high alert after more than two years of watching our elites take every advantage they could, over the dead bodies of as many of us as it takes to pave the way for their cynical, inhumane vision of the future.

We know from painful and immediate experience that these oligarchs are ruthless, and unbound by any concept of honor or national loyalty. And we know they are capable of acting as one — betraying our well-being and serving instead a kind of global monostate answerable to no one but themselves.

So when Joe Biden took to the podium Tuesday to declare his deep love for the “thriving democracies” of the West and to tell us they are under attack, the public didn’t look vengefully in the direction of the Russian aggressor he pointed to. Instead they looked keenly at their own democracy, which is not thriving, and then back at their failed leader, who belongs to the globalist ruling class that is actively subjugating it.

With a resounding vote of no-confidence gathering around him like a cloud, Biden added moments later: “Defending freedom will have costs for us as well, here at home. We need to be honest about that.” We rolled our eyes. You could almost hear the nation groan.

Never before has the clamor of war drums thudded so hollow.

As I write this, an American convoy of truckers — inspired by their friends in Canada — is headed for our own nation’s capital to demonstrate. Rumor has it they’re already beginning to arrive in DC.

If recent events are any indication, might we expect to see citizens of our “thriving democracy” brutalized and imprisoned for peacefully demonstrating outside of Joe Biden’s first State of the Union address on March 1? It seems likely.

And inside our nation’s tactically fortified capitol, flanked by jagged, colorless fences and jackbooted troops, Biden will again appeal to a good-natured loyalty and trust that he and his cohorts have all but eradicated from our land: “Will you fight for our freedoms?”

Yes we will. Until we get them back from you.